Samsung to launch Galaxy A70 next week; Galaxy A80 launch in May

Samsung is looking to challenge the Chinese budget smartphone makers like Xiaomi, Oppo, OnePlus in India with its Galaxy A-series smartphones 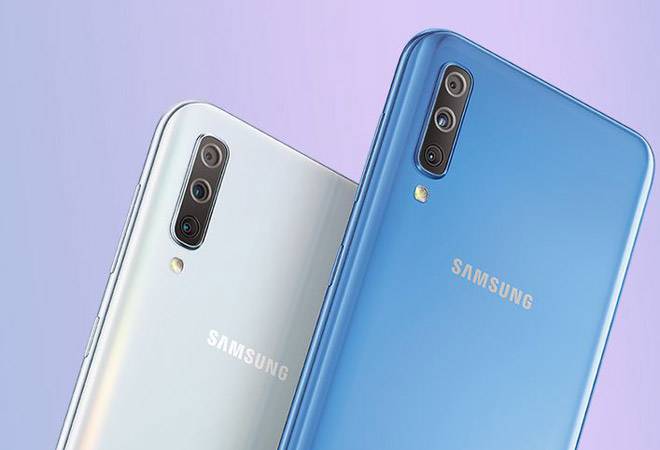 Samsung is looking to challenge the Chinese budget smartphone makers like Xiaomi, Oppo, OnePlus in India with its Galaxy A-series smartphones. The South Korean electronics major is targeting $4 billion in revenues from its Galaxy "A" series of phones in 2019.

As far as specifications of Samsung Galaxy A70 are concerned, the phone features 6.7-inch Infinity-U display. It is powered by a 2.0 Ghz octa-core chipset paired with 6GB or 8GB of RAM and 128GB of internal storage, which is expandable up to 512GB via a microSD card. The Galaxy A70 runs on  the One UI based on Android Pie.

The Optics of Galaxy A70 includes a triple camera setup with a 32MP primary camera with f/1.7 aperture, an 8MP ultra wide-angle camera and a 5MP depth camera. For the selfies, Galaxy A70 sports a 32MP camera with f/2.0 aperture. The Galaxy A70 also houses a large 4,500mAh battery with the support for 25W fast charging over USB Type-C.

Samsung is also planning to unveil Galaxy A80 next month in May. The Galaxy A80 comes with a refreshing new design and has a sliding and rotating camera setup. The Galaxy A80 will be powered by Qualcomm's brand-new Snapdragon 730G SoC, which is built on 8nm manufacturing process. As far as specifications are concerned, the Samsung Galaxy A80 has a 6.7-inch full-HD+ (1080x2400 pixels) Super AMOLED display or the "New Infinity Display".

As far as the optics is concerned, the Galaxy A80 comes with a triple camera setup that includes a huge 48MP primary sensor, an 8-MP secondary sensor with an ultra-wide-angle f/2.2 lens, and a 3D depth camera. The camera also comes with several modes like super slow mo, live focus for photos as well as videos and hyperlapse. For the front camera, there is also the AR Emojis feature.

Also Read: Samsung Galaxy A80 with triple rotating camera launched; here's all you need to know

Samsung launches Galaxy A2 Core for Rs 5,290; to take on Xiaomi Redmi Go in India

Honor to launch Honor 20i on April 17; here're the key features