We've had ample evidence of Apple's three new smartphones that are coming later this year but there's still a lot to decipher. A new leak has popped up on Twitter which shows the front panels of three new iPhones that are launching this year. 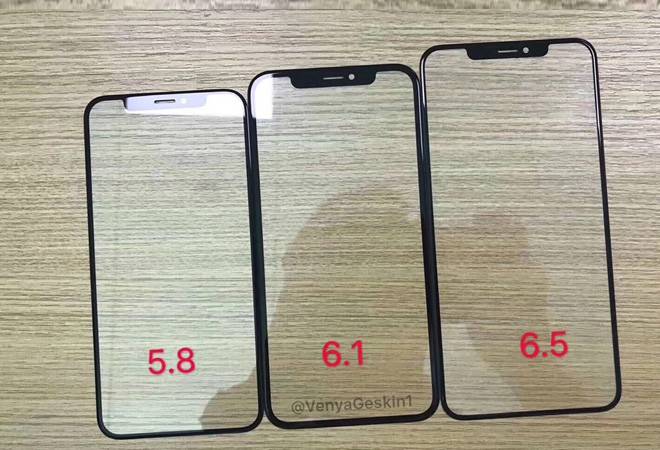 We've had ample evidence of Apple's three new smartphones that are coming later this year but there's still a lot to decipher. A new leak has popped up on Twitter which shows the front panels of three new iPhones that are launching this year. The panel sizes are in line with the previous leaks that show one panel with a 5.8-inch display, another with a 6.1-inch display and the third with a 6.5-inch display.

The image sourced from a Twitter user, @VenyaGeskin1 shows that all three phones have a similar notch on top but the bezels on the 6.1-inch panel seem slightly thicker than the other two. Reports from popular analyst Ming-Chi Kuo suggests that Apple will be launching a cheaper variant of the new iPhones. This thick bezel variant with a 6.1-inch screen is expected to be that phone. The device will come with an LCD display panel which is being developed by LG.

The other two phones will come with an OLED panel which will be Apple's flagship frontier for this year. Despite the bezel size being similar, if not identical, the bigger 6.5-inch panel looks much slimmer due to the sheer size of the display. This is bound to yield a much better screen to body ratio for the Plus version.

2018 6.1-inch LCD iPhone has thicker bezel. I reported this a month and a half ago. https://t.co/SrvNUofPZapic.twitter.com/FtcwKwgUh5

Earlier this month, the same analyst provided price estimates for the cheaper 6.1-inch iPhone. Kuo claimed that Apple has reduced the pricing of the iPhone that uses LCD by ditching the second camera module and pressure sensitive 3D touch. The iPhone is expected to be priced in the range of $600-$700 which roughly translates to Rs 41,000-Rs 48,000. Earlier, the same analyst has estimated a slightly higher price point but Apple's recent changes have brought down the price of the device. In India, the device is expected to be priced substantially higher than the launch price in the US.

In terms of features and design, the relatively cheap iPhone is expected to be closer to the iPhone X that the iPhone 8 and iPhone 8 Plus. Furthermore, the analyst claimed that Apple will continue to manufacture iPhones with LCD displays even after the launch of the new 6.1-inch iPhone.
TweetYoutube
Tags: Apple | iPhones | Apple iPhone X | Cupertino | Ming-Chi Kuo | LCD iPhone X | iPhone 8 | iPhone 8 Plus | iPhones