Over the last two months, there have been over 30 new smartphone launches (minus variants) in under Rs 20,000 price category 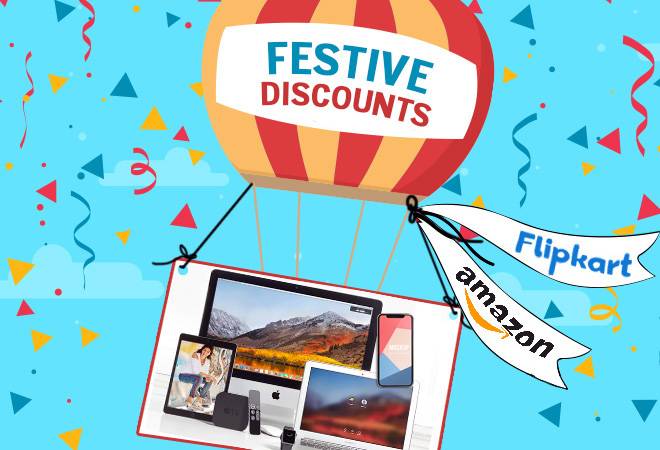 Contrary to reports of a slowdown and a dull festivity, there has been a spurt in the sales of smartphones, televisions and consumer durables. If not a necessity, many consumers prefer to shop during the festive season that is considered the most auspicious time of the year. Companies come up with new launches and almost every brand offers great deals and discounts.

"The purchases consumers make during these days are part of festive celebrations. 25 to 30 per cent of the industry sales happen during the festive season," says Suchit Subhas, Director - Large Appliances & Furniture, Amazon India.

Over the last two months, there have been over 30 new launches (minus variants) in under Rs 20,000 price category. Ajey Mehta, Vice President India and APAC, HMD Global says, "For our industry, 20 per cent of the annual sales happen around this time of the year."

The recently announced Redmi Note 8 Pro and Redmi Note 8 that went on sale for the first time on October 22 were sold out in seconds. Raghu Reddy, Head, Category and Online sales, Xiaomi India says, "Diwali month registers close to two times the sales of an average month for smartphones. Most of smartphone volumes during the month come just ahead of Diwali."

Flagship smartphones are no different. Aggressively priced new Apple iPhone 11 has been in great demand. The base model is priced at Rs 64,900 but after various cashback deals and bank offers, it was available for less than Rs 60,000. Currently, the iPhone 11 model is out of stock not just in offline channels but also on all popular e-commerce portals including Amazon, Flipkart and Paytm. The phone will be back in stock on Amazon only on October 27.

What made the festive deals even sweeter were the cashback, discounts and freebies. For instance, in the budget smartphone category, discount offers worked well. The Realme C2 2GB+32GB model priced at Rs 6,999 was available for an effective price of Rs 5,399 during Big Diwali Sale on Flipkart. Oppo, on the other hand, offered Complete Damage Protection on the recently launched Reno2 series and One-Time Screen Replacement for A9 2020 for six months along with cashback and zero-down payment offers. This turns out to be a great value-add considering screen replacement costs more than half the price of the device.

Thanks to the sudden influx of affordable smart TVs, even leading players have been aggressive. Consumers buying televisions are in for a treat, as they not only get to choose from the wide variety of options at different price points but also can avail of discounts and cashbacks. A decent 32-inch smart TV running Android TV operating system has been available for less than Rs 10,000. iFFALCON by TCL 32 inch HD Ready LED Smart Android TV with HDR 10 And Google Assistant was retailing for Rs 9,999 along with 10 per cent instant discount on SBI cards.

Xiaomi has achieved a record-breaking sale of over 5 lakh Mi TVs in just 24 days starting September 28 across online and offline channels. While 32-inch and 43-inch TV panels are most popular in the affordable smart TV category, 55-inch and above are in great demand in the premium segment.

Once dominated by Samsung, Sony, LG and Panasonic, players such as VU, Xiaomi and OnePlus are increasingly eating their share. Contrary to the belief of Chinese smartphone companies launching affordable smart TVs, OnePlus had adopted a completely different approach. The company opted for a premium design and panel for its 55-inch base model priced at Rs 69,899 and the Pro model with built-in soundbar. A fancy-looking table mount has been priced at Rs 99,8999. "OnePlus TV has already become the best-selling smart TV in the premium segment in the ongoing Amazon Great Indian Festival season sale, leading with 42 per cent of the segment share," says Vikas Agarwal, General Manager, OnePlus India.

OnePlus ventured into the offline market within a month of the TV launch and has a special partnership with Reliance Digital to make the TV accessible in offline retail across major cities and towns in India.

Home appliances are also selling like hotcakes this year. LG had targeted 5,000 crore sales during this Diwali. Vivek Babu, VP-Home Appliances, LG Electronics India says, "We are witnessing a robust growth across categories and our overall growth is around 35 per cent. Growth is very impressive, especially for premium products. In the washing machine category, there is a good sell-out for high capacity machines of 7,8,9 KG above both in front and top-loading. Similarly, in refrigerators, we are seeing good traction for 330 litters and above. Premium category growth is above 40 per cent."

According to Amazon, after the first of the three sets of Great Indian Festival sale, the large appliances category witness an 8x growth and almost half of the sales came from lower-tier towns powered by brands such as Godrej, LG, Samsung and Whirlpool. Amazon says 50 per cent of the customers availed of EMI to stretch their budget and every one in five customers upgraded their appliances with an exchange.

Right ahead of the festive sale kick-off, Flipkart had introduced comprehensive 'Complete Protection' service plan for home appliances that covers TVs, refrigerators, air conditioners and washing machines sold on its platform. The idea behind this plan was to build stronger trust and value proposition for the customers as it will address all possible types of customer issues through a single window, both within and beyond the warranty period of the product. This new plan includes doorstep repair, replacement and refund option, powered by Jeeves, Flipkart's customer service arm. Such offers help in winning consumer trust.

"Strong product portfolio backed by good consumer offers and attractive consumer finance options are some of the factors behind this growth," adds Babu.

Over the last few years, sales during the festive season have been shifting from brick-and-mortar to e-commerce platforms. Even though online sales still contribute less than what offline sales generate, consumer durable and smartphone manufacturers are still coming up with special deals and models for e-commerce platforms.

To achieve the record-breaking sales in consumer durables and large appliances, Samsung is focussing on both offline as well as online retail. "We are present wherever the consumer chooses to buy from. To further strengthen our retail network, we increased 25 per cent of investments in premium retail experience and a 42 per cent increase in digital marketing spends compared to last year."

Ashok Gupta of Delhi-based home appliances store says, "sales have started to pick up for last ten days. However, be it a refrigerator or a television, when walking into a store, consumers have limited options to choose from, whereas online mediums offer huge variety. That's one of the biggest reasons why they have started shopping on e-commerce platforms." To top this all, the ease of delivery and easy exchange and return policies are something consumers prefer.

The footfall at offline stores has started to pick during the last couple of weeks whereas, for e-commerce, it started with the season's first festive sale that happened towards the end of September.