Oppo R19 could have a 48-MP rear camera along with a pop-up selfie camera. The smartphone is expected to be released in India soon as Oppo F11 Pro. 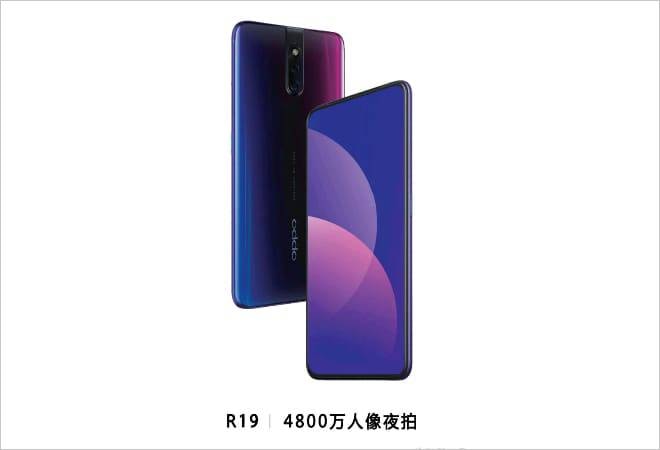 An image of Oppo R19 has appeared online, and taking the megapixel craze forward, it reveals that the Oppo smartphone could have a 48-MP rear camera along with a pop-up selfie camera. The smartphone is expected to be released in India soon as Oppo F11 Pro.

Also Read: Oppo K1 to go on sale today at 12 pm; all you need to know about this affordable gaming smartphone

The image, which has been leaked by SlashLeaks, shows a phone in a poster with a caption in Chinese which reads - "4800 million and night shots". This hints at the 48MP sensor with an ability to shoot bright photos in low-light conditions. The leak also shows a bezel-less screen and a gradient panel.

As far as the front of Oppo R19 is concerned, there are no notches and nearly non-existent bezels. This means the phone will feature a Vivo NEX-like pop-up selfie shooter. Reportedly, the phone's pop-out camera slides out from the middle.

Along with the Oppo R19, Oppo is expected to launch Oppo R17 Neo in India soon. The R17 Neo features a 6.41-inch Full HD+ AMOLED on-cell display offering a resolution of 1080 x 2340 pixels and an aspect ratio of 19.5.9. The smartphone is powered by an octa-core Snapdragon 660 processor manufactured by a 14nm process.

As far as specifications are concerned, Oppo R19 is expected to be powered by the recently-announced Qualcomm Snapdragon 855 SoC, paired with 6GB or 8GB of RAM.

Alexa gets support to stream over 350 radio stations in India