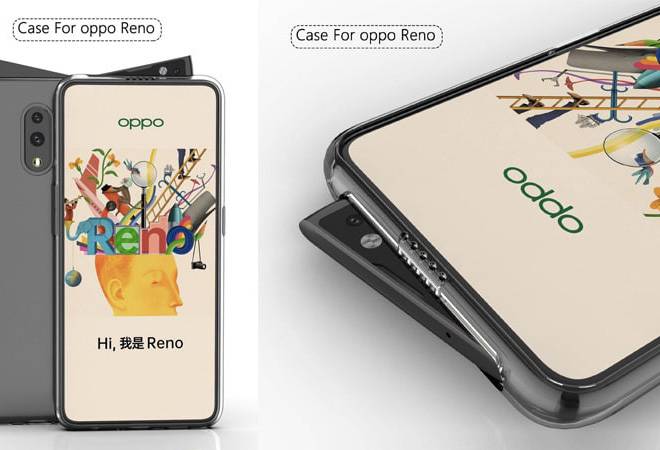 Oppo's sub-brand Reno is doing everything to get rid of the dreaded notch. The latest case leak has confirmed a new wedge-shaped pop-up selfie camera. Oppo's upcoming Reno branded smartphone will be powered by Snapdragon 855 chipset and will come with Oppo new 10x zoom technology with a periscope design that was shown off at MWC 2019. Furthermore, the Oppo's Reno phone will house a 4,065mAh battery.

Meanwhile, multiple leaks have suggested that there could be several variants of the Reno phone with different processors. Brian Shen, Oppo VP, took to Weibo to reveal the other variant of the smartphone referred to as the standard variant. This one could be powered by the Qualcomm Snapdragon 710 SoC and will use a heat-conducting gel and graphite sheet to dissipate heat. The standard variant could be a gaming centric phone as the cooling methods would help to keep Oppo Reno phones from getting warm.

The case renders of Oppo's Reno smartphone also shows wedge-shaped camera that houses selfie flash. The standard variant seems to have a dual camera setup and the triple camera setup could come with the Reno smartphone powered by the Snapdragon 855 SoC. However, both these variants are rumoured to sport the Sony IMX586 48-megapixel primary camera. The Oppo Reno is also said to be capable of 10X hybrid zoom. The zoom techmology was showcased by Oppo at the MWC 2019. There could also be a 5G variant with X50 modem.

Chinese phone majors are creating new sub-brands to target different type of customers. Earlier this year, Vivo announced a new sub-brand 'IQOO' at hardware mobile gamers. Xiaomi already has two sub-brands in POCO, focused on selling premium phones at mid-range prices, and Redmi for price conscious customers. Huawei already has a successful sub-brand in Honor which was announced in 2013.