The Poco M3 has been launched in India as company's new and this year's first smartphone. The highlights include Qualcomm Snapdragon 662 SoC, 6000 mAh battery and a full HD panel. 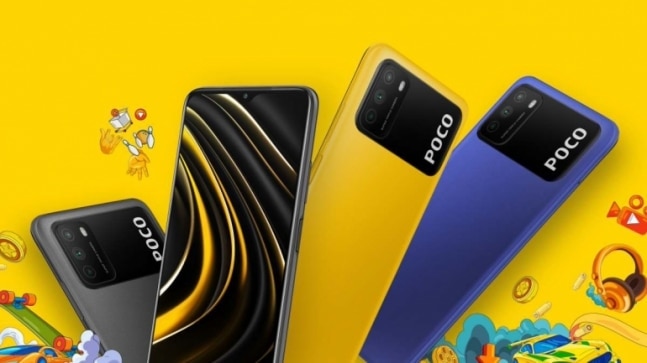 Poco M3 has been launched in India.

The Poco M3 has been launched in India as company's new and this year's first smartphone. The launch comes just two days before Realme is scheduled to launch the X7 and X7 Pro in the country. The Poco M3 targets customers with tight budget and brings several exciting features at an aggressive price point. The smartphone was launched in global markets in November last year but comes with some changes to India. The highlights include Qualcomm Snapdragon 662 SoC, 6000 mAh battery and a full HD panel.

In India, the smartphone has been launched in two variants 6GB RAM, 64GB internal storage and 6GB RAM, 128GB internal storage. The base model is priced at Rs 10,999 while the 128GB variant will cost you Rs 11,999. Both the variants will start selling on Flipkart, starting February 6, 2021. Poco is offering a bank discount of Rs 1000 after which the both the models will be affordable.

The smartphone has been launched in three colour variants Cool Blue, Poco Yellow, and Power Black. It will succeed the Poco M2 and the Poco M2 Pro launched last year.

The Poco M3 features a 6.53-inch FHD+ (1,080 x 2,340) IPS LCD panel with a peak brightness of 400 nits. The screen is protected by a layer of Corning Gorilla Glass 3. It houses the front camera in a waterdrop-style notch. The smartphone is powered by a Qualcomm Snapdragon 662 chipset which features four Kryo 260 Gold cores clocked at 2.0GHz, four Kryo Silver cores at 1.8GHz, and an Adreno 610 GPU.

It is worth mentioning that the 64GB RAM variant of the smartphone comes with UFS 2.1 RAM, whereas the 128GB version ships with UFS 2.2, which is slightly faster.

When it comes to photography, the Poco M3 is equipped with a triple rear camera setup comprising of a 48MP primary sensor, a 2MP depth sensor, and a 2MP macro lens. Video recording capabilities are locked at 1080p 30 FPS. On the front, it gets a 8MP selfie camera that can record videos at 1080p 30 FPS.

The smartphone also packs a 6,000mAh battery that supports fast charging at 18W.