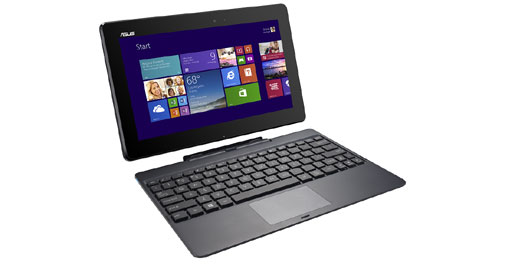 Tablets are steadily eating into the laptop market. But some maintain a tablet can't really replace the primary laptop on which they do their really important tasks. The touch screen keyboard is not comfortable for sustained work. To remedy this, Asus has been coming up with Android hybrids, where the tablet comes with a detachable keyboard. Now, it has launched a Windows hybrid, the first to have the latest Intel Atom processor and Windows 8.1.

The Asus T100 has a decent design. There is a 10.1 inch display with 1366 x 786 p resolution. The back is a glossy shining plastic. The use of plastic has kept the weight down to 550 grams but the tablet will be prone to retaining fingerprints and scratches. There is, of course the detachable keyboard.  When docked, the screen can be adjusted as in a laptop. But it can only be tilted back to a certain angle that can take the weight of the keyboard.

The keyboard dock has a matt finish with a row of shortcut keys above the number keys. There is only one USB port, which is hardly enough. A micro MDMI video output, a microSD memory card slot, headphone jack and microUSB port are placed on the right panel of the tablet. It can be charged with a universal charger. When docked on the keyboard, the compact laptop that looks similar to a netbook and weighs around 1.07 kg.

The device has a decent touch response and excellent viewing angles. It is also comfortable to use as a stand-alone tablet. We docked it on the keyboard to type documents and emails. For the first few minutes, we had problems while typing as the keys are placed very close together, but after some use we got used to it. However, the trackpad wasn't really comfortable to use.

Just like other machines running on Windows, the Asus T100 can be comfortably used for handling documents and presentations. It scores full marks on the multimedia front as well. The Full HD video playback was smooth and was further enhanced by the loud audio output. There is a 1.2 MP front camera for video calling, but no rear camera.

On a single charge, the battery lasts for about eight hours during regular use that could include browsing the web, watching movies and videos and working on documents.