Oppo has started rolling out ColorOS 12 to Find X2 and Reno 6 Pro series smartphones in India.

Android phones have improved over the years in almost every category, but perhaps the most crucial is the software. Major smartphone brands are now successful in pushing out new Android versions to their high-end phones right after Google's Pixel phones. Oppo is one of those brands, which recently started rolling out the latest Android 12 operating system to its phones with ColorOS 12. The first one to get it is the Find X3 Pro, but you cannot buy it in India. Don't worry, the ColorOS 12 is also now available for the Find X2 series and Reno 6 series phones.

ColorOS 12 is available for anyone who is enthusiastic enough to let go of one thing: the software is in beta. This means the software is not in its expected shape right now, and that will take some time. The beta versions are meant for testing, which is why it is not recommended for everyone but those who can live with the idea that their phone can run anytime into a problem. Well, the chances of that happening are low because companies like Oppo have improved their near-launch Android versions. ColorOS 12 is no exception.

Oppo's Find X3 Pro was the first phone to receive the update, but sadly, the company never launched it in India. What you have is last year's Find X2 Pro, alongside Reno 6, Reno 5, F19, and select A-series phones. And you can now install ColorOS 12 beta on at least three phones - Find X2, Reno 6 Pro 5G, and Reno 6 Pro 5G Diwali Edition. I spent some time with ColorOS 12 to find out if it a good improvement over ColorOS 11. I used the Find X3 Pro that was available for just media, but the ColorOS 12 version for Find X2 Pro and other phones will be nearly identical. 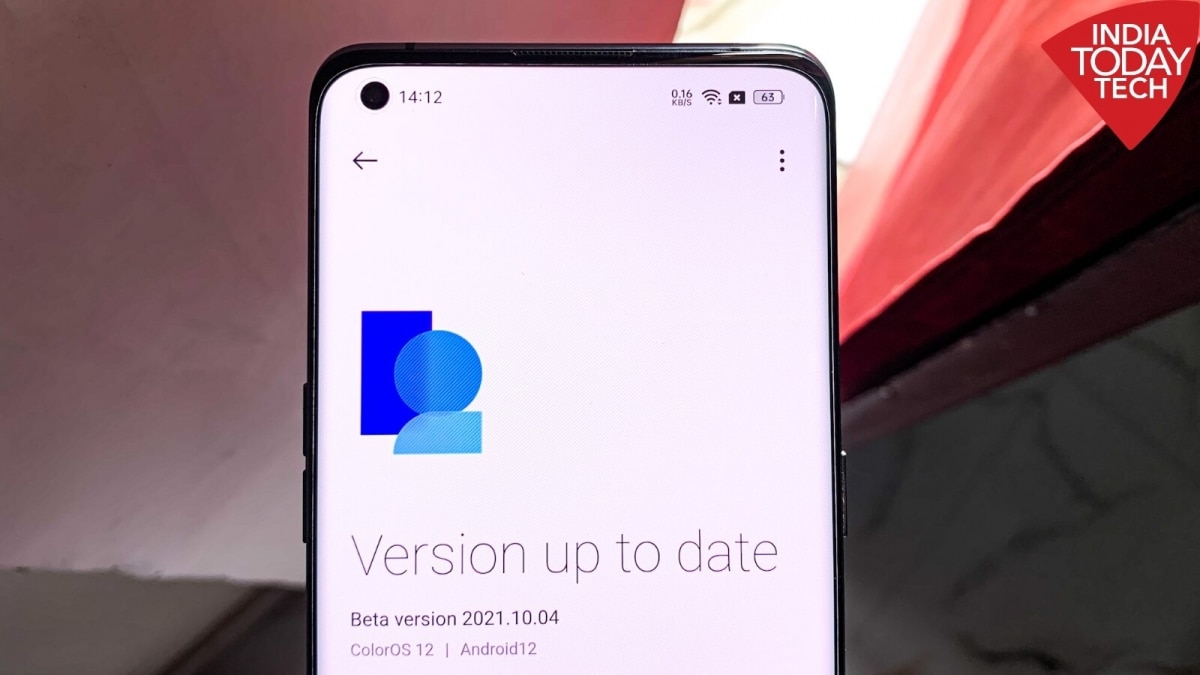 Oppo has embellished Android 12 with an interface that not only looks tight and streamlined but also prettier. The white space enhances the look, while the subtle animation makes the experience better. The biggest thing of beauty here is the collection of wallpapers, which I totally loved. You have both dynamic and status wallpapers that you can choose from, but no matter what you choose, your phone's screen is going to end up looking a lot fancier with them. That is one thing. The other one is the appearance of app icons. Although there is an option in the Personalisation tab of settings of your phone that lets you customise each element of the UI, the default one tries to give you a homely feeling. Apart from the standard icons for third-party apps, those for various settings now have a colourful background.

For people who love patterns, Oppo has done magic here. A single colour will be applied to every element of the UI, giving a sense of harmony, which I am all in for. It is similar to the Material You design that is exclusive to Pixel phones now. You can also choose any colour to apply system-wide from a photo or any element that you like through a picker. ColorOS 12 will customise the entire theme according to that colour, but you may get bored soon because of limited options.

Oppo's ColorOS 12 emphasises legibility more than anything, and that is true in any language you select. Oppo's linguistics team has managed to make as many as 13 Indian languages available for use system-wide in ColorOS 12, and that is a great step towards giving more control to users in India who speak different languages. You can also pick from a decent range of fonts, although I like the OPPOSans font the most. I changed the language from English to Hindi and the translation is on point. However, the purity of language here may be a problem for some millennials who are used to speaking Hinglish. Oppo does not have Hinglish as a system language yet, but I hope it will be there someday now that even Google recognises it as important, so much so that Hinglish will soon be available for Google Pay users in India. Coming back to the topic, using ColorOS 12 in different languages is a decent experience, but it could be better. For instance, there is still some weird text wrapping that Oppo can fix. I also found truncation happening for some elements in the UI.

App windows now look cleaner than before, all thanks to the design language of Android 12. The letters in names now have more depth to them, sometimes enhanced by the shadow. Oppo has used Quantum Animation Engine 3.0 to give apps new unsplashing animation when you open them. When you close them, they wrap themselves in the dock smoothly. The icons no longer have the boring design as they now show 3D animations when you open them by tapping or returning to the home screen. Returning to the home screen is still the same: you can either go for the on-screen buttons of "Home", "Back", and "Menu" - or you can switch to gestures where a swipe-up from the bottom of the screen will take you to the home screen. That is all very neat.

Smartphones with AMOLED displays will have the option to use their photos on the Always-On Display as silhouettes. They are called Portrait Silhouette in ColorOS 12, but people who know about OnePlus will find it familiar because it is just a renamed version of Canvas that you see in OxygenOS. The best thing about custom software is that you get extra frills that stock Android cannot offer. These are things like the three-finger swipe for taking screenshots, a sidebar to access the most-used apps, a calculator tool in the notification panel, a device maintenance app, and more. ColorOS 12 has plenty of these apps and they will all make your Android experience a lot better.

Take, for example, the Floating Window, which you can use to multitask. You could be playing Battlegrounds Mobile India and chatting with your pal on WhatsApp through a floating window. You can also drag and drop using this functionality. The transparency of the window is on point just so the content in the backgrounds does not get obscured. You can customise the transparency and the size of this window. The Smart Sidebar now lets you translate any content into the language you want. That is super convenient. There is also a Smart Sidebar feature that will keep streaming apps running in the background, so you can, after all, listen to YouTube videos without a Premium subscription.

Android 12's bubble notifications are available too, and work for messaging apps decently. When a new message arrives, WhatsApp's app icon will just pop up on the screen with the badge count of notifications. The rich power menu is also there, but I could not test it. 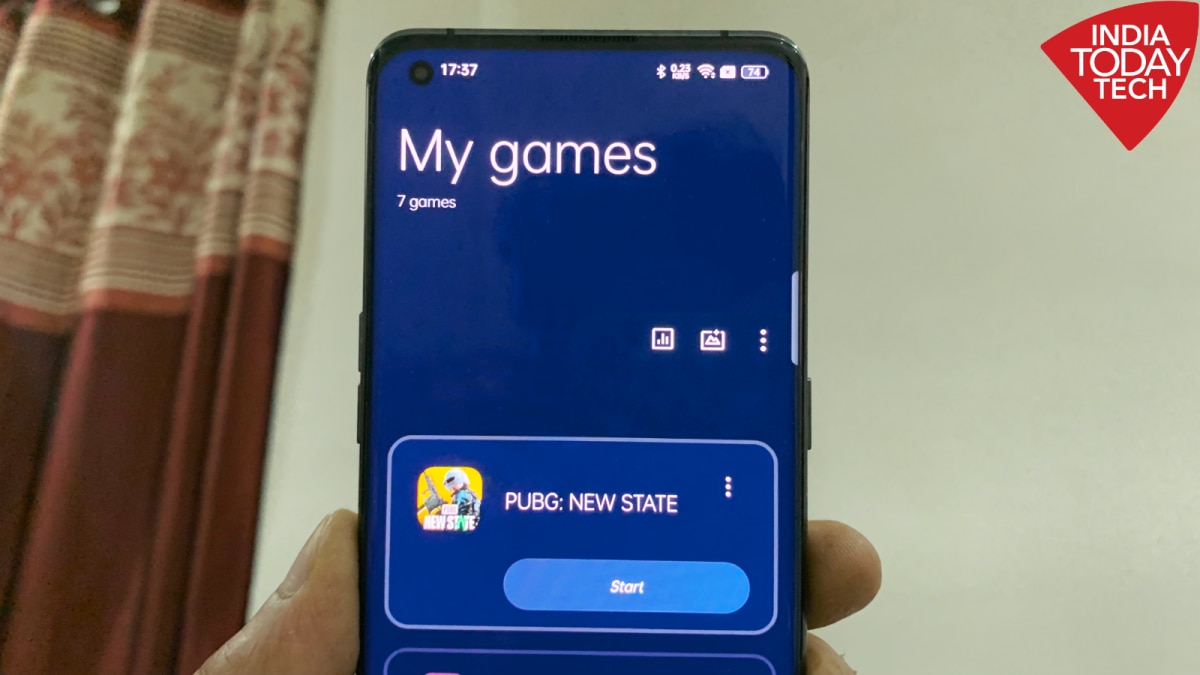 Talking about games, you have a Game Center where you find the popular and most-downloaded apps listed for download. However, there is another Games app that will let you make customisations and tweak phone settings to ensure the best gaming experience. I find it weird that the OS has two separate apps for games, but this is the beta version we are talking about. Hopefully, the final version will have just one app for games.

The battery optimisation app now tells you different estimated times for different battery modes, along with letting you customise each one of them per your preference. The Safety and Emergency setting is more intuitive and lets you set up contacts and do more about when you are stuck in an emergency. For better privacy, you have the Android 12 feature of the notification dot that appears on top of the screen whenever an app tries to access the phone's camera or microphone. You also have the Privacy Dashboard that logs what your apps access at different times.

ColorOS 12's Photos app will show your thumbnails of your photos that you choose to be sorted in your preference. Oppo will offer you to keep your gallery in sync with your HeyTapp account, but you can choose otherwise if you do not want that. The photo editing tool has all basic and advanced options, good enough for anyone who wants to do editing before posting photos online. The tools here are quite up-to-date, so I never felt the need to download any other editing app on the phone - unless, of course, I needed to apply a specific filter. The Photos app is now a lot better and I think this is good news for Oppo phone users. Oppo's ColorOS is one of the most mature custom skins and its new version that is based on Android 12 leaves no stone unturned to make sure that its users get everything they expect out of a phone. That includes the basic design, as well as the tricky features that you cannot find on Pixel phones. ColorOS 12 has begun to feel more like OxygenOS and that is a good thing now that OnePlus is merged into Oppo. OxygenOS's fast transitions have made their way to ColorOS, which is one of the most stable operating systems.

The strength of ColorOS 12 is everything about it, but the fact that there is still bloatware may compromise the experience of premium phone users, at least, if not all.

Oppo has come a long way to making a holistic software, but there are still a few chinks in the armour. Hopefully, they will be out once Oppo realises it has to serve customers at any expense, even if it means losing sponsorship for third-party apps. But that may take place sometime later.

For now, ColorOS 12 is the shiny new thing for your Find X2 and Reno 6 Pro phones. The rollout will widen over coming weeks to more Reno phones, F-series phones, and A-series phones. But remember this is the beta version we are talking about, so if you do not want an unexpected situation, wait for the stable rollout.