Meta has confirmed that a new feature for Instagram will soon roll out. The feature is expected to protect users from rising incidents of cyber flashing and sexual harassment.

Instagram is working on developing a user safety feature which will protect users from receiving unsolicited nude photos in their direct messages (DMs). While social media bridges the gap in communication between people, it has also made it easier to harass people. Cyberflashing is reportedly one such crime that impacts millions of women around the globe. In order to filter out unsolicited and unwanted nude photos, Instagram is developing a feature which will shield people from explicit content.

According to the Verge, Meta confirmed that the feature is still in the early stages of development. The new "Nudity Protection" feature is similar to the "Hidden Words" feature which was launched by Instagram last year. The feature allows users to automatically filter direct message requests containing offensive content.

Meta is reportedly going to use machine learning to prevent nude pictures from being delivered on Instagram. "We're working closely with experts to ensure these new features preserve people's privacy while giving them control over the messages they receive," says a spokesperson from Meta.

Alessandro Pauzzi, a developer from the company, also shared a sneak peek of the new feature on Twitter. Sharing the screenshot on the microblogging site he wrote "Instagram is working on nudity protection for chats. Technology on your device covers photos that may contain nudity in chats. Instagram CAN'T access photos." 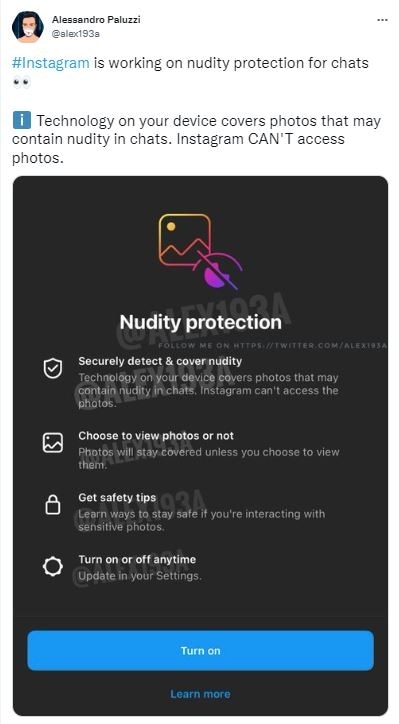 From the shared screenshot of the new feature, it is clear that the users will have the option to view the received photo or other media if they want it. Users will also have the choice to enable or disable the feature.

Meta will share some more details about the feature in the coming weeks.

In the last couple of years, cases of cyber flashing and bullying have increased on social media sites. Of all the apps, Instagram is one where such incidents have become fairly common. According to a YouGov poll in 2017, more than 40 per cent of young women have received unsolicited photos of a man's private parts or uninvited graphic photos. A survey by Glitch revealed that 17 per cent of women had been sent unsolicited pornography in June or July 2020.

While countries like the US and UK have laid down strict laws against cyber flashing, India deals with related cases under its cybercrime laws.