WhatsApp has been long rumored to be working on adding a call and video call button to the web version of the app. 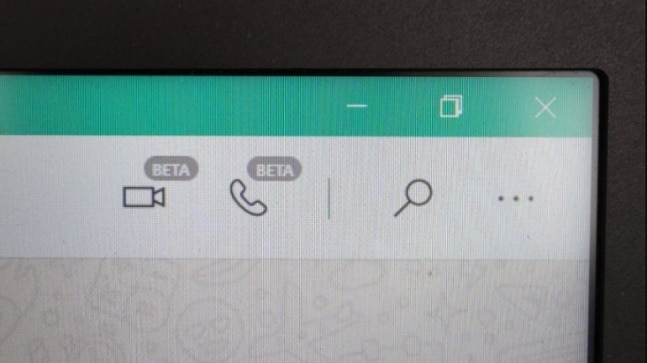 WhatsApp has been long rumored to be working on adding a call and video call button to the web version of the app. It is now believed that the feature is being slowly rolled out to some of the web users. Users took to Twitter to share the screenshot of the new feature.

A verified Twitter user by the name of Guillermo Tomoyose shared the screenshot of the latest WhatsApp feature. In the picture, you can spot the voice and video call buttons with beta written over that have appeared on the web version of the app. He said that the feature is available in Argentina.

Wabetainfo confirmed the claims of Tomoyose and reported that some users have spotted Beta Voice and Video Calls in the chat header on WhatsApp Desktop because the feature is being slowly rolled out. But the features tracker also confirmed that being a beta feature, it will only be available to very few people.

"WhatsApp is rolling out beta calls for specific users but unfortunately, being a beta feature, it's available for very few people. We hope you're lucky but, if it doesn't, don't worry: every day more users receive that activation and, at present, WhatsApp Desktop has a higher priority," the Wabetainfo read.

Wabetainfo had earlier shared details about how the feature is going to look when it is officially rolled out. The screenshots shared by the WhatsApp features tracker show that a new window will open up every time you receive a call or try to make a call through the WhatsApp web.

In October 2020, WhatsApp was first reported to be working on this feature."We have already announced that WhatsApp was working on Calls. Today we are happy to announce new details, provided from the WhatsApp Web 2.2043.7 update!WhatsApp is considering the idea to offer Voice and Video Calls in the next few weeks, even if the development is in a beta-stage," the report by Wabetainfo read. However, WhatsApp is yet to officially announce the new feature.

Apart from this, WhatsApp is working on a new read later feature, and the traces of which has appeared several times during beta updates. As per Waberainfo, WhatsApp is developing the Read Later feature which is an improved version of Archived chats. "When a chat is added in your archive, the user doesn't receive notifications from it because all archived chats will be automatically muted, in order to reduce interruptions. We already showed the new Read Later cell, added at the top of your chat list. Opening "Read Later" we find a presentation banner that introduces the changes. In this update, even if the feature isn't natively available yet, WhatsApp is improving this section, indicating what's the purpose of Read Later with a persistent message," the report read.