Asian shares dipped as fears over the creeping spread of the disease sent funds fleeing to the sheltered shores of U.S. assets, lifting the dollar to three-year highs 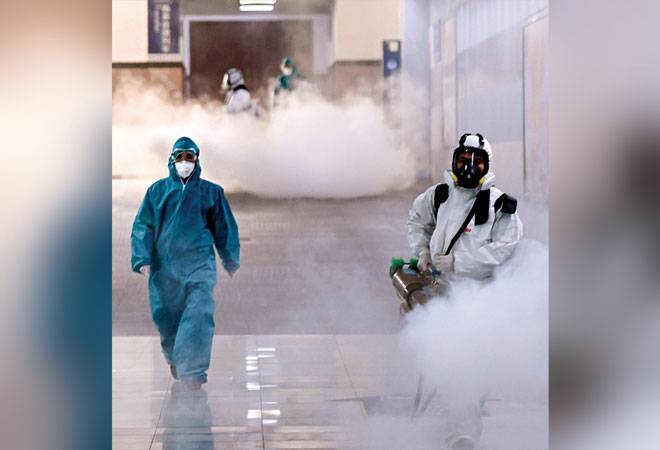 China reported an uptick in new cases of coronavirus on Friday, boosted by more than 200 people testing positive for the disease in two prisons outside of Hubei province, the epicentre of the outbreak.

As international authorities tried to stop the outbreak in China from becoming a global pandemic, finance leaders from the Group of 20 major economies meeting in Saudi Arabia over the weekend were set to discuss risks to the global economy.

China has had more than 75,400 cases of the coronavirus and 2,236 people have died of the disease it causes - known as COVID-19 - most in Hubei province and its capital of Wuhan where the virus emerged in a wildlife market in December.

Asian shares dipped on Friday as fears over the creeping spread of the disease sent funds fleeing to the sheltered shores of U.S. assets, lifting the dollar to three-year highs.

"COVID-19 anxiety has risen to a new level amid concerns of virus outbreaks in Beijing and outside of China," said Rodrigo Catril, a senior FX strategist at NAB.

Japan and Singapore are on the brink of recession and South Korea on Friday said its exports to China slumped in the first 20 days of February, with the outbreak upending global supply chains.

Mainland China had 889 new confirmed cases of coronavirus infections as of Feb. 20, the National Health Commission said, up from 394 cases a day earlier. The death toll rose by 118, with most in Wuhan, which remains under virtual lockdown.

Infections found in two jails, in the northern province of Shandong and the eastern province of Zhejiang, made up most of the 258 newly confirmed cases outside Hubei.

After several days of more encouraging trends in infections, China's Communist Party newspaper warned that it would be a mistake to think victory was in sight.

"If we give in to blind self-confidence, the epidemic could rebound and the virus exploit us when we are off guard," the People's Daily said.

The virus has emerged in some 26 countries and territories outside mainland China where there have been 11 deaths, according to a Reuters tally of official statements.

South Korea reported 52 new confirmed cases of the coronavirus, taking the national total to 156, the majority in Daegu, a city of 2.5 million people, where dozens of people were infected in what authorities described as a "super-spreading event" at a church.

More than 400 members of the church were showing symptoms of the disease, though tests were going on, officials said.

In Hong Kong, which has confirmed 69 cases and two deaths from the disease, dozens of police officers were quarantined after an officer tested positive following a banquet on Tuesday.

Another hot spot has been the Diamond Princess cruise ship held under quarantine in Japan since Feb. 3.

Japan has allowed passengers who test negative to leave the ship and hundreds have done so this week, with hundreds more set to disembark on Friday.

Japan reported the deaths of two elderly passengers on Thursday, the first fatalities from aboard the ship where more than 630 cases account for the biggest cluster of infection outside China.

Amid criticism of the government's handling of onboard quarantine, Japanese Chief Cabinet Secretary Yoshihide Suga said one of passengers who died had developed a fever on Feb. 5 but was not removed from the ship until Feb. 12.

Tokyo said it would cancel or postpone major indoor events for three weeks, Jiji news agency reported, as the city prepares to host the Olympic Games starting in July.

As G20 finance ministers prepared to meet, the IMF said it was too early to tell what impact the virus would have on global growth.

"We are still hoping that the impact will be a V-shaped curve" with a sharp decline in China and sharp rebound after the containment of the virus, IMF Managing Director Kristalina Georgieva said.

"But we are not excluding that it might turn to be a different scenario like a U curve where the impact is somewhat longer."

The earliest vaccine for the coronavirus would be submitted for clinical trials around late April, China's Vice Science and Technology Minister Xu Nanping said.

Fears of the contagion triggered violence in Ukraine, where residents of a town clashed with police, burned tires and hurled projectiles at a convoy of buses carrying evacuees from Hubei to a quarantine centre.

Hundreds of helmeted police and an armoured personnel carrier were sent to keep order.

Amy Deng, who underwent home quarantine with her daughter Daisy, 8, said neighbours had called police over concerns they would spread the disease.

"People were already panicked, then they made up this rumour and spread it, telling us not to even live in the community," said Deng, 45, a Santa Rosa, California, acupuncturist.