The Foreign Direct investment (FDI) has displayed increase in absolute numbers from $45.15 billion in FY15 to $60.97 in FY18 but the rate of growth in FDI inflows is falling consecutively since the last two years. Recoding a growth of just 1.24 per cent in FY18.

Despite Prime Minister Narendra Modi's 'Make in India' campaign and improvement in Ease of Doing Business rankings, the country's foreign direct investment (FDI) growth rate has declined in the past couple of years. The rate of growth of FDI in the country has slowed down since the financial year 2016 when it saw a robust growth of 23.05 per cent, Minister of State for Commerce & Industry C R Chaudhary revealed in the Lok Sabha. 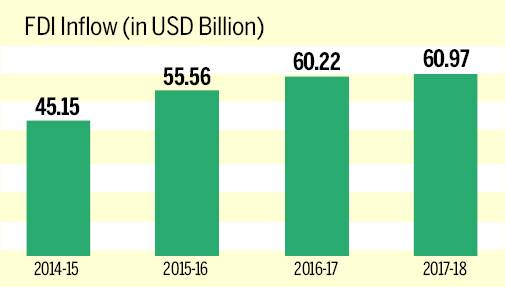 Prime Minister Narendra Modi had launched the 'Make in India' initiative in September 2014 to drive foreign investment in the country and turn India into a global manufacturing hub.

The report also recognised India as one of the top 10 countries which showed improvement in this year's assessment, for the second successive time.