Indian economy, which saw one of the most stringent lockdowns, has shrunk the most amongst major economies on not just quarterly basis but also annualised basis Be it quarterly or annualised rate, India has been the worst performing major economy in the world during April-June 2020

Social media, especially Twitter, is abuzz with the GDP controversy. Many renowned individuals, including top economists, have claimed that the US has witnessed a sharper contraction than India in April-June quarter of 2020. However, this seems to be a case of apples being compared with oranges. Two different sets of data have been mixed up to claim Indian economy is not the worst performer in the June quarter.

But, as per the data available, Indian economy, which saw one of the most stringent lockdowns, has shrunk the most amongst major economies on not just quarterly basis but also annualised basis.

Below is a comparison on both annualised as well as quarterly basis, and where India stands when compared to world's top economies.

But, firstly, let's understand what is annualised rate, and how is it different from a quarterly rate.

What is annualised rate?

Annualised rate is a rate for a period of less than a year. But it is extrapolated as if that rate applies to the full year. In other words, it is an estimated/hypothetic mathematical rate of annual return, not the real rate of fall or growth in GDP. The method may work under normal circumstances when changes in GDP are minor and gradual. However, in circumstances such as these, when GDP has seen a drastic fall, the extrapolation makes the numbers unrealistic-as they appear now.

'Annualised' method of reporting GDP is a method followed by the US, Japan and Canada for ease of comparison of their national accounts. But other countries such as India, Italy, France do not release their GDP in an annualised format. That's the root of the confusion.

So, we decided to find out where do the countries stand against each other if all of them released their GDP at an annualised rate, including India:

Unfortunately, on an annualised basis too, India has recorded the steepest fall when compared to the major economies of the world. In fact, India's GDP fall (in % terms) is more than twice that of the US, contrary to what many on social media claim.

While China which has started to post recovery in the second quarter (Apr-June 2020) would have hypothetically grown by an annualised rate of 54.6% over a year. This is simpler to understand.

The Y-o-Y GDP figures are calculated by comparing the GDP like to like, this year over the previous year. For instance, in April-June 2020 with the same April-June quarter of 2019.

India's economic growth suffered its worst fall on record in the April-June quarter, with the gross domestic product (GDP) contracting 23.9%. The coronavirus-related lockdowns mainly weighed on the already-declining consumer demand and investment. The numbers are the worst since 1996, when India started reporting quarterly data. 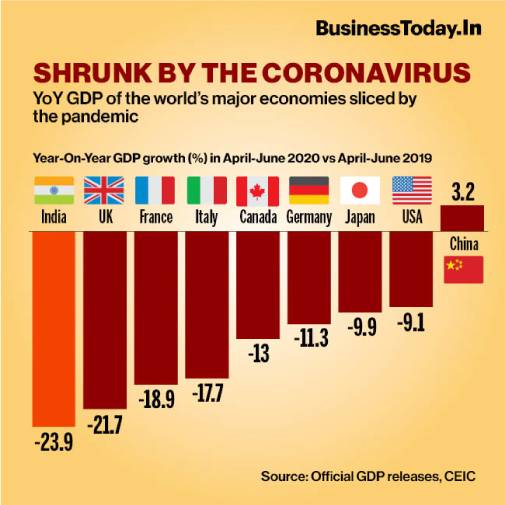 So, to end the debate on social media -- be it quarterly or annualised rate, India has been the worst performing major economy in the world during April-June 2020.