The decline in the month was largely attributed to sectors such as roadways, community services, water supply, real estate and power distribution Project tendering activity in the infrastructure space in December 2019 was down for the fourth consecutive month on year-on-year (y-o-y) basis in the financial year 2019/20. The total value of published tenders worsened yet again compared to the levels seen until November 2019. Tendering activity in the month stood at Rs 57,600 crore, down 36 per cent compared to a moderate decline of 2 per cent in the previous month, on a y-o-y basis. This repeats after a substantial fall of 62 per cent in October after a not-so-extensive decline of 18 per cent. Project tendering (in value terms) has declined consistently for nine straight months, except for the month of August when it was up 4 per cent y-o-y, with April registering the sharpest decline of 64 per cent in FY20.

Although there was some improvement on a month-on-month (m-o-m) basis in December, according to an Emkay Global Financial Services report, when the total value of published tenders grew 22.3 per cent after a significant monthly growth of 50 per cent in November.

Year-to-date (YTD) tender value was thus down 40 per cent y-o-y in FY20, suggesting unfavourable trends for the full-year.

Tendering activity, in number terms, met a similar fate in December, registering the second sharpest fall of 64 per cent, over the past nine months, on a y-o-y basis. Total number of tenders has declined more than 50 per cent (y-o-y) in roughly all the months since the start of this fiscal translating into an average decline of 56 per cent. It too declined m-o-m at 24 per cent in December. 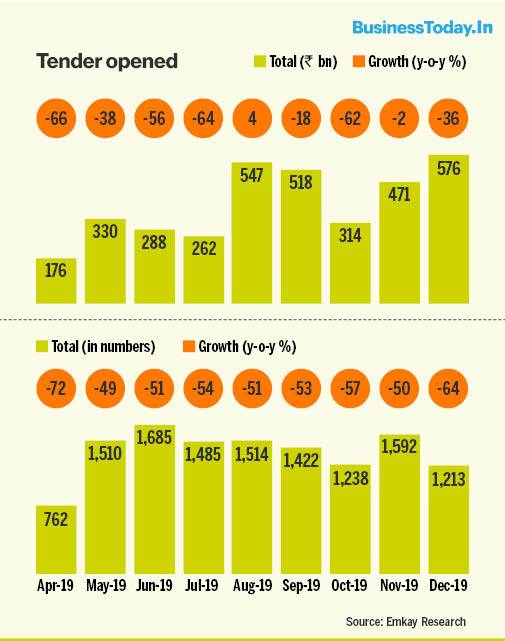 The decline in the month was largely attributed to sectors such as roadways, community services, water supply, real estate and power distribution, adds the report. Tendering activity in these sectors, in value terms, saw a decline of 23 per cent, 75 per cent, 91 per cent, 72 per cent and 78 per cent, y-o-y, respectively. Sectors which reported growth in the tendering activity were irrigation (90 per cent y-o-y), railways (123 per cent y-o-y) and hospitals (163 per cent y-o-y). Cumulatively, the tendering activity saw a decline in FY20 on a year-to-date basis mainly due to fall in major sectors such as roadways, community services, real estate, power distribution and water supply. Railways is the only large sector to have reported reasonable growth of 16 per cent on YTD basis. 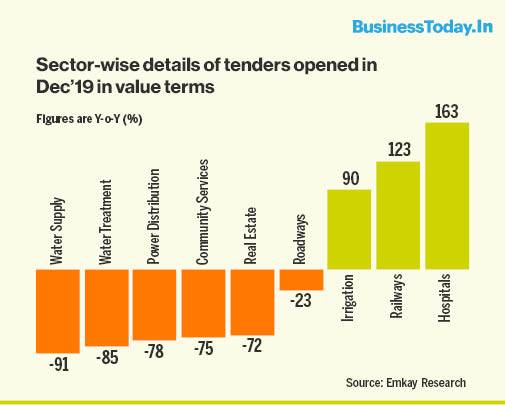 Key tenders published during the month were the execution of ISP-Kalisindh Phase-II micro lift irrigation scheme for irrigation in Madhya Pradesh, planning, design and construction of Ganga water lift project for drinking water (Phase-I) in Bihar and the construction of tunnels bridges and formation works under package-1 in connection with a new single line broad gauge rail link between Rishikesh and Karanprayag.