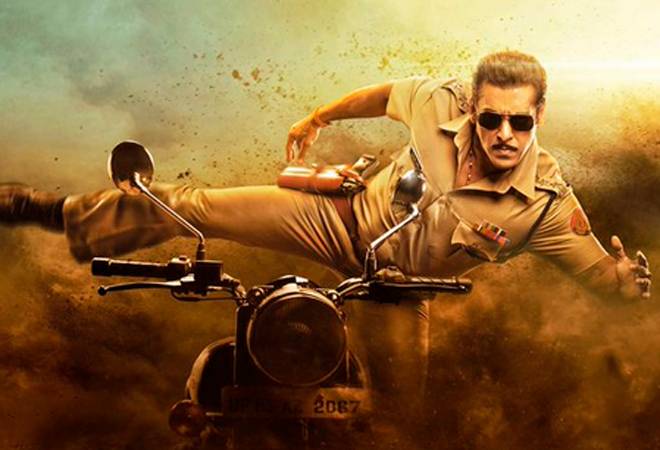 Salman Khan's latest movie, Dabangg 3, seems to have failed to impress critics but it'll unlikely affect the film's business. While many critics termed Dabangg 3's screenplay underwhelming, others say it's a film made for masses, especially Salman's diehard fans. As per expectations, Dabangg 3 is eying an impressive start with over Rs 22-24 crore collection on Day 1, say early estimates.

Though film trade analysts were expecting much higher opening day collection, protests over the Citizenship Amendment Act across major cities of India and not-so-impressive reviews have dampened its overall earning to some extent. As per Box Office India, Dabangg 3 had a decent chance of raking in Rs 25 crore till around 4 pm on Friday, but its post-5 pm collections dropped as theatres across several states closed early.

Taran Adarsh, the film trade expert, said Dabangg 3 is an out-and-out a 'Salman show'. Sumit Kadel, film trade analyst, also said that Salman is the "only saving grace" in the film. "Some films are experiences, and therefore, shouldn't be restricted with star ratings, or discussions about the film's merit. A Salman Khan film, in this context, is a rollercoaster ride," writes Nairita Mukherjee in India Today's review of the film.

#OneWordReview...#Dabangg3: ENTERTAINING.
Rating: ⭐️⭐️⭐️½#ChulbulPandey is back with a bang... #Dabangg3 is an out-and-out #Salman show... #PrabhuDheva focusses on mass and masala... Interval block and climax fight terrific... #KichchaSudeepa excellent. #Dabangg3Reviewpic.twitter.com/idpr1qiuZD

#Dabangg3 is struggling at the box office on its Day-1 -Friday collection looks in the range of ₹ 18-20 cr nett. All eyes on night & late night shows.

The much-loved franchise has received overwhelming responses for its previous movies as well. For those who plan to watch the film, Dabangg 3 is a masala entertainer complete with drama, tragedy, action, comedy and some big names in the billing.

Dabangg 3's overall Day 1 collection, however, is expected to be lesser than Bharat, which had a mega opening at Rs 42 crore. But, Salman Khan's fandom would try to ensure Dabangg 3 also goes on to become another major hit. The movie has also been dubbed in Kannada, Tamil and Telugu and has been released across 3,000 screens.

Additionally, the movie also features Kichcha Sudeep in a significant role. Sudeep has a massive fan following in the Southern states and Dabangg 3 would cash in on that heavily. Dabangg 3 also features Sonakshi Sinha and debutante Saiee Manjrekar along with Arbaaz Khan, Amole Gupte, Mahie Gill, Pankaj Tripathi, Mahesh Manjrekar, Milind Gunaji and Tinnu Anand. Prabhu Deva and Preity Zinta have special appearances in the movie.