Darbar box office prediction: Reportedly made on a budget of Rs 200 crore, Darbar is likely to open well because it is a solo Pongal release 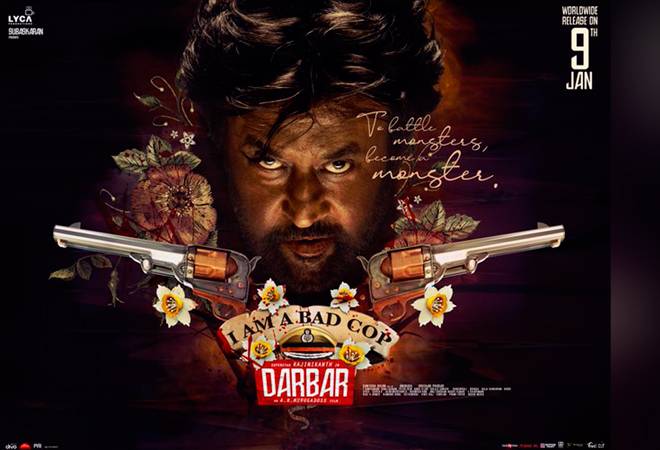 Darbar box office prediction: The censor board officials have issued U/A certificate to the film. Darbar is Rajinikanth's fourth film to get U/A certificate after Kaala, 2.0 and Petta

Darbar box office prediction: Superstar Rajinikanth is back with his latest film 'Darbar'. The film is directed by AR Murugadoss and is bankrolled by Lyca Productions. Darbar is a cop drama in which Rajinikanth portrays two roles -- of a cop named Aaditya Arunasalam and another of a social activist. The film also stars  Nayanthara, Suniel Shetty, Nivetha Thomas, Prateik Babbar and Nawab Shah among others.

Reportedly made on a budget of Rs 200 crore, Darbar is likely to open well because it is a solo Pongal release. Last year, Rajinikanth's Petta also released during Pongal and minted around Rs 250 crore worldwide. In fact, Petta crossed the Rs 100 crore mark in mere 11 days.

The censor board officials have issued U/A certificate to the film. Darbar is Rajinikanth's fourth film to get U/A certificate after Kaala, 2.0 and Petta. The film's run time is 2 hours and 39 minutes.

Fans of Rajinikanth have swarmed to the theaters for the 4 am shows of Darbar in Chennai  today.  Film analyst Ramesh Bala also took to Twitter and said, "Darbar 1st Half : A Mad Police commissioner cleans up Mumbai city crime syndicates in his own unique way...Pre-interval block is intelligently executed". Bala also  appreciated Rajinikanth's swag and action scenes and wrote, "#Thalaivar looks very young and his swag/mass screen presence is the no.1 highlight and Nivetha Thomas also does well". Bala has given three out of five ratings to Darbar.

Watch it for #Thalaivar

#Darbar [3/5] : A feast for #Thalaivar fans.. #Superstar@rajinikanth swag and acting is a treat to watch.. @i_nivethathomas has done well..

Rajinikanth's Darbar is clashing with Deepika Padukone's Chhapaak, as well as with Ajay Devgn and Kajol-starrer Tanhaji: The Unsung Warrior. It must be noted that after 2.0, none of Rajinikanth's movies have performed well in the Hindi belt.

Further, Darbar would be clashing with two Telugu entertainers this week only. However, Rajini's movie will have an edge over the two, as Sarileru Neekevvaru and Ala Vaikunthapurramuloo are releasing on Saturday and Sunday respectively. Next week, Darbar will clash with  Dhanush's Pattas.

Tamil Nadu's Home (Cinema) Department has permitted five special screenings of Rajnikanth's Darbar for four days from its release, apart from the weekend. The Tamil Nadu audience can enjoy special shows on January 9, 10, 13 and 14 of Darbar. However, unauthorised 4.00 am shows during releases of a film with a big star has been a regular trend in Tamil cinema.