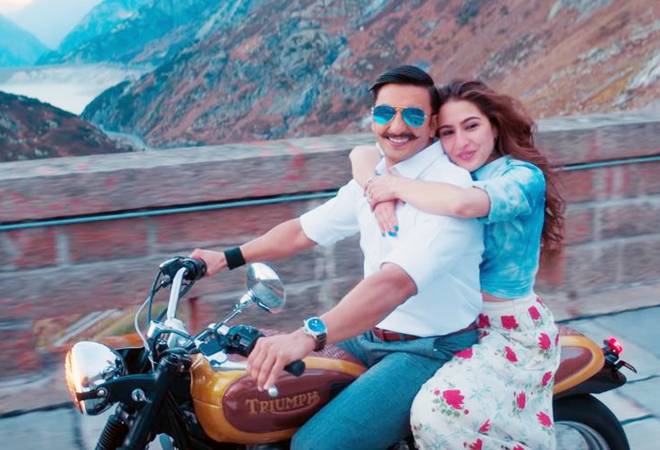 Simmba Movie box office collection: The year 2018 has really good for Bollywood actor Ranveer Singh, both professionally and personally. Apart from giving blockbusters like Padmaavat, he also tied the knot with actor Deepika Padukone at a lavish wedding ceremony at Lake Como in Italy. Now icing on the cake is Ranveer Singh-Sara Ali Khan's new film Simmba, which seems to have ruled the box office collection in its first weekend. The film has crossed Rs 50-crore mark at the worldwide box office collection so far. Rohit Shetty's movie has managed to earn over Rs 68 crore in the first two days. The film has grossed Rs 44.05 crore in the domestic market and Rs 24.22 crore in the overseas market.

On Friday and Saturday, Simmba raked in over Rs 20.72 crore and Rs 23.33 crore, respectively at the domestic box office collection. Ranveer Singh's Simmba made the box office collection of $372,000 and $520,000 on Thursday and Friday, respectively, in UAE and Gulf Cooperation Council. Ranveer's film added $488,000 in its Friday collection in the USA and Canada,  $144,000 in Australia and Fiji and $87,000 in the United Kingdom. However, Simmba showed a marginal decline on Saturday and only managed to collect around Rs 11 crore at the international box office.

Simmba, released on December 28, is Sara Ali Khan's second movie after Kedarnath. The film is an official remake of the 2015 Telugu hit Temper. The movie revolves around a dishonest cop, Sangram Bhalerao, played by Ranveer, who falls in love with Shagun, played by Sara Ali Khan, who works as a caterer near his police station. Sangram's life is turned upside down when a 19-year-old student, who he considers as his sister, gets brutally raped and killed.