Mission Mangal Review: Akshay Kumar looms around in Vidya Balan's shadow. She is delightful and is the star of the show. 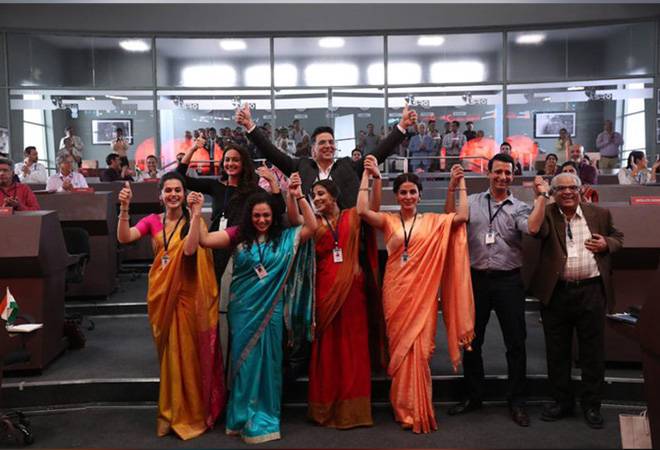 Mission Mangal Review: Vidya Balan is the star of the show

Mission Mangal Review: The first thing that will strike you as a viewer is that for a film about a space mission, Mission Mangal does not have a lot of science. One could argue that the film seeks to cater to a large audience, many of who might not understand the intricacies of rocket science but then one could also argue that the makers are spoon-feeding the audience and challenging their intelligence. After all, would the Project Director of a space mission be making puris in the conference room to explain how to land on Mars to her equally-qualified peers?

In fact Vidya Balan's Tara Shinde ends up explaining the mission thrice -- once to Akshay Kumar's Rakesh Dhawan who thankfully doesn't require fried puris to understand, then another time to a room full of ISRO scientists who probably misunderstood everything at the sight of puris, and the third time to her son with the help of a yo-yo. This will make you wonder why schools never explained science like this to you.

The movie starts with the failure to launch GSLV Fatboy, something Akshay Kumar's Dhawan bravely takes the blame for even though the fault is not his. Another thing that seems rather out of place is how some of the brightest minds at ISRO have zero scientific temperament -- obviously except for Shinde and Dhawan. They have to show them the way otherwise they are just a bunch of washed-out government employees.

Then in comes a bunch of misfits, who started their careers as scientists because of their passion but gradually just got stuck in a 9-5 job at ISRO. They are bundled off to the "Mars Department" that is planning a mission to Mars sometime in the unforeseeable future. Little do the authorities know that what they sidelined as a useless bunch are some of the most crackling minds of Indian space research.

Mission Mangal is replete with cliches but it is enjoyable. Akshay Kumar looms around in Vidya Balan's shadow. She is delightful and is the star of the show. However, her Tara Shinde is a replica of Sulu from Tumhari Sulu, except with more qualification. In fact, Shinde and Sulu's personal lives could be swapped and one would not be able to tell them apart.

Akshay Kumar's Rakesh Dhawan is apparently a "crazy scientist" but does not have much science to add throughout. All the science comes from Balan and her bunch of ladies that include Sonakshi Sinha's who's Eka Gandhi the tough cookie of the gang, Taapsee Pannu's mild-mannered Kritika Aggarwal, Kirti Kulhari's tormented and unhappy Neha Siddiqui and Nithya Menen's Varsha Pillai, who is struggling to become a mother.

While the film revolves around the brilliant group of women, there must be mention of the men too. Sharman Joshi is in character as the God-fearing -- or rather Mangal-fearing -- Parmeshwar Naidu and HG Dattatreya as Ananth Iyer also lend their capable hands to the mission. There's Sanjay Kapoor and Mohammed Zeeshan Ayyub as well.

The problem with Akshay Kumar's Dhawan is that although the makers intended him to stay in the background, Kumar's larger-than-life avatar does not quite allow it. Such is the need to show him in a superior light that the makers credited his character for the Time of India cartoon that the daily had published as a reply to New York Times' cartoon. The NYT cartoon mocked India's attempt to reach space. Either Kumar takes the limelight or it just looks like he 'allows' the women to take the credit. So, while there is talk of equality, the gestures remain just that -- gestures.

Mission Mangal's last fifteen minutes where our beloved VFX-satellite is en route to Mars has more drama than Kumar's multiple impassioned speeches. Mission Mangal is not a perfect film -- in fact, it has multiple flaws. Nevertheless, it is an enjoyable ride to Mars.