A local officer said that using slingshots to scare the primates away has also been futile. Locals are now afraid to leave their homes fearing attack by the macaque monkeys 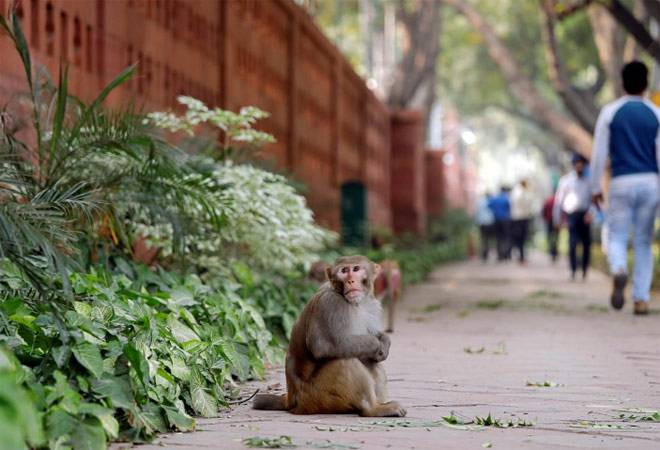 Police in Thailand have admitted that the situation is out of control in the city of Lopburi that has seen a population explosion of macaque monkeys. The population of monkeys have increased at an unprecedented rate and they are also eating themselves to death.

Locals are terrified of the macaques that have based themselves at an abandoned cinema hall, stated a report in The Sun. Residents of the city have barricaded themselves inside their homes as the monkeys roam free.The police have said that trying to disperse large groups of macaques was "hopeless".

A local officer said that using slingshots to scare the primates away has also been futile. Locals are now afraid to leave their homes fearing attack by the macaque monkeys.

The cinema hall where they have based themselves also have the remains of the dead primates. Any human who has attempted to enter is being reportedly attacked.

The lack of tourists have also made the primates rampage the city in search for food. The population of macaques is estimated to be around 6,000. Some media reports have pegged this number at as high as 8,400. Locals have tried to feed junk food to the macaques to calm them down but the situation has reportedly worsened as they have taken a liking to the sugary diet.

Due to their junk diet the urban monkeys have less muscle mass than their wild counterparts. Not only that, many also suffer from blood disease and hypertension.

Narongporn Doodduem, Director of a regional office of the Wildlife Conservation Department, said: "The monkeys are never hungry, just like children who eat too much KFC." In the pre-COVID times, the monkeys actually attracted tourists who would buy food to feed them.

According to the news site, parts of the city are now no-go zones. Thai authorities have also tried sterilising some of the monkeys but that has not helped them. Wildlife authorities are planning to make a sanctuary for them.