Recent events involving DoT have sparked debate over its overbearing methods of handling the telecom sector and, in a way destroying it rather than promoting it A recent affidavit filed in the Supreme Court says DoT is spreading fear far and wide, and weakening the sector to a point where there will be just two players in the market

The Department of Telecommunications (DoT) is creating fresh trouble for telecom operators. Recent events involving DoT have sparked debate over its overbearing methods of handling the sector and, in a way destroying it rather than promoting it. Be it DoT's top decision-making arm - Digital Communications Commission (DCC) - upholding the Rs 3,050-crore penalty on Bharti Airtel and Vodafone Idea or the recent affidavit filed in the Supreme Court, DoT is spreading fear far and wide, and weakening the sector to a point where there will be just two players in the market.

The most recent blow has come from the filing in the apex court last week where DoT asked telcos to pay up Rs 92,641 crore on account of license fees and spectrum usage charges (SUC). It's a 16-year-old dispute between DoT and telcos over the definition of AGR (adjusted gross revenues) - based on which license fees and SUC charges are calculated. DoT argues that a wider number of items - interest income, dividend, profits on the sale of assets, insurance claim and forex gain - should be included as components of AGR. Telcos, for obvious reasons, don't agree. 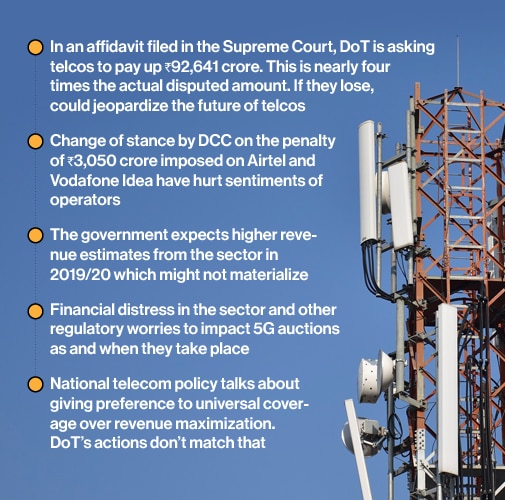 The fuss over defining AGR has dragged on long enough that the actual dispute amount is now a small proportion (25 per cent) of the total dues that the DoT is asking for. The Rs 92,641 crore includes Rs 23,189 crore as the disputed amount, Rs 41,650 crore of the levy of interest, Rs 10,923 crore as penalty, and Rs 16,878 crore as interest on penalty. Just about three years ago, the total dues were just Rs 29,474 crore.

It seems unfair why DoT wants to earn revenues on transactions that do not come under its ambit. For instance, if Airtel buys a commercial property and sells it for a premium, it doesn't seem right that DoT wants to take a share from it - even if the licenses given to telcos contain clauses that include sharing non-telecom revenues with the department.

Both TRAI and TDSAT (Telecom Disputes Settlement and Appellate Tribunal) have supported the telcos' on this issue, but DoT has stuck to its own position. For instance, TRAI excluded non-telecom revenue from AGR definition in 2015 but DoT challenged its recommendations.

Telcos claim that they have already paid 85 per cent of the demand raised by DoT. Despite getting positive judgement from high courts and even the Supreme Court in their favour, telcos have not been able to convince DoT to waive off these charges. "Telecom is in deep financial distress and any penalty imposed will prove to be catastrophic. Operators like RCom, Aircel, Telenor and Tata Teleservices have already shut shop, and recovery of dues from them is impossible," says a sector expert.

Though the SC judgement is pending, the industry sources say that DoT has a stronger case than telcos. According to a July report by IIFL Securities, "the AGR case is in the final stages of hearing and that the possibility of an adverse verdict for telcos cannot be completely ruled out."

The other big dispute is over the penalty imposed on incumbents Airtel and Vodafone Idea for not giving enough interconnect points to newcomer Reliance Jio in 2016 when it had commercially launched services. The lack of interconnect points led to huge call drops on the Jio network. TRAI got furious and slapped fines. The matter went the DCC (formerly Telecom Commission) which asked TRAI to revise the quantum of fine taking into consideration the financial health of the sector, but TRAI didn't budge. In the second last week of July, five DCC members reportedly ruled in favour of TRAI, and just two differed, thereby giving its approval to the TRAI's penalty on Airtel and Vodafone.

"It's beyond doubt that despite having the complete understanding, DCC has decided to put telcos in a precarious situation. What kind of support one can expect from DoT in the future?," says an executive with telecom company.

However, the Centre is gung-ho on revenue collection. It expects a 28 per cent jump in revenues (non-auction) from telecom at Rs 50,519.8 crore in 2019/20. But this seems far-fetched if historic data is to be believed. For instance, telcos contributed Rs 14,260 crore in 2017/18, and Rs 18,400 crore in 2016/17 to the government. These are payments for license fee (at 8 per cent) and SUC (about 6 per cent) charges - the two major sources of revenue apart from GST which is charged at 18 per cent. The government's revenues from the sector have dipped in the recent years primarily on account of the price war, led by Jio, that has affected the topline and bottomline of incumbent telcos over the past three years.

The stance of DoT is akin to a farmer who killed the golden goose. In order to extract maximum revenues, the DoT is making telcos so feeble that they are not in a position to generate enough revenues to share with the exchequer. The other major source of revenue is the spectrum auction which the minister Ravi Shankar Prasad says will happen in December but the proceeds from the auctions have not been factored in the 2019/20 budget estimates.

Without the financial muscle, it's widely believed that telcos will most likely give a miss to the already-overpriced 5G spectrum auctions which will further hurt a major source of revenues for the government. TRAI has recommended auction of about 8,644 megahertz (MHz) of radio frequencies for sale at an estimated total base price of Rs 4.93 lakh crore. The reserve prices for spectrum in India are highest in the world at $70 million per MHz as compared to $26 million in Italy, $18 million in South Korea and $10 million in the UK, as per brokerage firm CLSA.

"The Indian telecom industry continues to face headwinds in terms of revenue generation and profitability, although a slow recovery is on the anvil. Tepid cash-flow generation against elevated debt levels have been a concern for the industry and recent fund raising by the telcos have assuaged these only temporarily... 5G spectrum auctions along with the network capex required for 5G will likely exert further pressure... and has the potential to disrupt the recovery process. Lack of established content, use cases, and uncertainty around the capability of subscribers to pay a premium for such services strengthens the case for telcos to avoid aggressive participation in 5G auctions," ratings agency ICRA said in a July note.

It's time that the DoT takes a step back and look at what it is trying to achieve. While there's a general sense of caution among bureaucrats to take decisions that are in the best interest of the government - and more importantly, decisions that should not land them into legal troubles a few years after the retirement. But this mindset is not serving the essential purpose of the government - to support industries with minimum regulatory interference.

If only DoT can read the preamble of its own National Digital Communications Policy 2018, over half of the problems of the telecom sector can be sorted. "This policy aims for universal coverage rather than revenue maximization," the policy statement says. The steps of the DoT over the years seem to contradict this claim.