The fact that Modi wanted Santosh Gangwar to continue in the labour and employment ministry only proves the importance the government attaches to his 'reform agenda'.

Immediately after assuming the office of labour minister for a second time, Santosh Gangwar had promised to complete the labour reform agenda.
Joe C Mathew

Santosh Kumar Gangwar, Labour Minister in the second prime minister Narendra Modi-led National Democratic Alliance (NDA) government has absolute clarity on the priorities of his ministry. "We will try to complete the labour reform agenda," said Gangwar immediately after assuming office on May 31.

Unlike several other ministers in the Modi 2.0 Cabinet, Gangwar is not new to his portfolio. He had been steering the 'labour reform agenda' since 2017 as minister of Labour and Employment (independent charge) in the previous Modi government too. The fact that Modi wanted Gangwar to continue in the same ministry only proves the importance the government attaches to this 'reform agenda'. The 'labour reform' plan is in line with recommendations of Second National Commission on Labour, which called for amalgamation, simplificaiton and rationalisation of existing laws by formulating four umbrella Labour Codes on (i) wages; (ii) industrial relations; (iii) social security & welfare; and (iv) occupational safety, health and working conditions.

Labour ministry has been working on an ambitious task of amalgamating, simplifying and rationalising 44 Central laws by incorporating relevant portions of all these laws into four Labour Codes for some time now. The first Code talks about minimum wages for every worker, unorganised, and contract labourers in the organised sector. The second one on industrial relations aims at changing the rules binding labour unions, handling labour disputes, terms of employment, lay off, retrenchment policies etc. The third, social security and welfare expands the scope of the coverage of Employees State Insurance (ESI) to every worker, irrespective of the size of the firm. The last one prescribes occupational safety, health and work conditions for Indian labour.

"The Labour Codes, one of which (on wages) is already in the post-consultation stage, are historical as it aims to bring the entire unorganised labour, upto the last person into its fold", says C K Saji Narayanan, national president, Bharatiya Mazdoor Sangh (BMS).

In other words, Narayanan is appreciating not only the structure of the Code, but its scope. "At the moment only 7 per cent of workers are covered under the Minimum Wages Act. Once the new Wage Code gets enacted, every worker, up to the last person will have the right to wages. It is going to benefit the unorganised sector the most, as the Code will cover almost 43 crore people in the unorganised sector alone," he says. The Social Security Code also aims at expanding benefits like ESI (Employee State Insurance) to 43 crore additional workers.

As India's largest Labour Union and as an affiliate organisation of the ruling party BJP's ideological mentor Rashtriya Swayamsevak Sangh (RSS), BMS has been one of the strong votaries of this change.

In fact, the Code on Wages Bill, 2017, which replaces existing laws like the Payment of Wages Act, 1936, the Minimum Wages Act, 1948, the Payment of Bonus Act, 1965, and the Equal Remuneration Act, 1976, was introduced in Lok Sabha on August 2017. It was scrutinised by the Parliamentary Standing Committee on Labour also. The Modi 2.0 government is expected to enact this Bill in the first 100 days itself as it will have an impact on India's total workforce - formal, informal and contractual employees alike.

The other three Codes are still in the consultation stages, though the government had made considerable progress in the case of the Code on Social Security & Welfare. It had prepared a draft Code on Social Security and Welfare, 2018 and Gangwar had chaired a Tripartite consultation with central trade union organisations, the employer' associations and the state governments/UTs on the matter during his previous tenure. The draft note for the Cabinet along with the Labour Code on Social Security & Welfare Bill, 2018 was also circulated for inter-ministerial consultation, though the Bill is far from final. "The consultation process of the Social Security Code is yet to be over. The major objection we have here is that the draft proposes to mix up the well functioning ESI and PF (Provident Fund) with the proposed scheme for social security coverage to the unorganised sector," Narayanan says. According to him, the move to bring all the funds, the proposed one and the existing ones under one umbrella will be counterproductive as it can impact the well functioning schemes too. "The problem is that the  entire ESI and PF funds, if merged (with the schemes for the unorganised sector which has no such corpus or funds at the moment) and cross subsidised will see the ESI and PF funds get utilised in no time. So ESI and PF funds should not be used to subsidise the unorganised sector. The current structure of these organisations and their funds should remain separate from the Social Security Code," he explains. BMS wants the issues to be sorted out at the earliest and the Code passed in the Parliament.

ALSO READ: BT Buzz: What Modi 2.0 could mean for the Indian pharma industry?

The other two Codes are also in the consultation stage. Gangwar had chaired Tripartite consultation on a preliminary draft of the Code on Occupational Safety Health & Working Conditions in November last year. Around the same time, the Labour Ministry had sent the Labour Code on Industrial Relations Bill, 2018 to Cabinet Secretariat, though it did not clear the Legislative scrutiny.

Narayanan said BMS is objecting to several clauses of these drafts as they are mostly "cut and paste of existing laws". "That is not enough. We need to make it pro-labour and then present it. We have raised our objections and it is in a re-drafting stage," he points out.

Issues around on contract labour, which includes the concept of fixed term employment and universal pension for labour are also being discussed at the government level. However, the priority of Gangwar is going to be the four Codes.

Incidentally, Niti Aayog has a chapter on Strategy on employment and labour reforms in its 2022 vision document released towards the end of 2018.  It talks about labour welfare, indicating that the government, while being pro-industry, is also trying to balance its pro-labour image. "For the first time in 28 years of (India's) globalisation, there is a document that brings labour welfare at the centre of labour reforms. This shows that there is a policy change in favour of labour welfare. That should continue," Narayanan says.

In the last 18 months, Gangwar has been silently bringing about lot of pro-labour changes. The bonus and gratuity got doubled during this period, the salary of anganwadi ASHA workers was doubled, minimum wages in central government increased to Rs 350 a day for unskilled workers, and many more.

Given Modi government's resolve to bring changes to lives of the masses, labour reforms are sure to continue.  "We are very positive," says Narayanan. 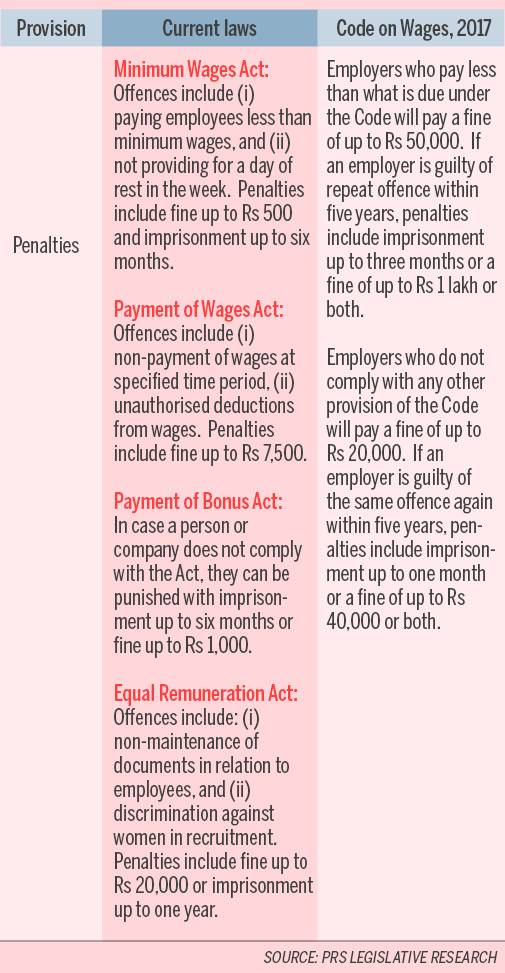