The great branding campaign that made PM Modi the winner

In order to create the right kind of buzz for the brand, a marketer needs to hammer his brand message across media and Modi did just that. Crafting an election campaign doesn't seem to be any different from crafting a marketing campaign for a brand. And, Prime Minister Narendra Modi, can give celebrity marketers of India a run for their money. A successful brand not just has to be a good product but it also needs to get the consumers to believe that it is the best and that it has a purpose and more importantly it listens to the consumer's needs. It also needs a convincing enough face to endorse the brand. PM Modi, brand gurus say, built his political campaign on the very same tenets of a strong promise and strong leadership, the result of which has been an overwhelming victory in the Lok Sabha elections.

The 2019 election campaign could well be a marketing guide book for marketers and brand experts. The biggest take away for marketers is to build a brand campaign on the basis of one's strength, focus on the intangibles and not so much on the tangibles. We all know that the economy during the Modi Government has been in shambles. There is an all-time high rate of unemployment, a liquidity crisis and a consumption slowdown. The electorate nevertheless voted Modi back with a thumping majority. "He avoided talking about the economy, he went on to talk about uniting India, and he talked about how he would aggressively encounter Pakistan. This made people feel that there is a strong leader who is standing up for them," points out Prathap Suthan, Chief Creative Officer, Bang In The Middle. Suthan in his earlier avatar as National Creative Director of Grey was the brain behind the Atal Bihari Vajpayee government's 'India Shining' campaign. Suthan compares PM Modi's election marketing strategy with Nike's 'Just Do It' campaign. "Nike always appeals to the inner athlete in you; it never makes you feel that you are not an Olympic champion. Modi likewise celebrated Indian-ness, which struck a chord with the average Indian."

The narrative of patriotism has indeed cut across masses, agrees independent political strategist, Anup Sharma. "Modi clearly benefited from a weak product offered by the competition. He convinced the masses that he was the only alternative. If you look at it from marketing parlance, a marketer also needs to convince his target audience that his product is the best." 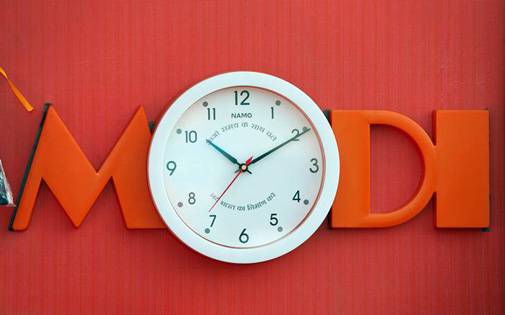 In order to create the right kind of buzz for the brand, a marketer needs to hammer his brand message across media and Modi did just that. Apart from the conventional TV, print and radio, the BJP was all over on social media. "The BJP cadre continuously talked about their election strategies even on their respective school and college alumni groups on WhatsApp, the various communities they were part of, on Facebook as well as on Twitter. You may not have seen BJP ads on social media, but they were all over. It was a concerted 360-degree marketing approach," points out Pankaj Mudholkar, MD, Aakriti Promotions & Media.

Modi, who is known to have personally supervised the 'Main Bhi Chowkidar' campaign, responded to the 'Chowkidar Chor Hai' slogan lashed out by the opposition within hours. With hours, millions added the prefix 'Chowkidar' to their Twitter handles. "Congress had not even decided on its advertising agency even a month before the election. BJP, on the contrary, has been in election mode for the last five years and was extremely focused all through," points out a senior political commentator.

The opposition's 'Chowkidar Chor Hai' rhetoric completely failed. "They focused on bringing down the PM and that backfired. They talked about 'Nyay', but I am not sure the beneficiaries heard it. There was no amplification of the message," adds Suthan of Bang In The Middle. Modi had been severely criticised for launching promotional channels such as Namo TV and his biopic on Eros Now, which deviated the Election Commission norms. He also did an interview with actor Akshay Kumar, where he talked him as a person. Though the EC had ordered the withdrawal of Namo TV and his biopic, it certainly created the desired chatter and made an impact on the people it was meant for.

In fact M.G. Parameswaran, Founder of brand advisory, Brand-Building.com, says that the BJP played a great game of chess with the opposition. "The Congress did talk about creating jobs and about agriculture, but the BJP successfully diverted its attention and the Congress ended up answering questions to incidents such as INS Virat, which happened decades ago." Distribution plays a huge role in building a successful brand and apart from that, a marketer also needs to listen to the people. Carpet bombing a product across markets doesn't work, creating variants for individual markets, suiting the needs of the consumers always works better. Modi, marketing gurus say, did a far better job of connecting emotionally with the voters than Congress President, Rahul Gandhi. In the last couple of weeks of election campaigning, Modi is known to have done as many as 135 rallies while Gandhi did 102 rallies. "Modi and the BJP always had their ears to the ground and have shown all marketing gurus how marketing should be done," says Shashi Sinha, CEO, IPG Mediabrands.