Twitteratis have been calling the ad 'endearing' and 'heartwarming'. At the time of filing the story, as per company's data, the ad had got 42,536,511 impressions and 10, 350,335 views on Facebook (including Instagram) and YouTube on its brand page itself 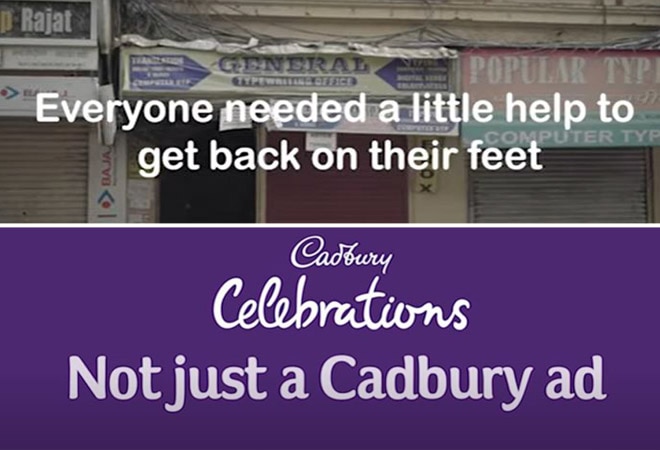 The ad revolves around the family setting where a middle-aged women buys Diwali gifts for her two children, domestic help and husband from different retailers (whose names along with pincodes come up on screen). The presents are loved and appreciated by the family members. When it comes to the 'mummy's gift', the husband offers her the 'sweetest gift', the Cadbury Celebrations pack.

The differentiation of the ad lies in Cadbury mapping out 1,800-plus local retailers, across 260 pin codes to give them the geo-targeted visibility among consumers. This essentially means that the consumers across locations see the retailers nearby their area. For instance, the pincodes and shop names will be different for a consumer in Mahalakshmi in Mumbai than the one who resides in Powai. The ad says, "When all of us support our local stores, all of us can have a happy Diwali."

"The campaign is an extension of the brand's proposition of "Kuch aacha ho jaye, kuch meetha ho jaye' that we started in 2018 to celebrate generosity of people," says Anil Viswanathan, Senior Director, Marketing (chocolates), Insights and Analytics, Mondelez India.

He says, "Diwali is a big time for every business across the board but the news we were getting was of slowdown and empty shops, especially for small business owners. So, the idea was to show brand's generosity by building awareness for local retailers."

The ad has been receiving a lot of eyeballs and love from the netizens. Twitteratis have been calling the ad 'endearing' and 'heartwarming'. At the time of filing the story, as per company's data, the ad had got 42,536,511 impressions and 10, 350,335 views on Facebook (including Instagram) and YouTube on its brand page itself.

"The brilliance of the ad lies in the way it combines data with emotion. Beyond that the storytelling is quite straight forward, one might even miss out on the subtleties which with other retailers are embedded in the ad," says Siddharth Deshmukh, Senior Advisor and Adjunct Professor, MICA.

The concept of using pin codes of the retailers in the familial setting evokes old world nostalgia related to one's personal identity and stirs up memories of the time spent in those bazaars or markets, he says.

For RP Singh, Chief Curator, Content Marketing Summit, it is the ad's context of Covid and Diwali which makes it a winner. He says, "There are two contexts surrounding all of us, one is corona that we want to forget and another is Diwali that we want to embrace and celebrate. The rendition tackles all these issues of coming together to celebrate and help each other by using Diwali as a connector."

Social media and brand commentator Santosh Desai says that in using pincodes and promoting its ecosystem partners the campaign moves beyond advertising. "They are using technology to localise the ad in a very meaningful way. In doing so, the ad accomplishes what it intends to do. A lot of brands have tried to promote their ecosystem partners but it usually ends up being a symbolic action rather than being real," says Desai.

He adds, the whole act of showing that there is a larger perspective, that the brand is not thinking of itself but of the larger community, is what makes the initiative powerful.

In promoting local retails, the brand is demonstrating the concept of reciprocal altruism where it believes that by promoting other retailers, it will gain brownie points with the local shops in general who will then recommend its products to the consumers, says Deshmukh.

From a technology perspective, says Prashant Puri, CEO, Adlift,  the ad is not something new. Showing personalised ad with hyper-geo targetting has been going on for the last 4-5 years where different ads are served to consumers on the basis of their demographics, professions. "What is different here is the scale at which it happened," says Puri.

The brand had to approach stores at each pin code, get their approval followed by the legal consent. "It took us 2-3 months from ideation to execution," says Viswanathan of Mondelez India.