Flipkart Big Billion Days 2020 sale: Flipkart is offering a slew of discounts on Vivo, Samsung, Apple, Redmi, Motorala, Poco, and Realme phones. Laptops, headphones and speakers are up for grabs too 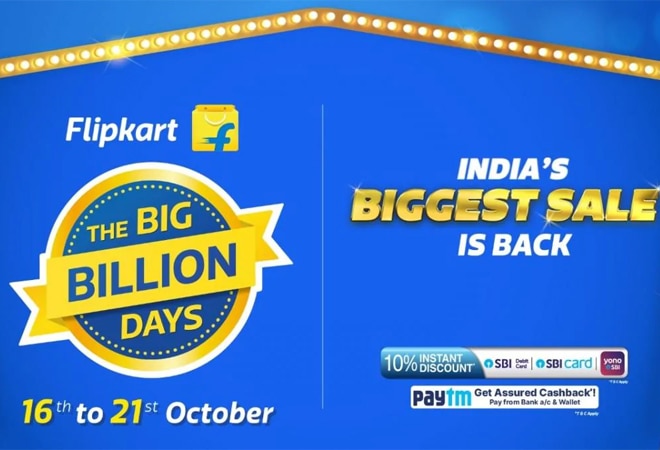 Flipkart is offering its customers cashback, no-cost EMI options, and much more during its Big Billion Days 2020 sale

Flipkart Big Billion Days 2020 sale officially kicked off at 12 pm on Thursday, October 16. The sale, with myriad offers on mobile phones, laptops, speakers, TVs, headphones, and other electronics, is live and will continue for five more days until October 21.

However, the festive season sale began a day early for Flipkart Plus members on October 15. Flipkart has collaborated with the State Bank of India (SBI) to offer a 10 per cent discount to the bank's debit and credit card users, and Paytm users will also receive cashback rewards during the sale.

Here's a look at some of the best offers and deals you can grab on the Flipkart Big Billion Days sale.

Flipkart is offering a slew of discounts on Vivo, Samsung, Redmi, Motorala, Poco, and Realme phones. E7 Plus which was launched in September for Rs 9,499 will available on the e-commerce site for Rs 8,999 during the sale.

Motorola is retailing its newly launched phones E7 Plus and G9 at great discounts. The G9 with Snapdragon 662 chipset and a 48 MP triple camera is available at Rs 9,999.

Samsung has partnered with the e-tailer to launch Galaxy F series smartphones in India as the Korean tech giant looks to further strengthen its position in the online retail segment.

LG G8X dual screen phone is being sold at 71 per cent discount bringing the device's price down to Rs 19,990.

Flipkart and Nokia will sell six new televisions in different size options, while Thomson too has announced that it will sell its TVs during the sale, starting at Rs 5,999.

Huawei is offering customers discounts on its smart wearables. The company's Huawei Watch GT 2 is available at Rs 12,990 and its Watch GT 2e at Rs 9,990. Its Huawei Band 4 is retailing at Rs 1,799.