During his nearly 90-minute speech at the AGM, Mukesh Ambani made two big statements for his digital businesses: Rs 33,737-crore investment from Google, and the development of homegrown 5G solutions 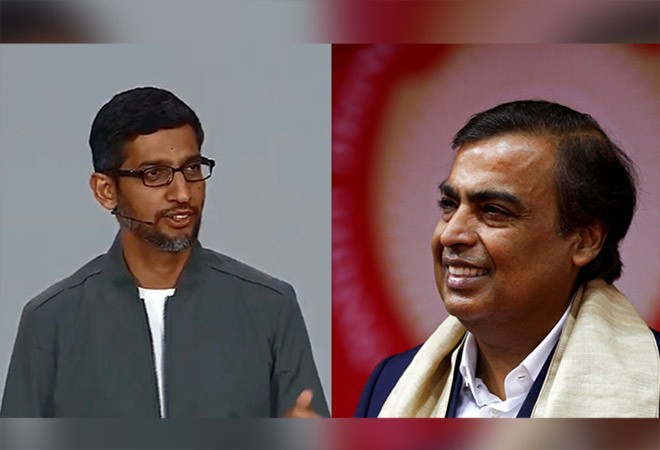 If you can't beat them, join them. Even though Reliance Jio has its own apps like JioChat and JioBrowser that directly compete with Facebook's WhatsApp and Google's Chrome, it has now decided to join hands with the best in the business. After joining hands with Facebook and Microsoft, when Reliance Industries' Chairman and Managing Director Mukesh Ambani announced Jio Platforms' partnership with Google at Reliance Industries' 43rd Annual General Meeting (AGM), it seemed like he has something big on his mind.

Among a host of announcements in his nearly 90-minute speech at the AGM, Ambani made two big statements for his digital businesses: Rs 33,737-crore investment from Google to develop affordable smartphones for masses, and the development of 5G solutions that will not just be used by Jio but could be exported to telecom operators globally at a later stage. The Google deal was part of the Sundar Pichai-run tech giant's recent commitment to invest $10 billion in India over the next 5-7 years.

The Google-Jio partnership seems somewhat synergistic. How? For a long time, Google has been on the lookout for its next billion internet users. While India has been on its radar; the conversion of non-internet users is moving at a certain pace. Jio has finally shown Google the way. With affordable smartphones that are loaded with customised version of Google's Android, there's a big opportunity to tap 350 million feature phone users.

"For Google, the biggest pull is to profile more users in the world which translates into higher ad revenues. It seems that Google sees the current 2G subscribers as its next big opportunity which it can tap with Jio's hardware," says Tarun Pathak, Associate Director at Counterpoint Research.

A JioPhone-type of model will likely play out in the smartphones venture. For instance, Jio has tied up with Qualcomm for chipsets, and KaiOS (a Hong Kong-based company) for operating system. In the Jio smarthphones, KaiOS will be replaced by an optimised Android.

"Google came out with Android One platform for affordable smartphones but it didn't do well. This is perhaps their second big attempt to tap the smartphones category. Jio is likely to undercut the competition with its aggressive pricing. There are also possibilities of bundling Jio smartphones with Jio telecom plans and content services which would drive up ARPUs (average revenue per user)," says a telecom consultant.

It remains to be seen if the idea to make cheap smartphones is also motivated by the recent Rs 50,000-crore electronic manufacturing scheme of the IT and electronics ministry. Under this scheme, the government intends to give production-linked incentives to electronics, particularly mobile manufacturers, in addition to creating clusters and promoting components industry in the country. The scheme aims to push five global and five domestic manufacturing companies.

Though the other big announcement from Ambani lacked details; he suggested at Jio's grand entry into the 5G telecom equipment space. Jio is aiming to capture this market at a time when the Indian government is promoting local manufacturing amid anti-China sentiments across the globe. Globally, Chinese equipment makers like ZTE, Huawei, Fiberhome are facing flak over security concerns, and countries like the UK and the US have already banned them from the 5G deployments. Ambani seems to have sensed a big opportunity there.

Nevertheless, it claims to have designed and developed a complete 5G solution from scratch. "This will enable us to launch a world-class 5G service in India... This Made-in-India 5G solution will be ready for trials as soon as 5G spectrum is available, and can be ready for field deployment next year... Once Jio's 5G solution is proven at India-scale, Jio Platforms would be well positioned to be an exporter of 5G solutions to other telecom operators globally, as a complete managed service," Ambani said at the virtual AGM.

But it won't be easy for Jio to crack this market. Why? The 5G telecom equipments market (antennas and masts) is largely divided between Huawei, Nokia, and Ericsson. They have IPs, technical knowhow, software and hardware capabilities, and experience to boast about.

Though others like NEC and Samsung are pushing hard to enter the fray, they have had limited success thus far due to reluctance at the operators' end. That's because it requires more than just software and hardware capabilities. For a new player like Jio, strong expertise needs to be developed in areas like customer support, network design, and engineering on top of smart pricing and sales strategies.

Take the case of Samsung that benefitted hugely from Jio's partnership. Despite its fair success in the 3G equipment space, the South Korean giant lags in the 4G and 5G race. Jio benefitted from Samsung on two counts though. Jio is believed to have got a favourable deal from Samsung which was looking for a validation for its 4G gears. Then, the 4G equipment from Samsung comes duty-free due to a free trade agreement between South Korea and India.

"Equipments space is a different ball game. Jio cannot do it on its own. They would have capabilities on the software side and use cases to showcase, but they will still rely on equipments makers. Unless the government mandates telcos to use indigenous products, equipments market will not be easy for them. Some domestic players with 4G/5G capabilities have been regularly neglected in favour of Huawei, Ericsson and others. And that too when the country promotes make-in-India products," says a telecom analyst.

Before anyone could realise what Jio is up to, experts say that Ambani seemed to have started his sales pitches early this year when he told US President Donald Trump (who is against Huawei) that his company is not using a single piece of Chinese equipment. This was followed by US Secretary of State Mike Pompeo praising Jio this month.

With three out of five FAAMG (Facebook, Apple, Amazon, Microsoft, Google) giants on his side, Ambani has surely upped the game, but as RIL aims to become a global technology and consumers company, he might have a few roadblocks to clear to make it happen.