In his resignation letter, Sikka has directly addressed the rift between the founders and the management, but hasn't named Narayana Murthy or any other founder member who have been critical of him. 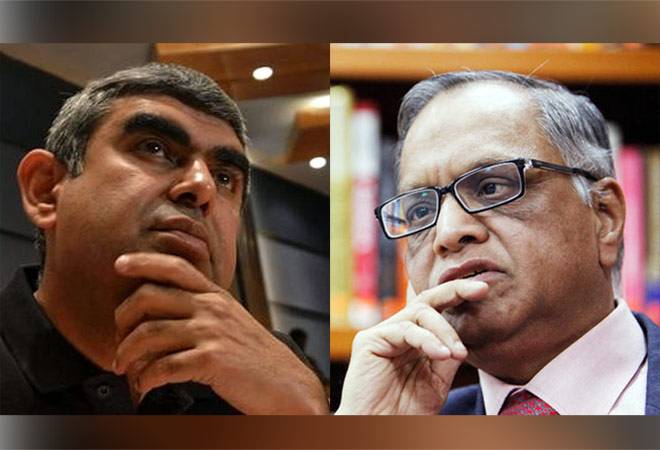 After months of trouble between the founders and the management at IT major Infosys, CEO Vishal Sikka today submitted his resignation. Sikka's decision to move on comes days after Infosys co-founder Narayana Murthy took another dig at Sikka, suggesting he was not a 'CEO material'.

"All that I hear from at least three independent directors, including Mr Ravi Venkatesan (co-chairman), are complaints about Dr Sikka. They have told me umpteen times that Dr Sikka is not a CEO material but CTO material," N.R. Narayana Murthy allegedly wrote in an email to his advisers, according to Mint.

In his resignation letter , Sikka has directly addressed the rift between the founders and the management, but hasn't named Narayana Murthy or any other founder member who have been critical of him.

But, if you read between the lines, the letter makes a scathing attack on the founders. Sikka begins his letter with reference to his discussions with Infosys chairman R Seshasayee, the death of an Infosys employee, OpenAI bot and the Charlottesville incident.

Then he announces his resignation and talks about his role at the Infosys. "I came here to help navigate the company through what I saw as a massive transformation opportunity, to transform our company and restore strong profitable growth, as well as help transform the business of our customers," he writes. But, it's really after this that he comes to ongoing conflict between the founders and the management at Infosys.

"But the distractions that we have seen, the constant drumbeat of the same issues over and over again, while ignoring and undermining the good work that has been done, take the excitement and passion out of this amazing journey," Sikka writes in his letter. He calls the accusations levelled against him "baseless and malicious" and "extremely personal".

What "accusations" is Sikka talking about?

This could be a reference to allegations of wrongdoing in some of Infosys' acquisitions, including New Jersey-based Panaya for Rs 1250 cr, apart from excessive expenses relating to travel, security and his Palo Alto office. It was alleged that the merger and acquisitions team had acted without securing proper approvals.

Infosys later appointed a law firm Gibson Dunn to investigate these allegations. However, the law firm found no evidence of "inappropriate contracting" in its report. "We found no evidence that the CEO received excessive variable compensation or incurred unreasonable expenses for security, travel and the Palo Alto office," it said.

There were further accusations against Sikka. Infosys founders N R Narayana Murthy, Kris Gopalakrishnan and Nandan Nilekani had written to the board expressing their concerns over pay hike to CEO Vishal Sikka. Mohandas Pai had said a CEO's pay should be linked to his performance, achievement of the annual plan and increase in shareholder value.

It was reported that Sikka drew an annual pay package - during 2015-16 - of a whopping Rs 49 crore which was much higher than his counterparts in other Indian IT companies. While the then TCS chief N. Chandrasekaran was paid a pay packet of Rs 25.6 crore by the Tata Group for 2015-16, Wipro CEO Abidali Neemuchwala's annual pay was Rs 12 crore.

There was also the issue of excessive pay to two of Infosys' outgoing officials. Infosys had paid Rs. 17.38 crore to ex-CFO Rajiv Bansal as severance package. This had drawn ire from the founders.

Sikka's direct attack on the founders in the letter

Coming back to the resignation letter,  Sikka also suggested that the work at Infy was suffering due to the mood that had been created by the constant criticisms against him.

Sikka in his letter writes: "This continuous drumbeat of distractions and negativity over the last several months/quarters, inhibits our ability to make positive change and stay focused on value creation. Addressing the noise by itself is damaging; hundreds of hours of my own time has gone into this recently."

Sikka's most stinging reference to the founders come when he suggests in the letter that the situation was "amplified by the very people from whom we all expected the most steadfast support in this great transformation".

This can hardly be called a veiled reference to the likes of Narayan Murthy and Mohandas Pai whose statements targeting the Infy management created a public storm in recent months. The founders had made it amply clear that they did not have confidence in the leadership of Sikka and the Infy management.

Vishal Sikka calls for reason and fairness in letter

Before concluding, Sikka advises the employees at Infy to maintain "the voice of fairness and reason" if such attacks continue. "If these types of attacks continue, I hope each of you will continue to be the voice of fairness and reason - providing the active, emphatic and unequivocal support that the company, the management, the employees, and all of the stakeholders and friends of the company need in order to succeed," he said.

Sikka also hinted that he hoped his decision to resign would make the sides involved reflect, while he hoped for the best for the company's future.

He concludes saying "I will be happy to support all of you to achieve a smooth transition, and serve as your Executive Vice Chair as discussed." It remains to be seen if Sikka will have any significant role to play as the Executive Vice-Chair.

Vishal Sikka resigns as MD and CEO of Infosys: Here's full text of his resignation letter

Vishal Sikka resignation LIVE: It's hard to believe report by a set of lawyers hired by accused, says Murthy