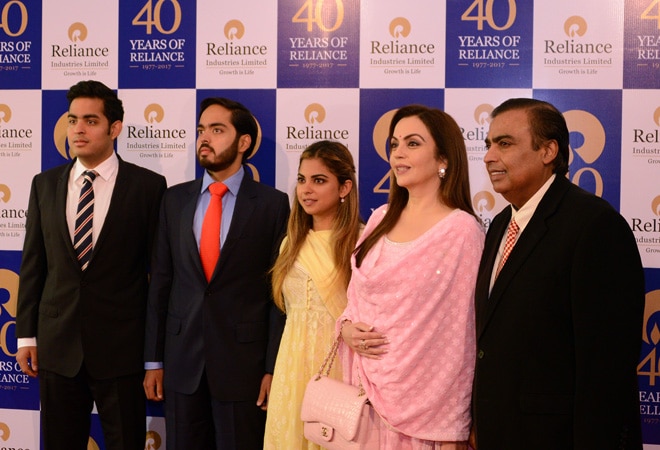 Ambani family has three inheritors in the third generation - Akash, Anant and Isha

Private equity giant Silver Lake's acquisition of 1.75 per cent stake in Reliance Retail Ventures (RRVL), the holding company of Reliance Industries' brick-and-mortar and e-commerce businesses, will underline the fact that billionaire Mukesh Ambani has been able to replicate the success of petroleum and chemicals business to telecom and retail businesses in the volume. The deal, which values RRVL at Rs 4.21 lakh crore, catapults the retail entity into the league of Jio Platforms Ltd (JPL) and Reliance O2C Ltd (oil-to-chemicals). As the Ambani family has three inheritors in the third generation - Isha, Akash and Anant - the creation of three equally strong businesses in valuation size will make succession easier in the family.

JPL is valued at Rs 4.91 lakh crore according to the recent private equity deals. Thirteen investors including Facebook and Google picked up 32.97 per cent stake in JPL at Rs 1.52 lakh crore. The traditional business - which includes two refineries and petrochemical complex in Jamnagar - under Reliance O2C Ltd will be valued around Rs 5.7  lakh crore if the Saudi Aramco deal materialises at the price quoted by Ambani. He said at the shareholders meeting in 2019 that Aramco would pick up 20 per cent stake in Reliance O2C at Rs 1.14 lakh crore. The three businesses - digital and telecom, oil and chemicals, and retail and e-commerce - are aggregately valued at Rs 14.82 lakh crore, which is almost same as the market capitalisation of RIL at Rs 14.1 lakh crore on Wednesday.

With the Silver Lake deal, the retail business RRVL has achieved 80 per cent market value size of FMCG giant Hindustan Unilever (HUL) and three times the size of Avenue Supermarts Ltd (operator of DMart). The fundraising exercise of Ambani has fetched capital to the tune of Rs 2.9 lakh crore (around $40 billion) - including JPL deals, Rs 53,125 crore rights issue, Rs 25,215 crore tower trust deal with Brookfield, Rs 7,629 crore fuel retailing deal with BP Plc, and Silver Lake-RRVL deal - in this year. The funds raised by Ambani is more than 50 per cent of India's foreign direct investment (FDI) of $73.46 billion in the last financial year. The deals have wiped off Rs 1.6 lakh crore net debt of RIL.

Mukesh Ambani said after announcing the Silver Lake deal, "We believe technology will be key to bringing the much-needed transformation in this sector so that various constituents of the retail ecosystem can collaborate to build inclusive growth platforms."

RRVL, which has 12,000 stores across the country, has recently announced its acquisition of retail, logistics and warehousing business of Future group for Rs 24,713 crore. Reliance will also pick up 13 per cent stake in Kishore Biyani's remaining business under Future Enterprises Ltd.

In 2017, Ambani said that he had given 30 per cent annual growth target for 10 years to retail executives that it can catapult the revenue to Rs 4.65 lakh crore by 2027.  The retail business posted Rs 1.63 lakh crore revenue in2019-20, compared to Rs 34,000 crore in 2016-17. The earnings before interest and tax (EBIT) went up to Rs 8,263 crore as against Rs 784 crore in this period. Considering the kind of growth that the retail business achieves in the last three years, Ambani will be able to cross his target before time.