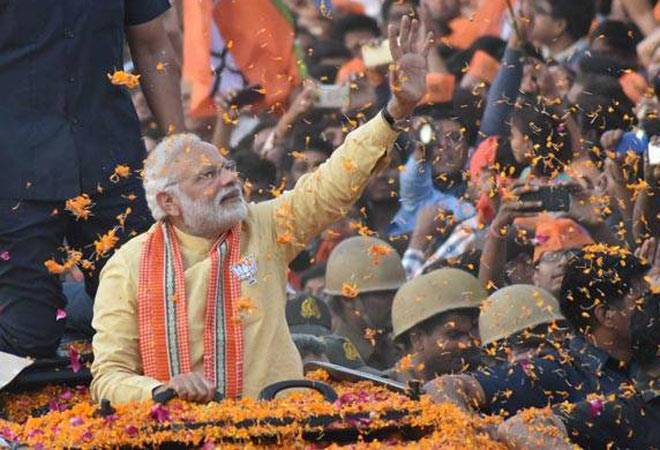 Prime Minister Narendra Modi has led BJP to a stunning victory for the saffron party, with the party taking a massive lead early on in vote counting today morning.

BJP got 311 seats to emerge as the single largest party with a majority to form the government in Lucknow. A saffron sweep is visible across the length and breadth of Uttar Pradesh, except some pockets where Samajwadi Party has done well.

The ballot in the northern state represents the most important electoral test that PM Modi's Bharatiya Janata Party (BJP) has faced since winning the 2014 general election.

The victory is an endorsement of PM Modi's stewardship of Asia's third-largest economy after his high-risk decision last November to scrap high-value banknotes worth 86 per cent of the cash in circulation.

Here are all the LIVE updates of the D-Day:

#TsuNaMo
People of UP and Uttarakhand have voted for politics of performance: @AmitShah#Verdict2017
Live: https://t.co/4fqxBVUizLpic.twitter.com/lLaiTUWIn8

#TsuNaMo
People of UP and Uttarakhand have voted for politics of performance: @AmitShah#Verdict2017
Live: https://t.co/4fqxBVUizLpic.twitter.com/lLaiTUWIn8

#TsuNaMo
This is the biggest victory since independence for a party: @AmitShah#Verdict2017
Live: https://t.co/4fqxBVUizLpic.twitter.com/BWWXzF6wUp

Spoke to @capt_amarinder & congratulated him on the win in Punjab. Also wished him a happy birthday & prayed for his long & healthy life.

Grateful to the people of Punjab for their overwhelming support! With this verdict, it's time to bring back the heydays of Punjab!

For the first time people are rising above cast & religion and voting for development: Jitender Singh, MoS, PMO #ITVideo#TsuNaMopic.twitter.com/4Ht6uHrmsD

PM @narendramodi ji sees 125 crore people, not as majority or minority vote banks, we think of the nation as one #ElectionResults

Technology at work. Find out how @BJP4India has changed the colour of UP map. @ShivAroor explains. #TsuNaMo
Live: https://t.co/hG4fMLW6YEpic.twitter.com/DLCwemmvwO

Who will become Uttarakhand CM? Here's what our political analysts have to say #Verdict2017
Watch LIVE https://t.co/4fqxBVUizLpic.twitter.com/VdN8Veddvl

#BSP hasn't been able to open its account in #Uttarakhand
Watch #Verdict2017 : https://t.co/TFg6M7I5XDpic.twitter.com/zT8Um6Psgg

How the hell did almost all the experts/analysts miss this wave in UP? It's a tsunami not a ripple in a small pond.

No decision yet on the new UP CM: Keshav Prasad Maurya, UP BJP chief, said #Verdict2017#ITVideopic.twitter.com/BcWtrckq4o

10:47 AM: Sambit Patra talks about the potential CM candidate in UP

#Verdict2017
It's BJP everywhere in UP. @rahulkanwal shares the latest numbers from UP assembly polls.
Live:https://t.co/oIU1FtZewBpic.twitter.com/vnUtSdIF1A

In #Uttarakhand, @BJP4India has a reason to rejoice!
Watch #Verdict2017 : https://t.co/TFg6M7I5XDpic.twitter.com/IynMMYsI7R

#Verdict2017
Which party was the key influencers on @facebook ​. @anjanaomkashyap ​ explains this exclusive data to you. pic.twitter.com/DkTbVBC5av

BJP now surging ahead in 200+ seats in UP trends. Explains the prime minister's big Varanasi push. To set a record.To prove detractors wrong

.@BJP4India seems to be making it tough for the opponents in #UP#Verdict2017pic.twitter.com/vyoNMs5rQo

UP election results: Goodbye Akhilesh! But this may just be a new beginning for the Samajwadi Party scion