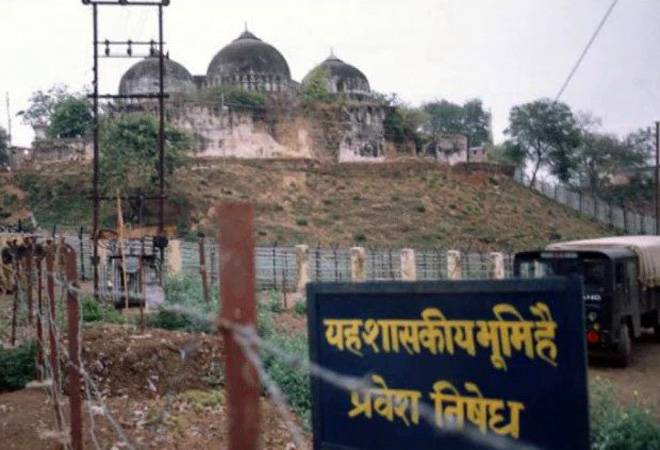 In Part III, the article focuses on larger implications of the Ayodhya verdict

Now that it is clear how the Supreme Court's five-member bench arrived at its verdict in Ayodhya case, it is time to examine closely its implications and seek answers to some of the disturbing questions that arise out of it - some of which have either not been addressed or inadequately addressed.

Is the verdict majoritarian in character?

The verdict is vulnerable to such charges because:

Why does the court make the inner and outer courtyards a composite site? In "Suit 4: Sunni Central Wakf Board" it reasons: "In the absence of historical records with respect to ownership or title, the court has to determine the nature and use of the disputed premises as a whole by either of the parties." (emphasis added, page 883)

It further says: "For the Hindus, the entire complex as a whole was of religious significance." (emphasis added, page 884)

(b) In its "Conclusion on title", the court further says: "We have already concluded that the three-way bifurcation by the (Allahabad) High Court was legally unsustainable. Even as a matter of maintaining public peace and tranquillity, the solution which commended itself to the High Court is not feasible. The disputed site admeasures all of 1500 square yards. Dividing the land will not sub-serve the interest of either of the parties or secure a lasting sense of peace and tranquillity." (emphasis added, page 922)

(c) "Differential burden of proof" being demanded from the Hindus and Muslims to prove their possession of the disputed structure in which a higher burden is on the Muslims, as Prof Faizan Mustafa, vice-chancellor of the Hyderabad's NALSAR University of Law, and many other experts have already pointed out. And also because the court has already observed how since 1856, the Hindus have been depriving the Muslims of holding their prayers, desecrating it and ultimately demolishing the masjid.

Also Read:Ayodhya Verdict: Why it would worry us for years to come

Other critical questions arising out of the verdict

Business Today reached out to two eminent legal experts, Prof Mustafa and PDT Achary, former secretary-general of the Lok Sabha (2005-10), for answers. Here is what they have to say.

1. On granting legal rights (title of land) to the "deity of Lord Ram" which was placed inside the disputed structure unlawfully in 1949

Prof Mustafa: "It is an interesting dimension that has not been debated in the dispute. It is a fact that the Ramlalla's idols were put inside the mosque on 22 December 1949 and the court did hold this act as illegal. The same Ramlalla filed a suit in 1989 and said that the mosque was constructed in 1528 after demolishing his temple. But the court admitted he couldn't give any evidence whatsoever of the fact of demolition or his ownership of land prior to 1528.

"His followers then demolished the mosque. The first rule of equity is that one who seeks equity must come with clean hands and an illegal act does not give a claim to equity. Though he cannot be blamed for the actions of his followers, yet his right to title in a civil suit has to be closely examined as he is like any other party in a civil suit. I think the court overlooked this vital aspect."

PDT Achary: "An illegal act, declared as such by a court, can't create any legal right in the perpetrator. The juristic person does not get a legal right as a result of an illegal act. Violation of law does not create equitable right. The law of equity is applied when the statute is not capable of doing justice. This is a part of the inherent power of the courts. Section 151 of the Code of Civil Procedure (CPC) contains the essence of law of equity. But it can be invoked when there is apparent justice in the claim."

Also Read: Ayodhya Verdict: Does the evidence add up to ownership of the disputed land to the Hindus?

2. On the application of the law of limitations to the deity of Lord Ram

Prof Mustafa: "It should have been applied as his cause of action should have been deemed either in 1528 if he proved his ownership of land or demolition of the temple, or at best in 1856 when the court has said that the Muslims started exclusively praying in the inner courtyard with some assertion of the right to pray by the Hindus."

PDT Achary: The law of limitation is in respect of filing a suit. The Nirmohi Akhara's petition has been dismissed on the ground of limitation. The Supreme Court found that in this case, the limitation is 6 years and not 12 years, which began from 1950. The Akhara filed the case in 1959 and therefore held time-barred. The court held that the Akhara's case comes under Article 120 of the Limitation Act of 1908."

3. On the application of the law of adverse possession equally for the Hindus and Muslims

Prof Mustafa: "I have a little difficulty because it was only an alternative plea of the Sunni Waqf Board and was made in response to claim of a temple prior to the construction of the mosque. The court had put a very heavy burden on the Muslims to prove their exclusive prayers as proof of possession from 1528 to 1856 but for the Hindus mere assertion of right was considered enough of not only possession but eventual granting of title. The Hindus had only possession of the outer courtyard and just an asserted right to worship in the inner courtyard and it was enough to get both. This is unusual and highly controversial."

PDT Achary: "The Muslims side's plea was that even if there was a temple on whose remains the mosque was built, they have the right to the mosque and the land it stands on by way of adverse possession since 1528. This was an alternate plea which is not very strong."

4. On the test of constitutionality in terms of its secular character and fundamental rights to practice religion without discrimination

Prof Mustafa: "Yes it does (passes the test of constitutionality) as the court has yet again in forceful language reiterated secularism as the basic structure of our Constitution. But then secularism does not mean merely a religion-neutral state but special safeguards for the minorities. The court, in the end, preferred to go with the majority's beliefs rather than hard evidence. The title of each mosque is with Allah. He lost the title just because the followers of Lord Ram asserted the right to pray in the inner courtyard. But then such things do happen in many judgments."

PDT Achary: "Through this judgement, the Supreme Court has accepted the plea of the Hindu parties that the whole of the masjid site belongs to them not on the basis of solid evidence but on travelogues and oral depositions. The claims of the Muslims were rejected on the ground that they could not produce any document to prove their continuous possession. Equality before the law and equal protection of law are the cardinal constitutional principles which stand eroded here."

In addition, there are few other questions too.

5. On the constitutionality of the apex court's direction to the Central government, a secular state, to facilitate building a temple

The Ayodhya verdict directs the Central government to "formulate a scheme" within three months, set up a trust, hand over possession of the inner and outer courtyards to the board of trustees and "make necessary provisions in regard to the functioning of the trust" the powers of which include "construction of a temple". (page 926)

But for the Sunni Central Waqf Board, it says a "suitable plot of land measuring 5 acres" be given by the Central or state government "at a suitable prominent place in Ayodhya" and that the "Sunni Waqf Board would be at liberty, on the allotment of the land, to take all necessary steps for the construction of a mosque on the land...". (emphasis added, page 927)

Is this not clear discrimination by the Supreme Court? Why were the Muslims not treated on par with the Hindus in building their religious places? Why a special privilege to the Hindus?

But more importantly, as Justice K Chandru, former Madras High Court judge, has pointed out, in the SR Bommai case of 1994, the Supreme Court had clearly stated that the (secular) state should be divorced from religion.

Indeed, discussing the Constitutional framework, the apex court had said in that case: "The State does not extend patronage to any particular religion, State is neither pro particular religion nor anti particular religion. It stands aloof, in other words, maintains neutrality in matters of religion and provides equal protection to all religions subject to regulation and actively acts on secular part."

The obvious question then is: Is it right for the Supreme Court to direct the Central government, a secular state, to facilitate construction of a temple through a scheme and a trust?

6. On possible violation of the spirit of the Places of Worship (Special Provisions) Act of 1991

Although this law exempted the Ramjanambhumi-Babri masjid case, it does not allow any change in the religious character of any place of worship "as it existed" on 15 August 1947. Does the Ayodhya verdict then not a violation of it in spirit, if not in letter?

7. On legal validity and enforceability of an unsigned verdict

The Ayodhya verdict and its "addendum" are unsigned.

Since no court of law in India, let alone the Supreme Court, accepts unsigned affidavits or evidence of any kind whatsoever from any litigant before it, should litigants accept unsigned verdict?

Also, what is the legal validity or enforceability of such verdicts - from the Supreme Court of India or any court of law for that matter?

Not just outsiders but the five-member bench of the Supreme Court has a lot to ponder over and answer.