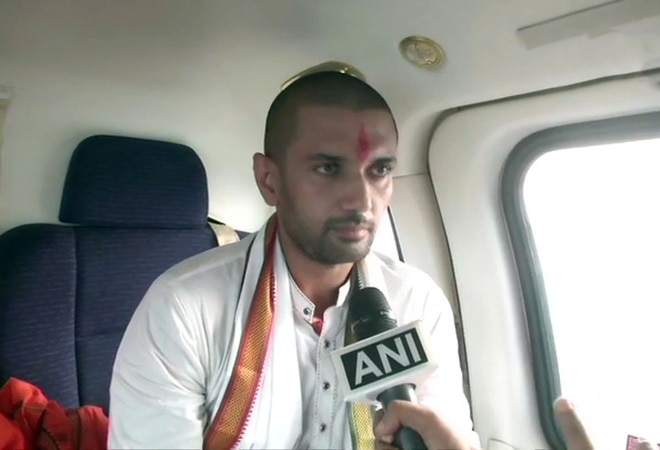 Bhagalpur has been known for long as a BJP stronghold, which even RJD supremo Lalu Prasad could not decimate during the peak of his political powers in the 90s, but as the silk city of Bihar goes to polls on Tuesday it has come to symbolise the risk the ruling NDA faces from its former constituent Lok Janshakti Party in these assembly elections.

This is among the few seats where the Chirag Paswan-headed party has fielded a candidate against the BJP while going out all guns blazing against Chief Minister Nitish Kumar-headed JD(U) across the state.

The LJP's clever ploy of backing influential local politicians, mostly upper castes, with its traditional support base of a section of Dalits to make a space for itself in the state's crowded political arena has upset the traditional calculations in this constituency, members of different political parties say.

It has given ticket to former BJP politician Rajesh Verma, a young and resourceful leader coming from the Marwari community, and his potential draw among the trading castes, who are in large numbers here, is keeping the saffron alliance on edge. The BJP had been winning the seat since 1990 till the election of Union minister Ashwini Kumar Choubey, who was chosen MLA for four times in a row from here, to Lok Sabha in 2014, and the party's separation with the JD(U) gave the opposition an opening.

Ajeet Sharma of the Congress won from here in the 2014 bypoll and then in the 2015 elections, and is now in the fight against BJP's Rohit Pandey.

The pique within the JD(U) that the LJP has pitted candidates against it across the state while largely sparing the seats where the BJP is in the fray, has also come into play here after a purported audio clip of Bhagalpur MP Ajay Kumar Mandal, who is from the JD(U), asking a party worker to not campaign for the saffron party candidate in an assembly seat in the district went viral.

Mr Mandal, later, claimed that the clip had been manipulated to portray him in a bad light.

A BJP leader told PTI that the party leadership has asked them to work overtime in every constituency, including those being fought by the JD(U), to dispel any misgivings but observed that it will be final results on November 10 that will spell out as to what extent the LJP has succeeded in its campaign to damage Mr Kumar's party.

The LJP has fielded its candidates in more than 140 seats, including in 115 where the JD(U) is in contention, of the total 243 assembly constituencies. Chirag Paswan's aggressive campaign against Mr Kumar over issues like corruption, unemployment and availability of liquor despite prohibition, has been drawing curious crowds across the state.

At a rally in Laukaha in Madhubani on Monday, he asked a vocal crowd if a chief minister involved in "corruption" should not be sent to jail and jabbed Kumar over prohibition, alleging that liquor is now being delivered at home.

His public appearance at times sporting a holy ''tika'' and promises like building a temple for goddess Sita is Sitamarhi, where she is believed to have been born, has also endeared him to a section of voters who usually back the NDA but are dissatisfied against Nitish Kumar after his 15 years at the helm, except for a brief period.

This coupled with Mr Paswan's laudatory references to Prime Minister Narendra Modi has ensured that LJP candidates have been drawing support from a chunk of upper caste voters, seen as a core base of the BJP, in many constituencies spread across the state. From Muzaffarpur to Begusarai and Bhagalpur districts, the LJP is making its presence felt in a number of assembly constituencies going to the polls on Tuesday.

It is not how many seats the party founded by Ram Vilas Paswan, who died last month, wins but in how many seats does its presence impact the final result which will be crucial to the final outcome of the polls. Voters will cast ballots in 94 seats in the second phase of the assembly polls on Tuesday.

Also read: NDA defeated 'double-double yuvraj' in UP, it'll do the same in Bihar: PM Modi at Chapra rally