The 1929 and 2007-08 financial crises have amply demonstrated how unbridled growth of liquidity and household credit caused havoc in people's lives and economies. Pushing for more of the same at the time of massive loss of jobs and incomes is not such a good idea Many leading economists, including Nobel laureate Abhijit Banerjee, have been repeatedly asking for large cash transfers to the poor who have lost jobs and incomes

The extraordinary aspect of the central government's economic package of Rs 21 lakh crore to deal with the COVID-19 impact is its complete reliance on liquidity measures with very little fiscal spending. Even the schemes targeting small businesses (MSMEs), self-employed, street vendors, poor farmers, and migrants are about collateral-free loans, credit guarantee schemes and new funds to be helmed by banks and financial institutions.

Estimates of actual fiscal impact of the seemingly huge package range from just about Rs 1.5 lakh crore or 0.75% of India's GDP by the British brokerage firm Barclays Research to Rs 2 lakh crore or 1% of the GDP by the State Bank of India's research desk. India's central bank RBI's liquidity support (of Rs 8 lakh crore) alone constitutes 38% of the total package.

This is problematic for two reasons.

Firstly, the supply-side measures like liquidity infusion don't help an economy hit by demand recession, as has been India's case even before the pandemic appeared. Many leading economists, including Nobel laureate Abhijit Banerjee, have been repeatedly asking for large cash transfers to the poor who have lost jobs and incomes. Business Today had earlier shown how lack of demand led to lower industrial output and capacity utilisation, thereby reducing industry's need for credit. There is little reason to believe that poor households or industry would now rush for credit.

Secondly, India is risking 'financialisation' of economy, a term increasingly becoming familiar and refers to the growth of financial sector relative to economy. The world over, economists are warning against unbridled growth of this sector, linking it to financial crises and worsening inequality, especially after the 2007-08 financial meltdown. These economists include those of the global champion and driver of financialisation, the International Monetary Fund (IMF).

Prof Mariana Mazzucato of the University College London (UCL), an acknowledged authority on the subject and author, writes in her 2018 book 'The Value of Everything: Making and Taking in the Global Economy' that a large and growing financial sector has long been presented as a sign of UK and US success.

Countries aspiring to achieve their level of prosperity have been advised, especially by multilateral creditors like the International Monetary Fund (IMF), to make 'financial deepening' - the expansion and deregulation of banks and financial markets - as part of the wider liberalisation.

She calls for wholesome changes in the way economic values are measured and favours tighter control on finance that the 1929 and 2007-08 financial crises brought about but have weakened considerably thereafter.

But before getting more into that, here is what the IMF itself says on the subject.

Though the IMF has been prevaricating, especially after the 2007-08 financial crisis, it is persistent in its push for the financial sector liberalisation or 'financial deepening', nevertheless.

For example, in 2015, its study meant for internal consumption, 'Rethinking Financial Deepening', said its first and foremost finding was that "many benefits in terms of growth and stability can still be reaped from further financial development in most EMs" (emerging markets).

Why does the IMF talk about emerging markets, not advanced ones? It knows that the financial deepening has already damaged advanced economies. While providing the rationale for its study it admits as much by saying that "the 2008 global financial crisis raised some legitimate questions...that the crisis originated in advanced economies (AEs) where the financial sector had grown both very large and very complex". Instead of answering those legitimate questions, it hedged the bet.

Is there a direct link between financial crises and growth of financial sector (credit)?

The IMF answers this in another internal study marked 'Finance and Inequality', published in January 2020. The answer is in the 'third' finding of this study.

The IMF admits a direct relation between growth of financial sector and financial crises. It particularly talks of "too much credit, including to lower-income households" in the US contributing to the 2007-08 crisis.

Does this ring a bell in India in the way the Rs 21 lakh crore economic package has been designed to provide more and more credit to poor households running small businesses, street vendors, migrants and farmers, rather than cash transfers that economists have been asking for?

The initial finding of this IMF study is also significant. It says, initially, financial depth--that is, the size of financial sector relative to economy, helps in reducing inequality, but only up to a point after which inequality rises. 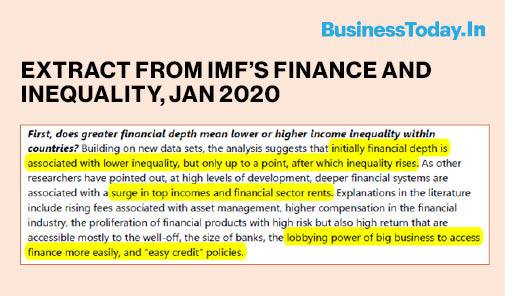 At what point the financial sector's growth becomes a liability?

The study presents a graph reproduced below. In the graph, Gini Coefficient (Y-axis) has been plotted against financial depth indices of financial institutions and financial market (X-axis) for about 200 countries over a period of 1993-2017.

Where does India fit in the graph? This is difficult to answer as it calls for an elaborate exercise and availability of adequate data. The IMF study does not provide India specific data or calculations.

Other critical findings relevant to India are: (i) inequality increases before a financial crisis (ii) inequality falls during the crisis and begins to rise afterwards as lower-income households disproportionately experience income loss and (iii) higher growth in debt is associated with a greater probability of banking crisis.

There is enough evidence to show that both the 1929 Great Depression and 2007-8 Great Recession were heralded by the collapse of insufficiently regulated banks and stock markets.

The financial sector built up bubbles that burst, leading to banking collapse, massive job loss, and damages to non-financial sectors. Governments had to then bail out some of the banks and economy in general by pumping in taxpayers' money.

Unbridled speculative and betting activities by the financial sector, rather than genuine value creation, played a big role in creating those crises. There have been regional financial crises too, like in Latin America in 1982-83 and East Asia in 1997, in which the role of financial sector has been questioned.

Making and unmaking of global economy

Prof Mazzucato narrates how the enormous clout of financial sector came about in 1970s when it was included in the calculation for GDP. Until then, finance was just an "intermediate input"--a service contributing to the functioning of other industries that were the 'real' value creators. The financial sector was perceived as "a distributor, not a creator of wealth".

The introduction of financial sector into GDP also coincided with deregulation of the financial sector (that had been tightened after the 1929 Great Depression), relaxed controls on how much banks could lend, interest rates they can charge and products they can sell, increasing its hold on the 'real' economy (that produces goods and services, like agriculture, industry, services, rather than banks and stock markets).

"Today the issue is not just the size...and how it outpaced the growth of the non-financial economy (e.g., industry), but its effect on the behaviour of the rest of the economy, large parts of which have been 'financialised'..." she writes. Prof Mazzucato also asserts that rather than creating value by investing in long-term future of businesses, the financial sector is capturing value from other sectors through interest differentials and expensive transaction costs and when private equity (PE) and venture capitals (VCs) control non-financial companies, the main objective is not to produce new things but maximise shareholders' value through stock buybacks (too boost stock prices and executive pay).

Attempts to regulate banks after the 2007-08 crash have led to less-regulated 'shadow banks' to expand into areas where banks were forced to contract.

A similar situation has developed in India. The RBI's 2018 banking trend report clearly states how the NBFCs witnessed a strong credit expansion in FY18 and FY19 (up to September) while that of banks shrunk due to "rising non-performing assets (NPAs) and pervasive risk aversion". The banks actually started lending more to the NBFCs, than industry. The NPAs (many of which are a result of banking fraud that the cases of Nirav Modi, Mehul Choksi, Vijay Mallya and many others have established) have now travelled to the NBFCs, leading to the collapse of some, like IL&FS and DHFL.

British tax expert and author Nicholas Shaxson writes in his 2018 book 'The Finance Curse' how the financial sector's growth has been counter-productive for the UK.

He writes the UK's banking assets stood at 50% of the GDP for a century until 1970 but by 2006, grew to 500% of the GDP and stayed there since then. If the assets of insurance and other financial institutions were added, the actual size of the financial sector would be 1,000% of the GDP.

"You'd expect the enormous growth in our financial sector to have generated a fountain of investment capital for other sectors in our economy, but the exact opposite has happened. A century ago, 80 per cent of bank lending went to finance businesses. Now, banks are lending mostly to each other, housing and commercial real estate, little more than 10 per cent of UK bank lending goes to businesses outside the financial sector", he adds.

Shaxson laments that despite the tremendous growth of its financial sector, the UK's per capita GDP is now lower than its northern European peers, the UK is much more unequal and has poorer overall scores in health and well-being.

Growth of finance sector in India

What is the state of India's financial sector?

Here are some representative indicators of its growth since 2004-05 using the 2011-12 national account series (GDP).

The assets of banks and mutual funds (MFs) as percentage of GDP are two of the four ratios used by the IMF in its 'financial depth' index for financial institutions (January 2020 study).

According to the RBI's data, the assets of Scheduled Commercial Banks (SCBs), minus the Regional Rural Banks (RRBs), have grown from about 74% in FY05 to 122% of the GDP (2011-12 base current prices) in FY18. (RRBs have a relatively smaller asset base, banking sources say. The assets under mutual fund companies (MF) have gone up from 5% to 17% of the GDP during the same period. 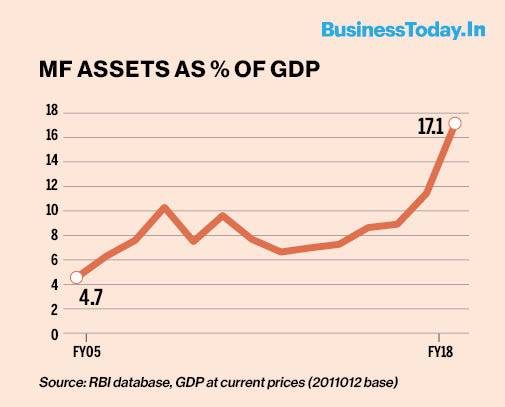 The IMF uses stock turnover and market capitalisation as percentage of GDP as two of the five ratios for its 'financial depth' index for financial institutions (January 2020 study).

The graph below provides how they have grown over the years in the largest Indian stock market NSE (oldest one is BSE). These growth graphs give a sense of the growth of financial sector, not the whole picture.

Therefore, nothing can be said about India's vulnerability to a financial crisis on the basis of these graphs or how the economic package of Rs 21 lakh crore contributes. But going by the global experiences of nearly 100 years, it is safe to assert that caution is called for. That such a liquidity-heavy package would do little to remove the pain in households or the economy is another debate.

FIR against Sonia Gandhi for Congress' tweets on PM-CARES Fund