Coronavirus outbreak: Air India's jumbo B747 aircraft made two flights to Wuhan city to evacuate a total of 654 Indians from the Chinese city of Wuhan 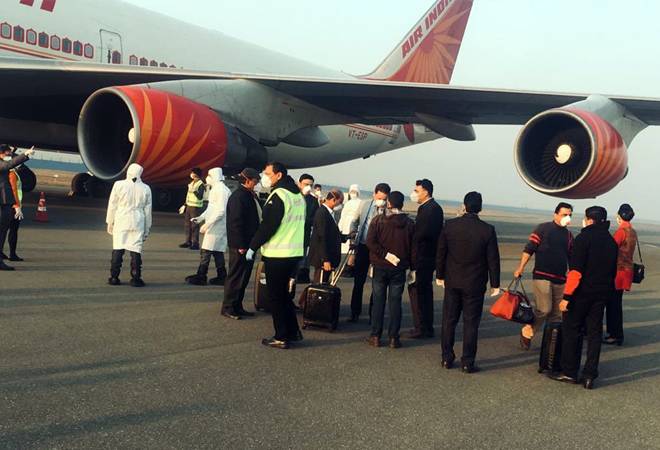 Coronavirus has killed 304 people and infected over 14,380 others in China while two people from Kerala have tested positive for the virus in India

The second Air India flight carrying 323 Indian and seven Maldivian citizens from China's coronavirus-hit Wuhan city landed in New Delhi this morning. With this, a total of 654 Indians have been evacuated from the Chinese city of Wuhan where the outbreak of deadly coronavirus has killed hundreds of people.

The deadly virus has killed 304 people and infected over 14,380 others in China while two people from Kerala have tested positive for the virus in India.

According to officials, six Indians could not board the first flight as they were stopped by the Chinese immigration officials due to high temperature. The may be quarantined to undergo tests to determine whether they have symptoms of the coronavirus, the officials added.

Vikram Misri, the Indian ambassador to China, said that twenty-five others stayed back on their accord, adding that there may still be about 100 Indians who remained in Hubei province for which Wuhan is the provincial capital.

"The second Air India flight from Wuhan has just taken off for Delhi with 323 Indian citizens on board. 7 Maldives citizens are also being evacuated," tweeted Vikram Misri, the Indian ambassador to China.

He also thanked the Ministry of Foreign Affairs of China and local authorities across Hubei province for their assistance.

The 2nd #AirIndia flight from #Wuhan has just taken off for #Delhi with 323 Indian citizens on board. 7 Maldives citizens are also being evacuated. Grateful once again to @MFA_China and local authorities all across #Hubei for their assistance. @MEAIndia@DrSJaishankar@EOIBeijing

"Want to thank my team at @EOIBeijing which mounted a non-stop almost 96-hour long operation to coordinate a complex airlift under challenging circumstances for us, the passengers and local authorities in #Hubei and #Wuhan," he said in another tweet.

"A special word of appreciation for two of our officers who are on board the plane - Deepak Padmakumar and M Balakrishnan - they showed exemplary fortitude and a real spirit of public service by travelling to ground zero in #Wuhan to coordinate airport arrangements. Kudos to both," he tweeted.

Relieved to see AI 1349 return safely to #Delhi with 324 of our fellow citizens from #Wuhan in #China | Grateful to @MFA_China for their assistance as well as local authorities in #Hubei and @Wuhan | Thank you also to #AirIndia and our team in @EOIBeijing | Now for second flight. pic.twitter.com/rhJvBGMpYj

Indian Army has also set up a quarantine facility near Delhi in Manesar for all those who have been evacuated from China's Hubei province. People will be monitored for signs of any infection for 2 weeks by qualified medical professionals. Till now, around 124 positive cases of coronavirus have been reported in many countries, including India.