This is just the first tropical cyclone of the 2020 North Indian Ocean cyclone season, and the destruction seems humongous when facts are put into perspective, especially against the state's budgeted revenue receipts Although cyclones affect the entire coast of India, the East Coast is more prone to it compared to the West Coast

Amphan, which means sky in Thai, could very well live up to its name as the super cyclone has caused unprecedented havoc in parts of West Bengal and Odisha with West Bengal staring at an estimated losses of up to Rs 1 lakh crore, as pegged by Chief Minister Mamata Banerjee.

Another measure that gauges the economic impact of this cyclone globally is its proportion in the direct economic losses and damage from natural disasters in 2019, which stood at around 6 per cent. The damage was almost 1.6 times the overall economic loss of $8.1 billion caused by the extremely severe cyclonic storm FANI which had hit India and Bangladesh in the first week of May 2019. Globally, direct economic losses and damage from natural disasters in 2019 were estimated at $232 billion, as per AON's Weather, Climate & Catastrophe Insight, 2019 annual report. This was, however, 3 per cent lower than the average $239 billion and 5 per cent lower than the median $243 billion during the 21st century. The costliest global peril around the world since 2000 has been tropical cyclone, according to the report. The losses were extreme in 2004, 2005, 2012, 2017 and 2018, which accounted for nearly $909 billion of the total $1.43 trillion alone. 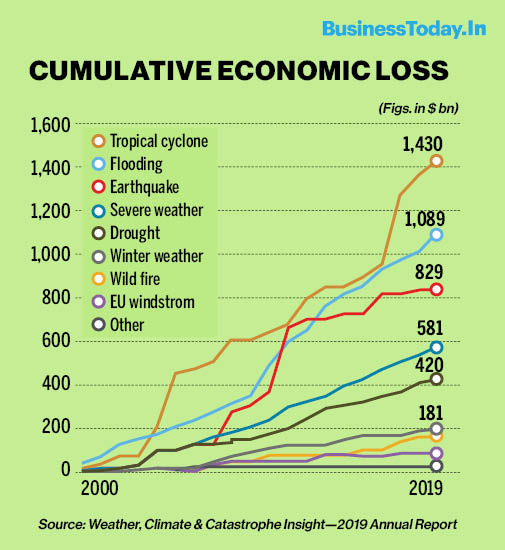 The Indian sub-continent is the worst affected region of the world with tropical cyclones having a coastline of 7516 kms. There are 13 coastal states or UTs surrounding 84 coastal districts which are affected by cyclones. Four states -- Andhra Pradesh, Odisha, Tamil Nadu and West Bengal -- and one UT - Pondicherry - on the East Coast and one state -- Gujarat -- on the West Coast are more vulnerable to cyclone disasters. Normally cyclones occur in the month of May-June and October-November, with primary peak in November and secondary peak in May. Although cyclones affect the entire coast of India, the East Coast is more prone to it compared to the West Coast.

As per an IMD release in December 2019, 12 cyclonic disturbances (CDs) developed over the north side of the Indian Ocean in 2019 including four over the Bay of Bengal and eight over the Arabian Sea.