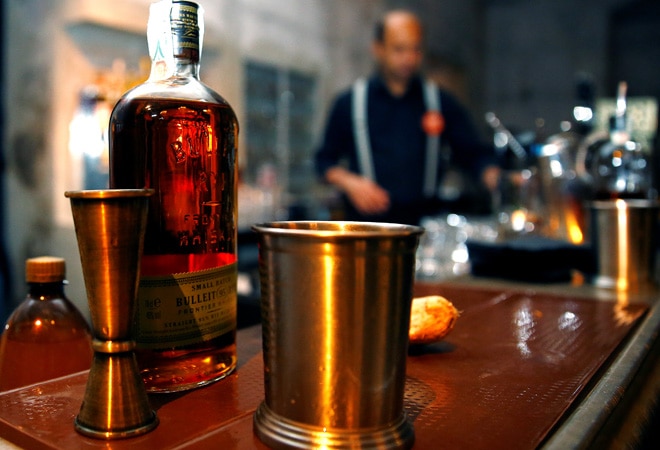 Is the Delhi government putting small and medium liquor manufacturers out of business in its bid to increase revenues from sale of liquor?

The Delhi government has drawn up an ambitious plan to boost revenue from sale of liquor in the state by 50 per cent from Rs 5,000 crore to Rs 7,651 crore. This includes excise duty collection of Rs 6,412 crore, a 42 per cent jump from the existing Rs 4,500.

A report prepared by a committee to augment excise duty collection from and simplifying liquor pricing mechanism has among other recommendations suggested discontinuing whisky and rum with MRP up to Rs 140, and steeply increase the criteria for liquor brands to get registered in Delhi.

The present qualifying criteria for getting registered in Delhi is a total sale of 60,000 cases of a brand anywhere in country, including Delhi, in any of the previous two years. The proposed excise policy increases it to a total of 10 lakh cases of a brand (including all its variants) outside Delhi.

Further they should also have a minimum sale of one lakh cases in at least five such states whose total liquor sale is more than that of total sale of Delhi in the previous year.

Medium and small manufactures have said that these stringent conditions mean that only large MNC liquor players would be able to register and sell in Delhi market.

A Delhi-based liquor manufacturer on the condition of anonymity said that unlike the Delhi government thinks, these measures will drive out small brands making it difficult for consumers to afford liquor which will ultimately show in the revenue collections.

On abolishing whisky and rum brands below Rs 140, the manufacturer mentioned above says that government's rationale for doing so is to make quality products available to the consumers. "Yet it is fine with country liquor, which is any day much inferior to whisky or rum," he says.

On the stringent condition for getting registered in Delhi market, the liquor manufacturer says most markets that sell more than Delhi are southern states, and north India-based liquor brands do not sell much in south and vice versa. Therefore, the condition that the brands must sell at least 1 lakh cases a year in five markets bigger than Delhi makes it impossible for north-based local manufacturers to get a registration in Delhi market.

"Does the committee mean to say all Indian brands presently available in Delhi are not quality products and only if they sell a minimum prescribed quantity in five states or more, they become quality products," says another liquor manufacturer.

The committee also proposes to increase the license fee for retailer from Rs 8 lakh to Rs 75 lakh. The Delhi government earned Rs 40 crore in 2019-20 from license fee from retailers, which it now hopes to increase Rs 659 crore through an increased annual license fee.

The report on increasing revenue from liquor sale also proposes to increase the number of retailers from 720 in present to 916. It says that the ratio of retail vends to population is very low is Delhi, which has a 720 retail vends for a population of 1.9 crore. Mumbai and Bengaluru have 1,190 and 1,794 retail vends with populations of 1.23 crore and 1.93 crore, respectively.

Among other measures suggested by the panel to augment the revenue from sale of liquor include lowering the legal age for drinking from 25 years to 21 years.

The committee has invited stakeholders' comment on these proposals. The last date for filing comments is January 21, 2021.

Rebooting Economy 60: India in a financial mess of its own making