On January 26, as the agitating farmers did not follow the prescribed routes and entered Delhi by breaking barricades, leading to clashes with police, and damage of life and property 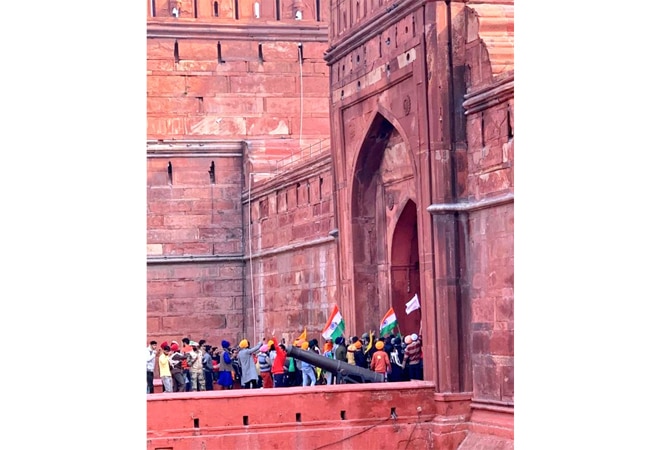 The Delhi Police has announced a cash reward worth Rs 1 lakh each for information that can lead to the arrest of Deep Sidhu, Jugraj Singh and Gurjant Singh after allegations that they encouraged mob to hoist religious flags at the Red Fort on January 26.

The Delhi Police has also announced rewards worth Rs 50,000 each for the arrest of farm leaders like Buta Singh, Jajbir Singh, Iqbal Singh and Sukhdev Singh over their alleged involvement in the tractor rally violence on the Republic Day.

Meanwhile, Delhi Chief Minister Arvind Kejriwal has said the Delhi government is releasing a list of 115 protesters arrested by police in relation to the Republic Day incident . " They are in different jails of the city. Our government will make every effort to trace the protesters who are missing and I will even speak to the Lt Governor and the Centre if the need arises."

Kejriwal's comments followed his meeting with a delegation of the Samyukt Kisan Morcha's legal team, which presented him a list of 29 missing farmers. This delegation also raised the demands of a judicial inquiry into the alleged "conspiracy against the farmers' protest", and a medical board to examine all those incarcerated.

On January 26, as the agitating farmers did not follow the prescribed routes and entered Delhi by breaking barricades, leading to clashes with police, and damage of life and property. They also entered the Red Fort and unfurled religious flags.

Meanwhile, the leader of the Bharatiya Kisan Union (BKU) Rakesh Tikait has accused the Delhi Police of a conspiracy behind the tractor parade fracas on Republic Day. Tikait told news agency ANI: "The Delhi Police has conspired to do this and it is the main culprit. It barricaded the route allotted to us for the tractor rally and opened Delhi giving way to the farmers to enter the national capital."

He added that farmers have been holding panchayats for the last 35 years. "Protests are organised at Jantar Mantar but did any farmer organisation reach Parliament? A man was misled, an announcement was made, and after 13 hours a religious flag was hoisted at the Red Fort. This is being investigated."