Andhra Pradesh being at the helm of government's ease of doing business index for states is well-known. What grabs eyeballs, however, is the fall in the rankings of some leading states. The recently released Reserve Bank of India (RBI)'s handbook of statistics on Indian states captured their rankings over the last three years. DIPP, Ministry of Commerce and Industry in collaboration with the World Bank conducted an annual reform exercise for all states and union territories under the Business Reform Action Plan (BRAP). The aim of the exercise is to improve delivery of various central government regulatory functions and services in an efficient, effective and transparent manner. States and UTs have conducted reforms to ease their regulations and systems in areas such as labour, environmental clearances, single window system, construction permits, contract enforcement, registering property and inspections. States and UTs have also enacted Public Service Delivery Guarantee Act to enforce the timelines on registrations and approvals. 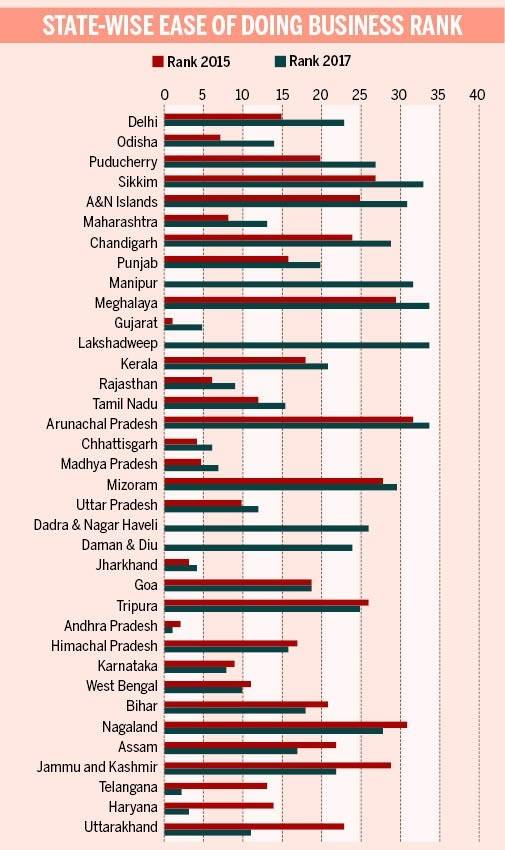 The state ranking is based on certain parameters, which track the ease of doing business in terms of various reforms undertaken by the states. "There is a build-up of competitive reforms, where each state is trying to improve its score by launching these reforms. This is a relative score scale and hence while some states do well in one year, others which bring in more reforms, are able to move ahead. A state like Haryana has been able to move up from a lower level, while some, which have attained a certain level of maturity, have not been able to bring in equal number of reforms," says Madan Sabnavis, chief economist, CARE Ratings

States tend to accelerate these reform points when they conduct investment summits, which try to get commitments from NRIs and other businessmen.

"It should be noted that this ranking is not related to an actual investment that takes place as it is driven more by opportunities, infrastructure, connectivity, access to finance and so on. Hence, states like Maharashtra, Karnataka, Gujarat and Tamil Nadu are still leaders in getting in actual investment while Odisha with its mineral wealth will get investment notwithstanding the relatively lower rank," adds Sabnavis.