The senior leaders of the coalition, Samyukta Kisan Morcha (SKM), said they will celebrate the foundation day of Khalsa Panth on the borders of Delhi. 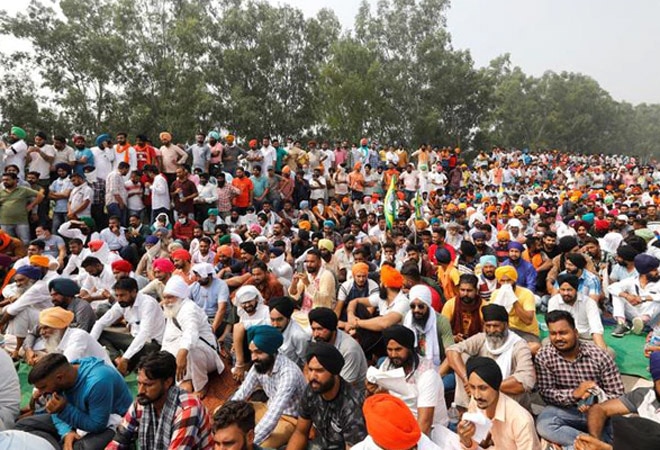 The agitation by farmers against the enactment of three laws to liberalise agriculture trade completed 134 days on April 9.

The coalition of agitating farmer organisations will block the KMP-KGP highway in the National Capital Region for 24 hours from 8 am on Saturday to press their demands for withdrawal of the contentious farm laws passed by the Centre last year.

The coalition has planned a series of protests and demonstrations throughout April and plan to expand the protests to other parts of the country in the coming months. A 'Parliament March' is also planned, though the groups have not yet decided the exact date for the programme.

The senior leaders of the coalition, Samyukta Kisan Morcha (SKM), said they will celebrate the foundation day of Khalsa Panth on the borders of Delhi and organise programmes in honour of the martyrs on the anniversary of the Jallianwala Bagh massacre on April 13. Next week will also see the protestors observe 'Save Constitution Day' and 'Kisan Bahujan Unity Day' on 14 April.

Indicating that the struggle is taking shape of a larger protest, senior SKM leader Darshan Pal said on April 14, all the stages of SKM will be managed by agitators of 'bahujan samaj' and all the speakers will also be 'bahujan'. The farmer groups also called for peaceful protests by people from various walks of life across Haryana against the BJP-led government's approach in the state towards the agitation.

"On this day, the Deputy Chief Minister of Haryana is deliberately organising a programme in Kaithal. We appeal to the farmers and Dalit-Bahujan to protest against this event by reaching maximum numbers while remaining peaceful," Pal said. "Honouring the participation and dedication of the local people in this movement, on April 18, local people will be honoured on the stages and the responsibility of managing the stage will also be given to the local people," he said.

On April 20, on the birth anniversary of mystic poet and devotee Dhanna Bhagat, the farmers will bring soil from his village Doha Kalan to the borders of Delhi, and programmes will be held on the Tiki Border in his memory. Similarly, on April 24, on completion of 150 days of the agitation at Delhi borders, the protestors will hold a week-long special programme which will see participation of farmers and labourers, employees, youth, traders, students and other organisations.

"In the last week of April, there will be a national convention of organisations supporting the farmers' movement across the country, in which plans will be made to intensify this movement nationwide", Pal said.

The agitation by farmers against the enactment of three laws to liberalise agriculture trade completed 134 days on April 9.

Sachin Waze sent to judicial custody till Apr 23, to get separate secure cell