This is first of a two-part series that highlights how growth is not working for the majority and wealth and income are increasingly concentrating at the very top 1% and 0.1%, at the cost of the rest GDP and its growth rate are mapped and released at regular intervals, providing quarterly and annual estimates

On April 16, the World Bank updated its cover note on 'Understanding Poverty' saying: "According to the most recent estimates, in 2015, 10 per cent of the world's population or 734 million people lived on less than $1.90 a day. That's down from nearly 36 per cent or 1.9 billion people in 1990. However, due to the COVID-19 crisis as well as the oil price drop, this trend probably will reverse in 2020. The COVID-19 crisis will have a disproportionate impact on the poor, through job loss, loss of remittances, rising prices, and disruptions in services such as education and health care."

The note ends with the following:

"Moreover, for those who have been able to move out of poverty, progress is often temporary: Economic shocks, food insecurity and climate change threaten to rob them of their hard-won gains and force them back into poverty. It will be critical to find ways to tackle these issues as we make progress toward 2030."

In many ways, these sentences carry many of the conundrums of economic growth, including the very fragile nature of it for the poor.

Growth in favour of top 1%

Earlier in the year, before COVID-19 locked down global economy, the Oxfam International's January 2020 'Time to Care' report exposed another facet of growth.

Its abstract began with this:

"Economic inequality is out of control. In 2019, the world's billionaires, only 2,153 people had more wealth than 4.6 billion people (60% of world population in 2019). This great divide is based on a flawed and sexist economic system that values the wealth of the privileged few, mostly men, more than the billions of hours of the most essential work - the unpaid and underpaid care work done primarily by women and girls around the world..."

Statistics show that most of the wealth has been sucked up to the top in recent decades. For example, the Credit Suisse's 'Global Wealth Report of 2019' says, the number of dollar millionaires worldwide went up from 13.88 million in 2010 to 46.79 million in 2019.

Ironically, India abolished wealth tax in the 2015-16 budget, months after French economist Thomas Piketty came out with his book 'Capital in the Twenty-first Century' that sparked global discussion on inequality and concentration of wealth at the top. He proposed wealth to be taxed at 15% worldwide and every year. Wealth tax was introduced in 1957 when Jawaharlal Nehru was the prime minister.

What is wrong with growth?

Both the World Bank note and Oxfam International's findings indicate that something is not quite right with the kind of economic growth everyone is chasing. It is overwhelmingly tilted in favour of the top 1% and inimical to the bottom 50% of the population and more.

This was not always so, at least not in the post-industrial world. Economic history tells us that the world rapidly progressed following the first industrial revolution in 18th century. Growth happened and barring some hiccups like the 1929 depression and 2007-08 recession, the global economy has been growing.

In the case of India, independence brought dramatic growth.

Economist Arvind Virmani wrote in his 2004 working paper 'India's Economic Growth: From Socialist Rate of Growth to Bharatiya Rate of Growth' that the average growth rate during 1900-1913 was 1.5%. It fell to 0.7% during 1917-1946 due to the impact of two World Wars, the 1929 Great Depression and other developments.

These facts are well known to economists but have gone out of public consciousness. Virmani, in fact wrote that this has been "widely" covered in economic literature of the time and the objective of his paper was not to examine this "acceleration" but identify policy failures and weakness that may have remained.

However, to club India's growth of that period (1950-1965) of mixed economy (both public and private sector powered growth) as a 'Socialist rate of growth' or 'Hindu rate of growth', which many economists and commentators do, would be unfair.

Growth slowed down subsequently but picked up pace with the liberalisation era that began in 1980s and received a big boost in 1991, touching the double-digit mark on many occasions. It, however, needs to be said that India never got another Nehruvian lift. For that to happen now, for example, the 4.2% growth rate of FY20 would have to jump to 24% (5.8 times high). 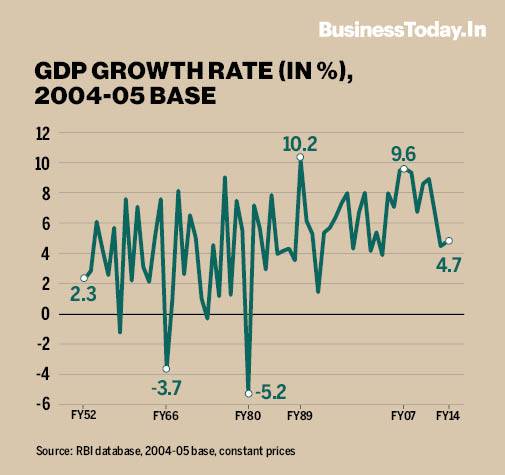 The question, however, remains. Why such high growths in the past several decades not wiped out poverty?

The World Bank's latest update on India (October 2019) says 50% or 659 million Indians live in poverty- they live on less than $3.2 or Rs 243 per day that the poverty line for a low-middle income country like India is.

India's topmost think tank Niti Aayog's December 2019 report 'SDG India: Index and Dashboard 2019-20' says hunger, poverty and inequality have grown in 22-25 states and union territories, out of the 28 it mapped.

Another worrying aspect of high growth is high inequality.

Here is what French economists Piketty and Chancel found when they studied India's income inequality (Oxfam International and Credit Suisse reports talked about wealth inequality), which was published in their 2017 book 'Indian income inequality, 1922-2015: From British Raj to Billionaire Raj?'

They also provided a breakdown.

Here is a graph on the income share of the bottom 50% that Piketty and Chancel present in their book. It shows a sharp rise in their share during the Nehruvian era, which continues into the early 1980s. And then it fell sharply. 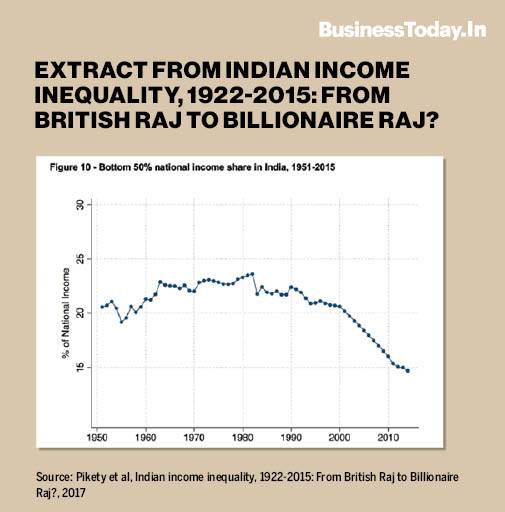 The Nehruvian era, thus, not only achieved a quantum jump in growth, but it was also fairer to the bottom 50% of population.

Why growth reduced inequality during 1950-1980 but increased during 1980-2015? What changed in those years? The answers can be found in different sets of policies that were adopted post-1980s but it raises questions about what constitutes growth and how it is measured. Since a uniform measure is adopted globally the questions are pertinent for other economies as well.

GDP as a measure of economic growth

The standard practice of measuring growth is gross domestic product (GDP) - as was used in the first graph. How do we know?

Here is an illustration. The last time India released its growth numbers, a Business Today headline on May 29, 2020, said: 'India's Q4 GDP growth falls to 3.1% - worst since 2009 global financial crisis'.

'Q4' here stands for the fourth (and last) quarter of FY20 - that is the three months of January, February and March 2020 (India's nationwide lockdown began on March 25). India counts its fiscal year from April 1 to March 31.

GDP and its growth rate are mapped and released at regular intervals, providing quarterly and annual estimates. The relevant data is released by the National Statistical Office (NSO) of the Ministry of Statistics and Programme Implementation (MoSPI).

How GDP came to be a measure of economic growth worldwide, why it measures what it does is a fascinating tale and that is critical to understanding some of the conundrums that growth presents. But that is in the next part.