Google wishes India on 73rd Independence Day with a Doodle

Google Doodle on 73rd Independence Day: The doodle portrays a 'patchwork' of traditional motifs from arts and culture to technology. 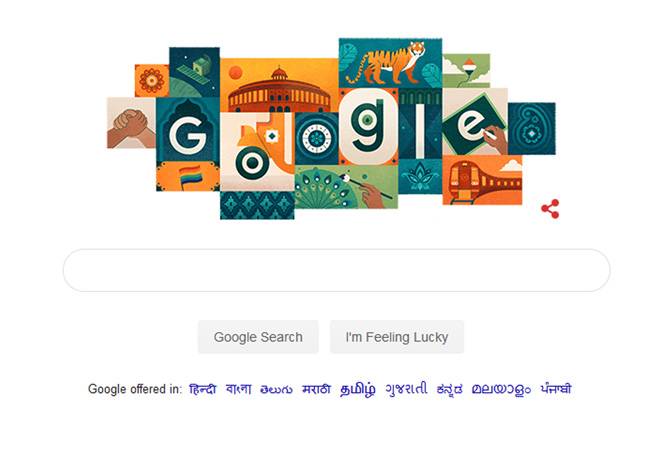 The Google Doodle today is an ode to India's 73rd Independence Day, celebrated every year on August 15. The doodle has been created by Shaivalini Kumar and depicts what makes India unique - how its tradition and culture go hand in hand with the country's development and modernisation. The doodle portrays a 'patchwork' of traditional motifs from arts and culture to technology.

The Google Doodle portrays some of the historic moments in the country's recent times. There is the doodle of a satellite, which is a nod to ISRO's stellar space missions, then there is the LGBT pride flag that acknowledges India's decriminalisation of homosexuality. The doodle also has a tiger, which is again a nod to India's doubling of the tiger count. There is a peacock plume and the Delhi Metro also.

Prime Minister Narendra Modi hoisted the Tricolour at Delhi's Red Fort. He delivered his sixth consecutive Independence Day speech on August 15 this year. Before heading to the venue, he wished all the fellow countrymen on Independence Day. "Happy Independence Day to all my fellow Indians. Jai Hind!," he said.

Modi, dressed in a white kurta-pyjama and a colourful turban, was received by Defence Minister Rajnath Singh at the Red Fort. He then inspected Guard of Honour. Before coming to Red Fort, he paid homage to Mahatma Gandhi at Rajghat.

India celebrated its 73rd Independence Day today. Parades and cultural events have taken place across the country on this special occasion. August 15 is a national holiday. Schools, colleges and offices are closed, however, every establishment has unfurled the Tricolour today.