INX Media case: What are the charges against P Chidambaram and son Karti

INX Media case: The decade old case pertains to alleged irregularities in the Foreign Investment Promotion Board's (FIPB) clearances granted under Chidambaram as the finance minister to INX Media, which is a media venture owned by Peter Mukerjea and his wife Indrani. 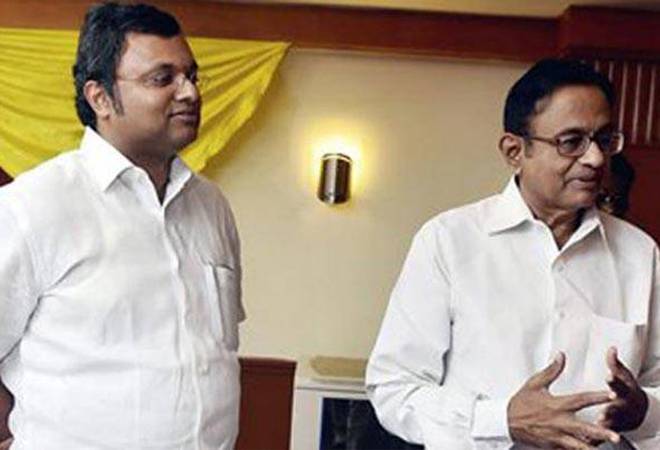 Former finance minister P. Chidambaram and his son Karti Chidambaram are facing investigation in the INX Media case filed by the Central Bureau of Investigation (CBI) and Enforcement Directorate (ED). After high-tension drama on Wednesday Chidambaram was arrested by the CBI in relation to the case. The veteran Congress leader will be produced before a special CBI court on Thursday morning.

The decade old case pertains to alleged irregularities in the Foreign Investment Promotion Board's (FIPB) clearances granted under Chidambaram as the finance minister to INX Media, which is a media venture owned by Peter Mukerjea and his wife Indrani.

The Mukerjeas had allegedly sought favour from Chidambaram's son Karti to help them in an Income Tax (I-T) Department investigation against the INX Media by using his father's clout to influence the probe against the company. The investigation pertained to the violation of the FIPB conditions to get investment from Mauritius.

Also Read: What is INX Media case; a look at the genesis of P Chidambaram and son Karti's misfortunes

In March 2007, INX Media had approached the chairman of Foreign Investment Promotion Board (FIPB), seeking approval for issuing equity shares to three non-resident investors based in Mauritius through the Foreign Direct Investment (FDI) route. The FIPB approval did come after two months, permitting INX Media to receive foreign funds amounting to Rs 4.62 crore. It, however, rejected the media company's other request seeking a downstream investment of foreign funds in its subsidiary INX News Pvt Ltd.

According to the CBI, the media company in its application to FIPB in 2007 also stated its intent to "make a downstream financial investment to the extent of 26 per cent of the issued and outstanding equity share capital of INX News Pvt Ltd, a subsidiary of INX Media." The CBI alleged the INX Media violated the conditional approval given by FIPB and brought in an FDI investment of around Rs 305 crore in the company as against an approved amount of Rs 4.62 crore.

As per the CBI FIR filed against the company, its directors and other involved parties in May 2017, "INX Media deliberately and in violations of the conditions and approval" went ahead with the downstream investment and generated FDI exceeding Rs 305 crore in the company "by issuing shares to foreign investors at a premium of more than Rs 800 per share" between August 2007 and May 2008. The foreign firms allegedly bought each share for Rs 862.31, a price that was more than 86 times its face value.

The Enforcement Directorate subsequently lodged a money laundering case against INX Media and related parties in 2018.

1. Chidambaram who was the finance minister in 2007 under UPA-1 came under the scanner of both CBI and ED in connection with the FIPB clearance.

2. The CBI later alleged that rather than investigating the case, the FIPB under then finance minister Chidambaram gave undue favours to the media company by asking INX News to submit its application for fresh FIPB approval on the downstream investment that it had already obtained.

3. The probe agency backed its case with a statement from Indrani Mukerjea, who recently turned approver in the case. According to her, INX Media got a favourable deal after she met with Chidambaram seeking FIPB clearance in 2008.

4. Chidambaram was also questioned by the ED in January this year and on December 19 last year in connection with the case.

5. The Delhi High Court on Tuesday refused to grant him anticipatory bail, saying he seems to be the "kingpin" and "key conspirator" in the INX media case of money laundering and he needs to be interrogated in custody for the investigation to be effective.

1. Karti Chidambaram allegedly took kickbacks to help INX Media in an I-T Department investigation back in 2008. The Financial Intelligence Unit (FIU-IND) of the Finance Ministry had flagged irregularities in the money flow to INX Media.

2. As it involved foreign fund, the Income Tax Department in Mumbai forwarded the case to the Enforcement Directorate (ED), which began probing the flow of fund to see if money was laundered.

3. The CBI alleged that Chidambaram's son Karti took the money from INX Media and used his influence to manipulate a tax probe against the company in regard to a violation of FIPB conditions to get investments from Mauritius.

4. When the Income Tax Department sought clarification on the above in February 2008, INX Media allegedly sought to wriggle out of the mess by offering kickbacks to Karti to leverage on his family name to scuttle the probe. The CBI alleged that Karti had received funds to the tune of Rs 10 lakh in the case - during its searches at the homes and offices of junior Chidambaram, sleuths reportedly recovered vouchers for this amount issued in favour of Advantage Strategic Consulting (P) Limited, a firm "indirectly" owned by him.

5. The probe agency found the documents in the computer of Karti's CA Bhaskarraman, which indicated towards remittances made to Karti's alleged associate company by INX Media. These payments were made at the time of Finance Ministry's FIPB approval to the company (INX Media).

Also Read:INX Media case: What legal recourse Chidambaram has after his arrest

7. In March 2018, Indrani Mukerjea told the CBI in a statement recorded under Section 164 of the CrPC that a deal of $1 million was struck between Karti Chidambaram and the Mukerjeas to secure approval from the FIPB in favour of INX Media. Last month, a Delhi court had allowed Indrani Mukerjea, who is a prime accused in the murder of her daughter Sheena Bora, to turn approver in the INX case.

8. In her application to turn approver, Mukerjea had prayed for pardon in the case in exchange of full and true disclosure.

Twitter service faces outage in India for an hour