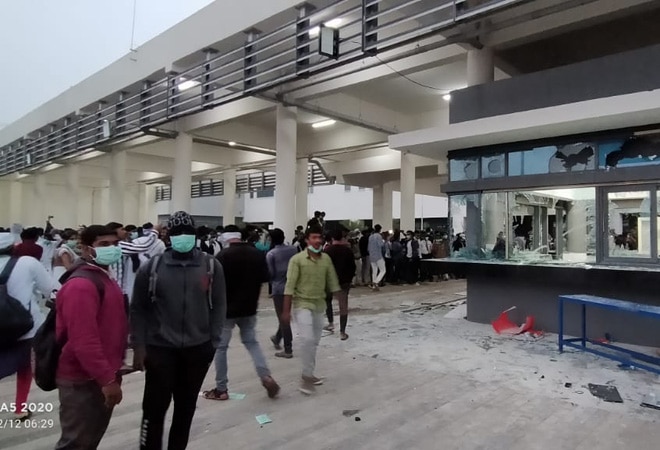 Wistron Infocomm Manufacturing (India) has estimated that the total loss incurred by the company during the violence on Saturday amounts to Rs 437.70 crore. Thousands of workers ransacked the Narasapura industrial area around 6am. As of Sunday, the police had arrested 128 people in connection with the violence.

Administrative officer Prashanth TD had said in his complaint that a group of outsiders armed with iron rods and clubs forced its way into the premises and targeted the HR block first.

A senior police officer said that the attackers breached the four main entrance gates, ransacked offices, smashed lockers and desks and destroyed documents containing details of employees. Once they were inside they were joined by contract workers who have been demanding pending wages of three to four months and overtime pay. The officer said, "We have intensified our probe to identify the ring leaders of the armed mob, based on the complaint filed by Wistron."

According to a report in The Hindu, security guards tried to stop the crowd but were allegedly beaten up. Even though a contingent of police arrived on scene, they were overwhelmed by thousands of workers. Four cars and two golf carts parked within the premises, estimated to be around Rs 60 lakh were set on fire.

Once the offices were ransacked the workers moved to the production unit where employees' phones kept in the lockers and other valuables were looted. Computers, printers and CCTVs were allegedly smashed. Thousands of smartphones that were being readied for production were also smashed.

Employees of a Taiwanese company vandalised Wistron office situated in Narasapur Industrial Area in Kolar district of #Karnataka, on Saturday.The incident occured over the non-payment of salary dues for several months.The company deals with manufacturing of Apple iPhones in India pic.twitter.com/6xxncCLPte

Meanwhile, the police had arrested around 128 people who took part in the protest. Round 300 people have been detained for questioning. "We have had information on the people who instigated the attack . They are on the run and efforts are on to track them down," the senior police officer said.