Lauding the team of scientists led by ISRO chief K Sivan, who was extremely disheartened after the mission setback, PM Modi said the best was yet to come 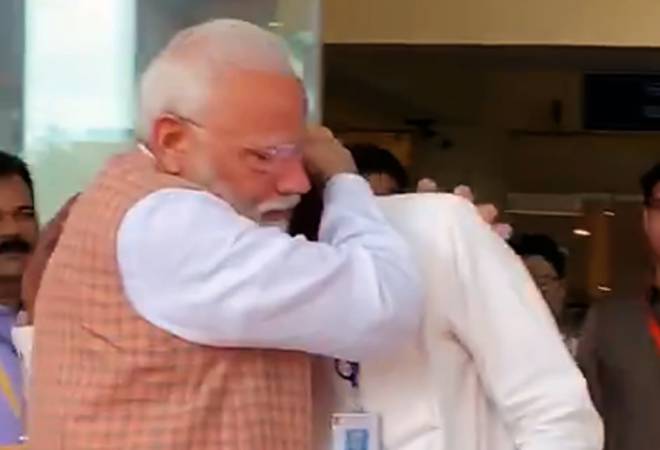 Prime Minister Narendra Modi, who was closely watching every development on India's most-ambitious moon mission, Chandrayaan 2, on Saturday appreciated the Indian Space Research Organisation (ISRO) scientists, and said despite the snag just before the landing, a major part of the mission was successful. Lauding the team of scientists led by ISRO chief K Sivan, who was extremely disheartened after the setback, PM Modi said the best was yet to come. India's attempt to create history by becoming the first nation to land on the South Pole of the Moon turned to despair after Chandrayaan 2 lander, Vikram, lost communication with the ground just before soft-landing. After the setback, Sivan, during his meeting with the PM, got emotional and PM Modi gave him a heartfelt hug, thanking the entire team for doing everything they could to make it a success.

Addressing the nation early morning on Friday, PM Modi said India was "proud of our scientists". "They've given their best and have always made India proud. These are moments to be courageous, and courageous we will be!" he said. He added the ISRO scientists came very close to create history but things didn't go as planned at the last minute. He said the India's space organisation had reached great heights and that India would rise to the occasion again. "We will rise to the occasion and scale newer heights of success. To our scientists I want to say- India is with you! You are exceptional professionals who have made an incredible contribution to national progress," PM Modi said.

While India fell short of creating history, all hopes are not lost yet, as the landing part constitutes 5 per cent of the entire Moon mission. As per an ISRO official, though hopes of re-establishing contact with the Vikram lander seems impossible, Chandrayaan 2's Orbiter is successfully orbiting the Moon and would continue to do remote sensing observations from 100-km orbit. "The Orbiter is healthy, intact, functioning normally and safely in the Lunar orbit," the official told news agency PTI. The mission life of the 2,379-kg Orbiter is one year.

The instruments on the Orbiter are meant to map the lunar terrain, examine the intensity of solar radiation, as well as examine the presence of major elements such as Magnesium, Aluminium, Silicon, Calcium, Titanium, Iron, and Sodium. It will also conduct a quantitative estimation of water-ice in the polar regions of the Moon. Even as all hopes of re-establishing contact with the Vikram lander seems impossible, only five per cent of the mission is lost, the official told the news agency.