Trump India visit Day 1: The workers gave the Trumps a demonstration of the spinning wheel- the Charkha and how Gandhiji used it to weave 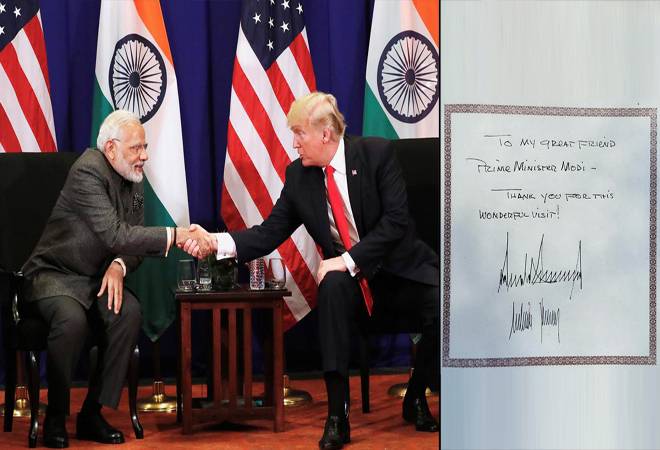 Following their visit to the Sabarmati Ashram, President Donald Trump and First Lady Melania Trump called Prime Minister Modi a "great friend" in their note on the visitor book. Both the POTUS and the First Lady also thanked PM Modi for the wonderful welcome.

Gujarat: US President Donald Trump writes a message in the visitors' book at the Sabarmati Ashram, 'To my great friend Prime Minister Modi...Thank You, Wonderful Visit!' pic.twitter.com/mxpJbSMg4W

The US President and the First Lady arrived at the Sabarmati Ashram after landing at the Ahmedabad airport. The workers gave the Trumps a demonstration of the spinning wheel- the Charkha and how Gandhiji used it to weave.

PM Modi also gave the President a tour of the ashram and showed him 'Hriday Kunj'- the room where Gandhiji and his wife Kasturba Gandhi lived during the freedom struggle. PM Modi also explained the significance of the place. Prime Minister presented the US President with the "Three Wise Monkeys". He was presented with a larger version of the one that Gandhiji owned.

POTUS is on a two-day official visit to India and will cover 3 Indian cities- Ahmedabad, Agra and Delhi as a part of his tour. Accompanied by PM Modi, the POTUS also addressed the mega-event at the Motera stadium.

After the event at the Motera stadium PM Modi, the US President and the First Lady will leave for Agra to visit the Taj Mahal. Trump will fly back to Washington on February 25.

Coronavirus: Passengers from more countries to be screened at Indian airports