CAA Protests in Delhi:  Officials at Guru Teg Bahadur hospital told agencies the death toll had risen to 20. Hundreds of people have been injured in the violent clashes in Northeast Delhi 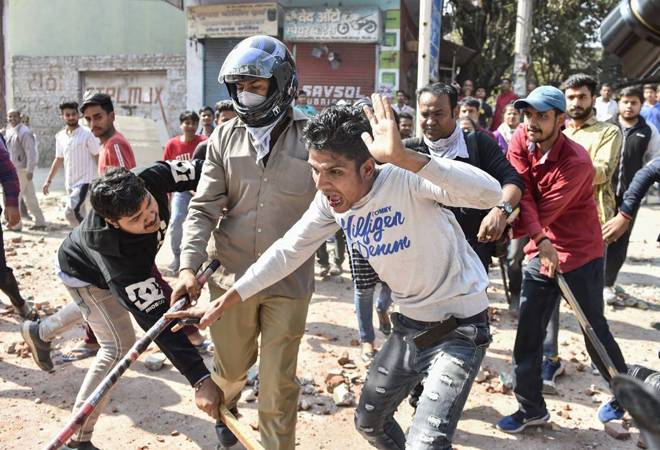 As death toll in the violent clashes between pro and anti-CAA (Citizenship Amendment Act) in Northeast Delhi touches 20, leaders across India have condemned the incidents, slamming the ruling governments for failing to control the situation.

Deputy CM of Delhi Manish Sisodia said he had never felt scared in his own city before. "Been in Delhi since 30 years. Never felt so scared in my own city. What is happening? Who are these people who are burning down Delhi? I am really saddened and embarrassed today. This is Delhi-the national capital. We have to save it," Sisodia tweeted in Hindi.

Delhi CM Arvind Kejriwal also tweeted about meeting the victims at the GTB Hospital and Max Hospital on Tuesday. In the same tweet, he urged people to end "this madness".

Met with victims of violence being treated at the GTB Hospital and Max Hospital. Hindus, Muslims, policemen - none have escaped unhurt.. this madness must end immediately pic.twitter.com/Nh2VI6BRTG

The violence today in Delhi is disturbing & must be unequivocally condemned. Peaceful protests are a sign of a healthy democracy, but violence can never be justified. I urge the citizens of Delhi to show restraint, compassion & understanding no matter what the provocation.

Whether the violence in East Delhi was instigated (MOS-Home) or spontaneous (MHA), the government has a duty to end the violence.

Permanent Member of the Congress Working Committee (CWC) Randeep Singh Surjewala expressed anguish at the anti-CAA riots in Northeast Delhi district. Surjewala also shared a snap of the CWC observing silence in memory of all those who lost their lives in the violent clashes.

CWC observes silence in memory of those who have lost their precious lives in #DelhiRiots! pic.twitter.com/2m3vtnepGy

Shocked & concerned about the #DelhiViolence. Urge @AmitShah and @ArvindKejriwal to sit together and resolve the crisis immediately to prevent the situation from escalating further in the larger interest of the national capital & the country.

Congress leader from Madhya Pradesh, Jyotiraditya Scindia tweeted, "The Delhi Violence is disturbing, senseless and undoubtedly condemnable. Under no circumstance is violence ever acceptable! I urge the protesters to exercise restraint."

Leader of Opposition in the Tamil Nadu Legislative Assembly and DMK President MK Stalin said the violence in Delhi had reached alarming proportions with gruesome attacks on citizens and journalists. "The Union Govt, which controls police in Delhi, must act swiftly to book perpetrators of violence and restore normalcy. Democracy is at peril," he tweeted.

How can we allow these children of hate to run amok in my United and diverse India.

Please return to reason, before it is too late.

No religion propagates hate, only people do.

India has survived such madness before, I sincerely hope it will again.

As the situation in national capital remains tense, where are the Prime Minister and the Union Home Minister? Both are missing. Incompetence or complicity? https://t.co/GtdeninPu4

Meanwhile, the officials at Guru Teg Bahadur hospital told agencies the death toll had risen to 20. Hundreds of people have been injured in the violent clashes in Northeast Delhi, including two media persons from a private news channel.

NCLAT judgment brings hope for homebuyers, but will it pass the legal test?