The document boasts his impeccable academic records, key positions at Harvard, Princeton universities and several articles, as well as his books. The CV can be accessed on the Massachusetts Institute of Technology (MIT) website. 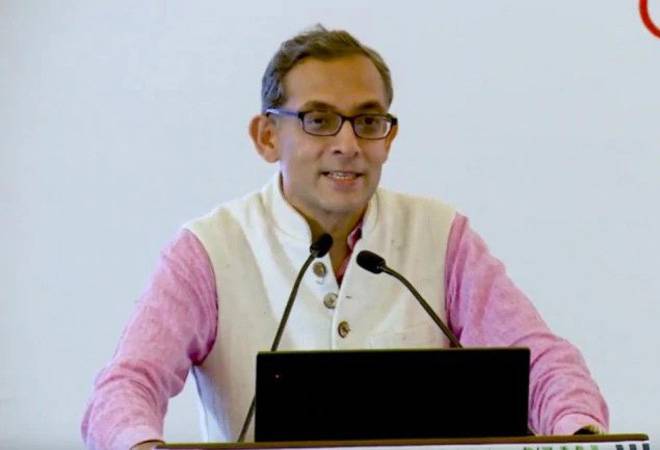 Indian-American Abhijit Banerjee, who won the Nobel Prize in Economics along with two others, has a 17-page long CV.

Indian-American Abhijit Banerjee, who won the Nobel Prize in Economics along with two others, has a 17-page long CV. The document boasts his impeccable academic records, key positions at Harvard, Princeton universities and several articles, as well as his books. The CV can be accessed on the Massachusetts Institute of Technology (MIT) website.

The detailed document begins with Banerjee's immaculate academic credentials on page one.

Abhijit Vinayak Banerjee (his full name), 58, was born in Mumbai (India) and attended South Point School in the city. He went to Presidency College, Calcutta, where he completed his BS degree in Economics in 1981. He completed his M.A. in Economics at the Jawaharlal Nehru University, Delhi in 1983. He was awarded a PhD in Economics at Harvard in 1988. Banerjee wrote his doctoral thesis on 'Essays in Information Economics' and received his doctorate in 1988.

The CV goes on to chronicle his fellowship and honors in various capacities. Banerjee is the former president of the Bureau for the Research in the Economic Analysis of Development, a research associate of the National Bureau of Economic Research (NBER), a Center for Economic and Policy Research (CEPR) research fellow, a fellow of the American Academy of Arts and Sciences and the Econometric Society, International Research fellow of the Kiel Institute, an Alfred P Sloan fellow and a winner of Infosys prize.

Page two of the CV details academic positions Banerjee has held. He is currently the Ford Foundation International Professor of Economics at Massachusetts Institute of Technology. He had also taught at Harvard University and Princeton University from 1991-1993.

Banerjee is a co-founder of the Abdul Latif Jameel Poverty Action Lab along with economists Esther Duflo (his wife) and Sendhil Mullainathan, a research affiliate of Innovations for Poverty Action, and a member of the Consortium on Financial Systems and Poverty.

The CV further articulates Banerjee's stints at various panels and working groups. Amongst various positions he held at several organisations, Banerjee has served as a member of the UN Secretary-General's High-level Panel of Eminent Persons on the Post-2015 Development Agenda.

Other important stints he held as mentioned in his CV are member, Panel for the Evaluation of World Bank Research, member, Advanced Market Commitment Working Group, Center for Global Development, member of Board of Editors, Journal of Economic Literature etc.

Page 3 of the 17-page CV details Banerjee as an author of several articles and four books.

His book 'Poor Economics' won the Goldman Sachs Business Book of the Year Award in 2011. The book has more than 17 language translations. He also shared the Gerald Loeb Award Honorable Mention for Business Book with his wife Esther Duflo for the book in the year 2012.

Banerjee and his wife's new book 'Good Economics for Hard Times: Better Answers to Our Biggest Problems' will release soon.

The CV further points at Banerjee's other talents as an editor and a documentary filmmaker. He has edited three more books and directed two documentary films: 'The Magnificent Journey: Times and Tales of Democracy (co-directed with Ranu Ghosh) in 2019 and 'The Name of the Disease' in 2006.

Page 4 to 13 details various journal articles and working papers Banerjee wrote from 1984 to 2019. His first article was 'Dual Exchange Rate' which was published in December 1984 in Economic and Political Weekly.

His latest work is "The Efficient Deployment of Police Resources: Theory and New Evidence from a Randomized Drunk Driving Crackdown in India" which he co-authored with wife Esther Duflo, Daniel Keniston and Nina Singh. The paper was released in August this year.

Banerjee has also written several chapters in various books and discussion papers from 1990 till 2017. His first work was published by Oxford University Press in 1990.

The last page of Banerjee's CV details his unpublished manuscripts which have not been published yet. The first as mentioned in his CV was "On Frequent Flier Programs and Other Loyalty-Inducing Arrangements," (with L. Summers) which he wrote for Harvard International Economic Research Discussion Paper in 1987.

The last one was a background paper for a World Bank report in 2003.

'When I say my country, it is always India,' says Nobel Prize winner Abhijit Banerjee