Surgical Strike 2.0: Pakistan MoFA spokesperson said that the sole purpose of the PAF strikes is to demonstrate their right, will and capability for self defence. Pakistan's DG ISPR Major General Asif Ghafoor said today that two Indian aircraft were shot down inside the Pakistan airspace. He also said that one Indian pilot was arrested by troops on the ground. However, there are no pictures yet of the pilot for Pakistan's claim to be confirmed.

DG Ghafoor said that one of fell inside Pakistan-occupied Kashmir and the other fell inside Indian territory. According to reports, a Pakistan F-16 fighter jet was also shot down by the Indian Air Force. The aircraft was shot in the Pakistan territory in Lam district, Nowshera sector. A parachute was seen as the F-16 went down but the condition of the pilot is still unknown, reported ANI.

Pakistan army claims to have found these documents from the Indian pilot. 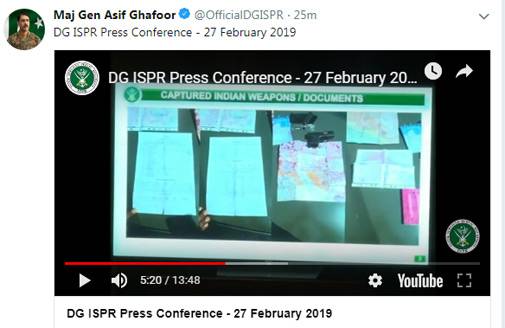 The Pakistan Foreign Ministry spokesperson said, "Today, Pakistan Air Force undertook strikes across Line of Control from within Pakistani airspace. This was not a retaliation to continued Indian belligerence. Pakistan has therefore, taken strikes at non military target, avoiding human loss and collateral damage. Sole purpose being to demonstrate our right, will and capability for self defence. We have no intention of escalation, but are fully prepared to do so if forced into that paradigm. That is why we undertook the action with clear warning and in broad daylight. For the last few years, India has been trying to establish what they call "a new normal" a thinly veiled term for doing acts of aggression at whatever pretext they wish on a given day. If India is striking at so called terrorist backers without a shred of evidence, we also retain reciprocal rights to retaliate against elements that enjoy Indian patronage while carrying out acts of terror in Pakistan. We do not wish to go to that route and wish that India gives peace a chance and to resolve issues like a mature democratic nation."

Following the latest developments, airports in Leh, Jammu, Srinagar and Pathankot have been put on high alert. Their airspace has been suspended due to security reason and many commercial flights have been put on hold. Similar developments have taken place in Pakistan were domestic and international flight operations from Lahore, Multan, Faisalabad, Sialkot and Islamabad airports have been stopped.

Additionally, international flights transiting between Indian and Pakistani airspace are now being affected as some flights have returned to their origin, while others are seeking alternate routing.