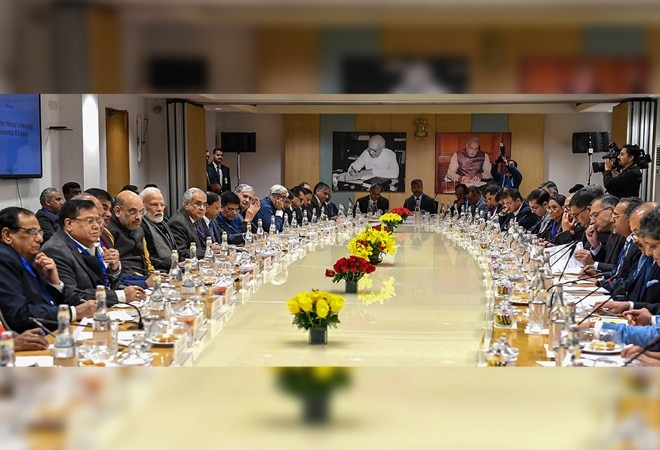 Prime Minister Narendra Modi has stressed on better governance and implementation for realising the dream of $5 trillion economy. Addressing a meeting of economists and industrialists at Niti Aayog today, the Prime Minister said that the idea of $5 trillion economy is not a sudden development and that it is based on a deep understanding of the strengths of the country.

He said that governance is very critical, and implementation of government's policies needs especial focus. He said that there are enough gaps to be filled in implementation (of the schemes). For instance, he said, funds allocated under National Rural Employment Guarantee Scheme (NREGS) can be used by states for the most needy.

He said that open discussions and brainstorming in such forums lead to a healthy debate and understanding of the issues. He also welcomed constructive criticism to be able to do better than what he can presently do.

The meeting was attended by 38 delegates, including economists, industrialists and venture capitalists. The delegates spoke about the issues their respective sectors are facing and what the government can do to address those issues. Economists largely talked on reviving the investment cycle, creating employment and cleaning up the system.

According to a person who attended the meeting, all delegates spoke for one-two minutes, the Prime Minister and his cabinet colleagues present in the meeting listened to each speaker attentively, and the secretaries present there were taking notes.

The person mentioned above said that the Prime Minister promised that even if all the suggestions given by the speakers do not translate into policies, he would take note of them for future reference.

Stating that India is a land with unlimited possibilities, he requested all stakeholders to do their bit to bridge the gap between reality and perception.

He said, "We must all work together and start to think like a nation."

Meanwhile, Finance Minister Nirmala Sitharaman, whose absence from the meeting had triggered rumours of her being sidelined, was busy from 10:30 am till 2 pm in back-to-back meetings with four groups. One was a media interaction along with BJP leaders, followed by deliberations with the office-bearers of various morchas or wings of BJP. The third meeting was with representatives of think tanks, and the fourth one was a presentation by BJP leadership on the outcome of the party's pre-budget consultations with various sectors carried out by its economic affairs wing.