A few states posted almost nil or flat growth in their rural wages during the last two fiscals. Haryana and Tripura saw no increment while Meghalaya and Madhya Pradesh recorded a sub 1 per cent rise Rural households in more than 40 per cent Indian states apparently have an economically inferior status compared to the country as a whole, going by the RBI's latest handbook of statistics on states. Rural wages which determine the livelihood status of rural homes strike a somber note. The average wage rate for male agricultural labourers in rural India has gone up by almost 28 per cent, from Rs 224.6 in FY15 to Rs 286.6 in FY20. The state-wide performance was rather cringeworthy with nine out of 19 states, or close to 50 per cent of them still struggling to grow at par with the nation. These include states such as Assam, Haryana, Jammu & Kashmir, Kerala, Maharashtra, Punjab, Rajasthan, Tamil Nadu and West Bengal.

Incidentally, a couple of them have seen a rise in their gross state value added (GVA) by agriculture between 5-21 per cent, in last five years - West Bengal grew 18 per cent, Haryana 20.7 per cent, Punjab 9.1 per cent and Rajasthan 5.5 per cent. Tamil Nadu was the only exception whose agriculture GVA declined by 2.7 per cent.

Further, over the last five years, some states posted an average wage rate growth of less than 20 per cent, namely, Haryana (15.2 per cent) and Maharashtra (17.3 per cent). Rajasthan witnessed the slowest growth of 10.3 per cent during the period. 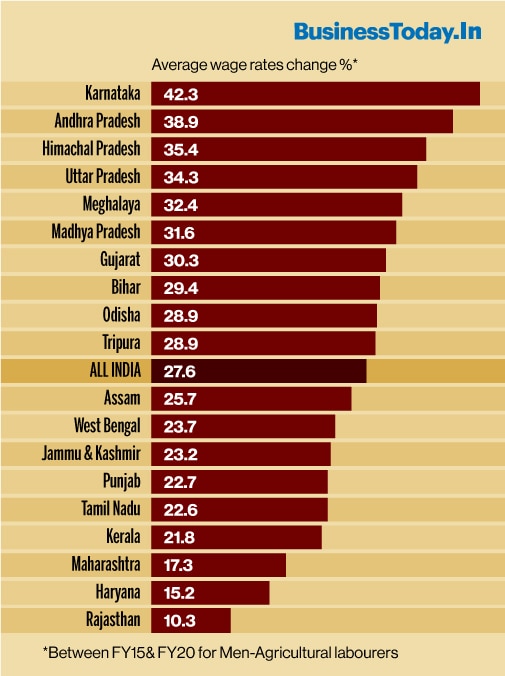 Another gruesome fact. A few states posted almost nil or flat growth in their rural wages during the last two fiscals. Haryana and Tripura saw no increment while Meghalaya and Madhya Pradesh recorded a sub 1 per cent rise. The all India average wage has been slowing over the past three years and rose to 3.3 per cent in FY20. Moreover, the average wage rate for male non-agricultural labourers in rural India has increased nearly 24 per cent between 2014/15 and 2019/20. Around eight states, which include the above-mentioned ones, recorded the growth below the national average.

Also Read: Why Bangladeshis will soon be richer than Indians