In a handwritten letter to NIA, suspended Mumbai Police officer claimed that Maharashtra ministers Anil Deshmukh and Anil Parab asked him to illegitimately collect money for them 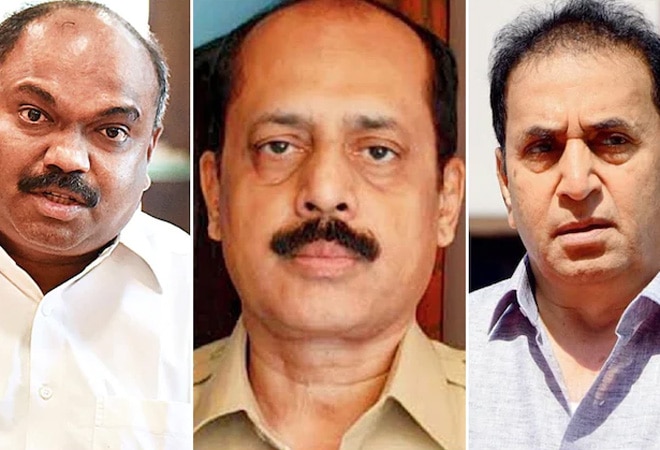 In his letter to the NIA, suspended Mumbai Police cop Sachin Vaze has accused both Anil Deshmukh (right) and Anil Parab (left) of asking him to collect money from local businesses

In a handwritten letter to the National Investigation Agency (NIA), Sachin Vaze has alleged that NCP supremo Sharad Pawar was against his reinstatement into Mumbai Police last year and wanted it to be repealed.

Following this, the then state Home Minister Anil Deshmukh allegedly told Sachin Vaze that if he pays Deshmukh Rs 2 crore, he will persuade Pawar to let Sachin Vaze back into the force.

"The home minister told me that he will convince Pawar saheb and for that purpose, he asked me to pay Rs 2,00,00,000. I had expressed my inability to pay such an amount. On this, the home minister asked me to pay it in a later course," Sachin Vaze wrote in the letter. The tainted cop also claimed that Anil Deshmukh had called him to the Sahyadri Guest House in October 2020 and asked him to collect money from 1,650 restaurants and bars in Mumbai. "I refused saying it was not within the scope of my capability," Sachin Vaze stated.

According to him, Anil Deshmukh put forward the same demand again in January 2021 when the two met at Deshmukh's official residence. Sachin Vaze has alleged that the minister's PA Kundan was also present at the meeting as the then home minister asked him to collect Rs 3-3.5 lakh from each of the 1,650 restaurants and bars in Mumbai.

Sachin Vaze further claimed in the letter that Maharashtra Transport Minister and Shiv Sena leader Anil Parab had asked him to extort money for him. The suspended cop has claimed that Anil Parab met him in July-August 2020 and asked him to extort Rs 50 crore from the Saifee Burhani Upliftment Trust (SBUT), which was facing a probe.

"In July-August 2020, I was called by Minister Anil Parab at his official bungalow... At the meeting, Parab asked me to look into the complaint under preliminary inquiry and bring the trustees of the SBUT to him for negotiations about the inquiry. He also insisted to initiate primary talks to get Rs 50 crore from SBUT in order to close the said enquiry. I had expressed my inability to do any such thing as I do not know anybody from SBUT and also I did not have any control over the inquiry," Sachin Vaze told NIA.

He further alleged that Anil Parab also called him once again in January this year and asked him to delve into an investigation against some contractors listed in the BMC and collect Rs 2 crore each from them.

"He told me to collect at least Rs 2 crore from 50 such contractors. An inquiry was on in this matter based on an anonymous complaint. The Crime Intelligence Unit inquiry against the contractors had not yielded any result," Sachin Vaze wrote.

He also claimed that he had apprised then Mumbai Police Commissioner Param Bir Singh about the extortion demands by Anil Deshmukh and Anil Parab, but the latter reportedly told him not to act on the demands.

"...I met the Police Commissioner (Param Bir Singh) and told him that I expressed my apprehension about this...I told him that I would be embroiled in a false controversy in the near future. The CP encouraged me and categorically instructed me not to involve myself in any such illegal collection of money from anyone and for anyone," Sachin Vaze alleged.

The suspended Mumbai Police assistant inspector's letter substantiates some of the claims made by Mumbai Police officer Param Bir Singh, who, in his March 20 letter to CM Uddhav Thackeray, alleged that Anil Deshmukh had asked police officers, comprising Sachin Vaze, to collect Rs 100 crore each month from restaurants and bars.

Meanwhile, a Mumbai court on Wednesday extended the NIA custody of the suspended Mumbai cop till April 9 in the Antilia bomb scare case. The NIA arrested Sachin Vaze on March 13.

Also Read: Antilia case: What was in 5 bags Sachin Vaze carried to Mumbai hotel with mystery woman? Inside details here