The jets took off from France on July 27 and will arrive at the Air Force station on July 29, after covering a distance of 7,000 km with air-to-air refuelling and a single stop in the United Arab Emirates 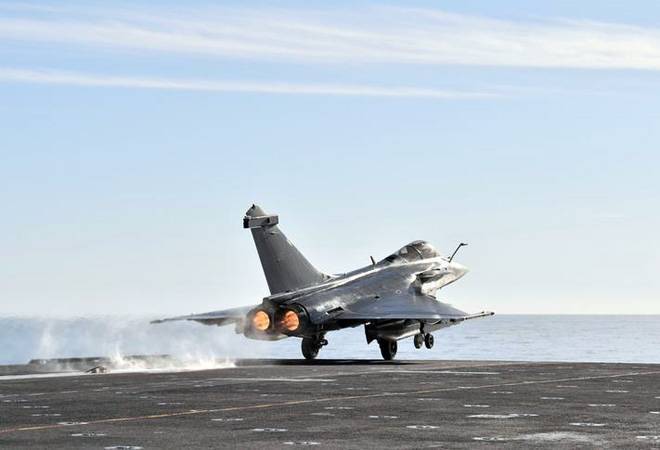 The fleet comprises three single-seater and two twin-seater aircraft, according to an IAF official

Authorities tightened security and imposed prohibitory orders near the Ambala Air Force Station in Haryana on July 28 ahead of the arrival of five Rafale jets from France, banning shooting of videos and photography. The Ambala district administration also prohibited people from flying private drones within the three-km radius of the air base, an official said.

Deputy Commissioner Ashok Sharma said in an order that Section 144, which prohibits assembly of four or more people, has been imposed in the villages adjoining the air base, including Dhulkot, Baldev Nagar, Garnala and Panjkhora. The jets took off from France on July 27 and will arrive at the Air Force station on July 29, after covering a distance of 7,000 km with air-to-air refuelling and a single stop in the United Arab Emirates. The fleet comprises three single-seater and two twin-seater aircraft, according to an IAF official.

The Ambala deputy commissioner said shooting of videos or taking photographs of the boundary wall of the air base and its adjoining areas will remain strictly prohibited during the imposition of the prohibitory orders. Haryana Home Minister Anil Vij said Ambala police have taken the necessary measures. The BJP leader and six-term MLA from Ambala Cantt said the people of Ambala are very enthusiastic and thousands would have come out on the streets to welcome the fighter jets before the touch down had there not been a pandemic.

BJP's Ambala City MLA Aseem Goyal urged to people to light candles in their homes between 7-7.30 pm on July 29 to welcome the Rafale jets. Nearly four years ago, India signed an inter-governmental agreement with France for 36 Rafale jets under a Rs 59,000-crore deal to boost the IAF's combat capabilities.

The first squadron of the Rafale jets will be stationed at the Ambala air base. The five Rafales are scheduled to be inducted into the IAF on July 29, though a formal induction ceremony would be held later. No 17 Squadron, the "Golden Arrows", has been resurrected at the Ambala base to operate the Rafale aircraft. The resurrection ceremony in September 2019 was presided over by then Air Chief Marshal B S Dhanoa, who had commanded the 17 Squadron during the Kargil conflict in 1999.

The IAF has undertaken major infrastructure upgrades at the Ambala base for the deployment of the first Rafale squadron. Built in 1948, the air base is located on the east side of Ambala in Haryana and is used for military and government flights. The air base has two squadrons of the Jaguar combat aircraft and one squadron of the MIG-21 Bison. Air Force Marshal Arjan Singh was the first commander of the base.